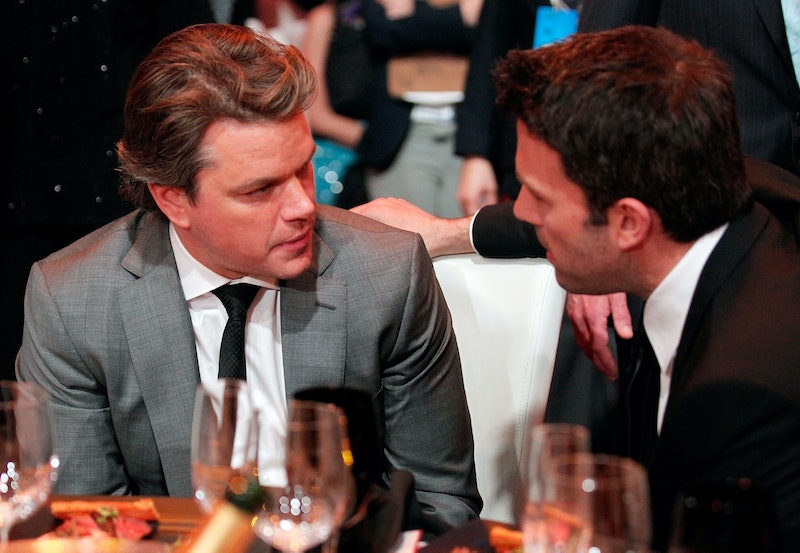 The members of one of the longest-standing bromances in Hollywood, Matt Damon and Ben Affleck, have both been hella busy lately. To the Internet's dismay, Ben Affleck was revealed to be the next Batman in Zack Snyder's upcoming Batman vs. Superman, his follow-up to this year's Man of Steel. There was literally a petition started to oust Affleck from the role of Batman, a harsh invective stating that he didn't have the acting chops (despite his Oscars).

But have no fear, Matt Damon came to his buddy's defense, griping, "You know, he's not playing King Lear. It's Batman!" Damon, Affleck's longtime true soulmate and writing partner, has been busy, too, though. After starring in this summer's Elysium, it's now rumored that Damon has landed a role in Christopher Nolan's upcoming, super-secret Interstellar. He's also got a cameo in Terry Gilliam's The Zero Theorem, which premieres soon at the Venice Film Festival. And there are still rumors floating about that there will be yet another Bourne movie to come. Good for you, Matt Damon! You go, Matt Damon!

However, it seems like Damon is jealous of his bro Affleck's directorial credit on Argo, 'cause he just signed to direct A Murder Foretold, a movie based on a 2008 New Yorker article about violence in Guatemala. The film was written by Chris Terrio, who wrote Argo, which was directed by none other then Ben Affleck. Oh, how small the world is! Is all this busy work a competition between friends? Are Matt Damon and Ben Affleck locked in a silent, grueling battle to come out on top? We'll never know. I wish they'd cowrite a movie about this.