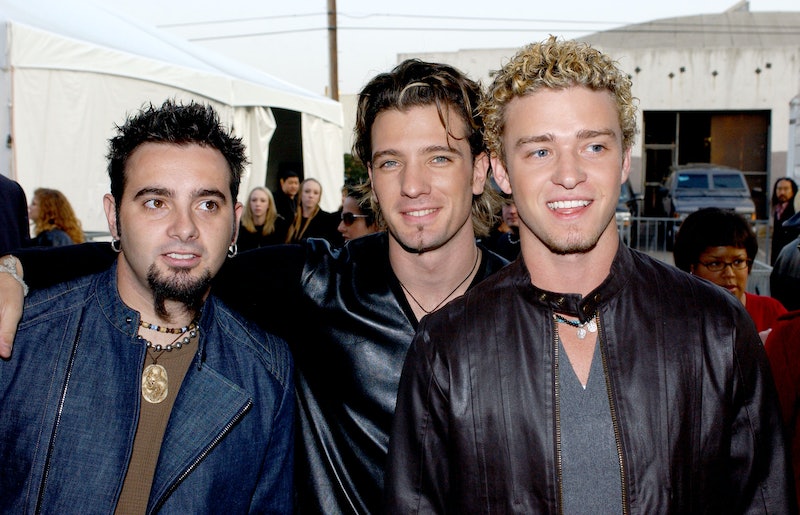 The '90s were an interesting time for fashion. Among the general population, grunge was in style and colorful layers were all the rage. Among the boy bands, however, it was all highlights and parting your hair straight down the middle. Don't get me wrong. My love for 'N Sync over the Backstreet Boys had almost nothing to do with which band had the best hair. I wasn't that shallow. (I was looking at their faces, okay?) But looking back at my torrid childhood obsession with boy bands, it all looks like random flashes of good music and bad hair. Like, really bad hair. Like, really, really, really bad hair.

Not every boy band had hair that was the stuff of nightmares, however. Some of them were strange, but not bad per se. Some of them were pretty decent for their time. Some of them still kind of look good, if you compare their hair to that of the others. All I'm saying is, when you look at old pictures of your favorite boy band, are you laughing for a reason other than their out-of-style clothes or cheesy poses? Are you laughing because you don't remember their hair looking quite that...interesting? Sounds like it's about time to do a ranking of boy band hair, from the good to the bad to the what is going on here.

Objectively, there's nothing really wrong with Nick Carter's hair. Sure, it's too blond, but highlights were all the rage back in the '90s. It's mostly in the way he chose to part it. That forehead would have benefitted from some bangs, okay? Luckily, he got the memo later on in his musical career.

Remember when Nick Lachey had blond highlights? Neither did I. He looks better as a brunette, but this definitely wasn't the worst look for him.

Those side burns though.

A perm with blond highlights? The real question here is, did that make our fair Justin Timberlake any less hot? I would answer yes, but many 'N Sync fans would answer no. After all, if you can croon "dirrrrrrty pop" with that hair and still make girls everywhere swoon in front of you, I think you've got the It factor.

Lil' Fizz (left) had a hair game that was too strong for the rest of B2K to handle. That's probably why Omarion spun off into a solo career. He couldn't handle not having the coolest hair in the band anymore.

And sometimes you only really need to highlight the top of your head. Apparently. I don't know.

I don't know whether it was a personal choice or their record label's decision to let Hanson debut like this, but between the flowing hair and the middle parts, this was the height of hippie chic. They still look adorable, though.

I'm looking at you on the right, trying to hide what might be a bald spot by layering that area with blond highlights. I am more curious as to why only a splash of your hair is blond than I am about whether or not your hairline is receding though, so I guess it worked.

The dreads I understand. The dreads I'm fine with. What I'm not fine with is the blond highlights in the dreads. And only some of them, not even just dyeing all the tips. I don't know what I'm looking at here.

Do I even need to specify which one of these band members I'm talking about? Unlike the guy from O-Town, Jones at least went to the trouble of dyeing all of his tips blond. However, I don't understand the twin pigtails he gathered those blond-highlighted dreads into. Was this the fashion back then?

What is this beard situation?

I'm not even going to pretend to understand what Bennett was going for here. My real question is why he chose to line one of the three hairs hanging over his forehead with beads. Why the beads? I don't understand the beads. But they're nice beads, I'll give you that.

What is this Fabio look that you have going on here, JC Chasez? I'm not judging, but...okay, I'm judging a little. Admittedly, your perm is a lot longer and a lot more flowy than Timberlake's was, but still. No.

I know spiky hair is a legitimate fashion trend that still continues to this day, but I feel like this is kind of extreme. And by extreme, I mean wow, did we really wear our hair like this in the '90s?

Dream Street may have only existed for two seconds and people might only mostly remember Jesse McCartney, but let's not neglect to remember that this hairstyle was going on. This happened and we let it happen, guys.