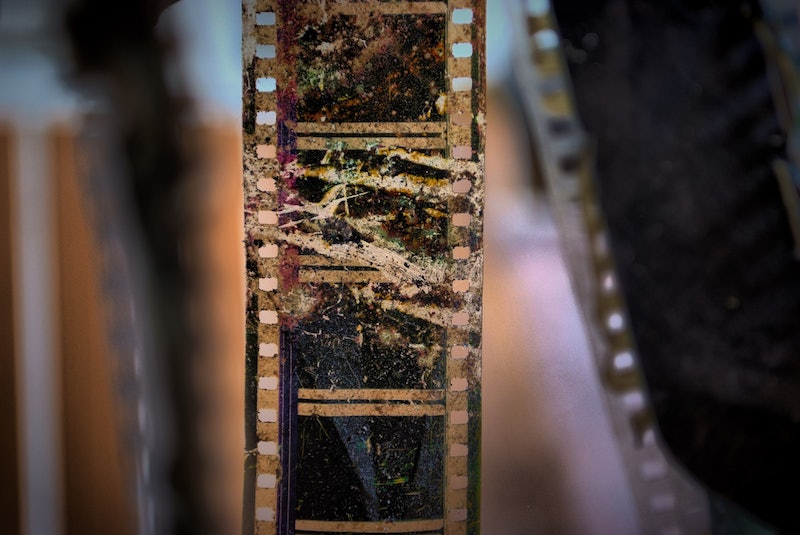 I love reading spooky stories and legends, but very rarely am I legitimately creeped out by words alone. There’s something about an image placed just right, though — a turn of the head, a shadow caught out of the corner of your eye, a brief flash of something you wish you hadn’t seen — that really gets to me. And since it’s almost Halloween, there’s no time like the present to spend a few minutes watching something that will ensure you won’t sleep soundly for a few nights, is there? Accordingly, here are eight of the creepiest videos on the Internet, hand-picked by yours truly. I watched them so you don’t have to… but let’s face it: You wouldn’t be reading these words if you didn’t intend to watch them yourselves.

I’ve generally stayed away from gore in my choices, because honestly, I just don’t find it that interesting; I’ve also avoided things that edge into the territory of exploitative, like real-life 911 calls. But what remains is no less odd: Some of them are short films; some of them are unexplained phenomena; and some of them are just plain weird. All of them have stuck with me, though, so now I impart the most bizarre examples of that most ephemeral quality to you, Gentle Readers. Be warned: What has been seen cannot readily be unseen.

Don’t watch this one if you ever want to be able to sleep with the lights off ever again. Seriously. Don’t do it. If you’re curious about how they accomplished the last shot, you can see how they did it here — but I think it takes a little of the punch out of it. Where’s the fun in that?

I first saw this one, directed by Drew Daywalt, on the now seemingly defunct FEWDIO YouTube channel a few years back. I then proceeded to lose an entire evening to that channel — and yes, it was a poor decision. I had so many bizarre dreams that night, it’s not even funny. It’s also been the source of many an instance of me waking up in the middle of the night and wacking my boyfriend across the face to make sure he’s not… well, you’ll see.

Fun fact: This one’s real. On November 22, 1987, Chicago television station WGN’s broadcast of The Nine O’Clock News suddenly cut out; what replaced it was someone wearing a Max Headroom mask, dancing oddly in front of a sheet of corrugated metal. Whoever was wearing the mask had managed to hijack the channel, maintaining control of it for 30 seconds before the engineers managed to fix the issue. And not only that, but it happened again later that night, too. This time it was WTTW’s 11 p.m. broadcast of Doctor Who — the Fourth Doctor story Horror of Fang Rock — that got hijacked; what replaced the good Doctor is what you see here.

And all these decades later? We still don’t know who did it.

A finalist in Popcorn Horror’s Blood Games competition in 2013, this short from director William Prince features nothing more than a handful of kids, an abandoned building, and a light switch. But that’s aaaaaaaaall it needs to work its nightmarish magic.

Do you believe in ghosts? Like, for real? If you do, you’re probably aware of something called EVP, or Electronic Voice Phenomena. The idea is that if you go into a haunted location with a sound recorder running, you might be able to hear something on playback you didn’t hear when you were recording. Now, it’s worth bearing in mind that the human brain likes to find patterns even where there aren’t any; it’s how we make sense of the world. As such, it’s possible that the words we hear in EVPs is just a result of our brains trying to arrange the noise into something recognizable.

That doesn’t stop them from sounding any less disturbing, though.

6. The Facts in the Case of Mister Hollow

You may already be familiar with numbers stations thanks to Lost or Welcome to Night Vale — but if this is your first introduction to them, I’m so sorry for the incredibly strange rabbit hole you’re probably about to fall down. We don’t really know what numbers stations are for, or who’s controlling them; all we know is that there are a huge number of shortwave radio stations out there broadcasting weird sounds and strings of numbers. We suspect they’re in code and probably related to spy activity… but that doesn’t make them any less weird. I’ve read the most about UVB-76, or “The Buzzer” — but the one seen (or more accurately, heard) here? Freaks me out far more. I think it’s the ice cream truck music combined with the little girl counting in German. Consider this one proof that what we don’t know is way creepier than what we do know.

8. The Dining Room or There is Nothing

Written and directed by Danish artist/filmmaker David B. Earle, this one-minute experimental short is intended to be played on a loop. I don’t know about you, but I couldn’t make myself watch it more than once. Inspired, writes Earle on his website, “by a personal paradoxical desire for empirical proof that there is nothing on the ‘other’ side of life,” it’s not creepy in the “BOO! SCARY MOVIE GHOST!” sense… but it’s still really friggin’ weird.

More like this
10 Pumpkin Recipes That Are Way More Creative Than Pie & Lattes
By Rebecca Deczynski and Alexis Morillo
Bennifer, Kravis, & 14 Other Fun Celeb Couples Halloween Costume Ideas
By Emma Carey and Brittany Leitner
6 'Game Of Thrones' Halloween Costumes That Aren't Overdone
By Nina Kahn
12 Easy Halloween Costumes You Can Wear With A Denim Jacket
By Kirsten Nunez and Bustle Editors
Get Even More From Bustle — Sign Up For The Newsletter