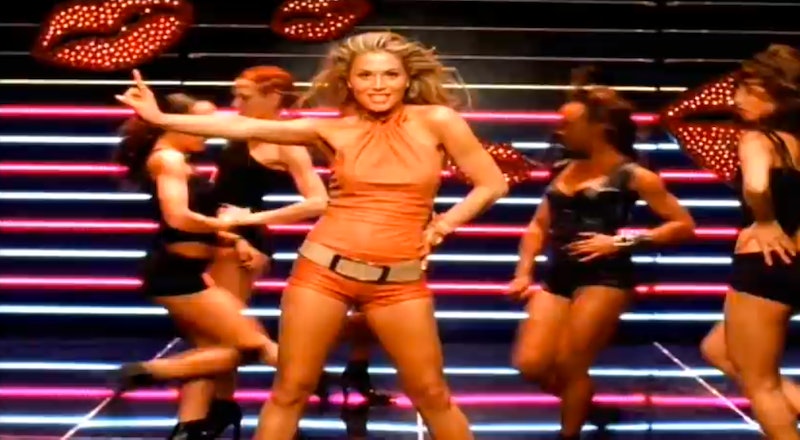 In 2001, singer Willa Ford released debut single "I Wanna Be Bad," a catchy and direct pop song that teetered on the edge of the Too Risqué For The Tween Set precipice. It was a smash: The "I Wanna Be Bad" music video was a TRL favorite and that summer, the song seemed to be playing on the radio more often than not. Since it dropped in '01, it's been used in several movies and commercials, including this incredible Six Flags ad campaign (heeeeey, Willa!). Alas, Ford was a one-hit wonder: "I Wanna Be Bad" would go on to be the only hit (sorry, "Did Ya Understand That") off of Willa Was Here.

At the top of the track, an Autotuned Ford lays it down: she wants to be bad. The protagonist of the song is attracted to someone who acts in such a way that makes misbehaving look "so good." She would like to hang up her rule-abiding hat and follow the object of her affection’s rebellious lead. She wants to be bad with him, gosh darnit! She's losing all her cool, dagnabbit!

On the flip side, the protagonist of the music video doesn't have to try to be bad; she is bad. She is a hot pant-wearing, enchanted lipstick-toting rebel without a cause. Whenever she plants a smooch on a man, he falls under her spell. She uses this power to commandeer a DJ booth at a club, steal two cars, and kidnap police officers. She raises hell at the club and on the streets. She's a criminal. A magic-wielding criminal.

It'd been a decade since I'd last watched this music video. My revisit left me with the following questions:

Where can I get these shoes?

Is riding a motorcycle in hot pants comfortable?

Am I the only person who genuinely thought for a good 30 seconds that this shirt defies physics/doesn't have a collar?

Why does she use her magic to request a song? I'm sure she could've just asked the DJ.

Does she steal a car because she's sick of riding a motorcycle in hot pants?

Can she control the power of her kiss? The DJ seemed to be just fine post-smooch, whereas the valet ended up on the ground.

Does this look mean she regrets stealing a car?

Or is she just upset that the cops won't share the donuts?

Hold up. Did the cops let her get out of the car and grab a donut?

I mean, they let her out of the car and they gave her a donut. Was Poison Ivying them really necessary?

Is that decorative belt made out of plastic?

Did Indiana Jones's hat and Rose DeWitt-Bukater's hat give birth to a baby hat?

Why would she leave the cop car's lights on? Eh, I guess "trying to lay low while driving a stolen cop car" isn't her steez.

What is this place?

Where is she taking the cops?

Let me get this straight: She looks at the guy driving the car in the next lane, imagines dancing in front of him in that creepy balloon room, and then drives away?

Did she injure herself?

No men were harmed, but what about Willa? That was quite a spill.

I may or may not be checking eBay for those light-up lip prints right now: