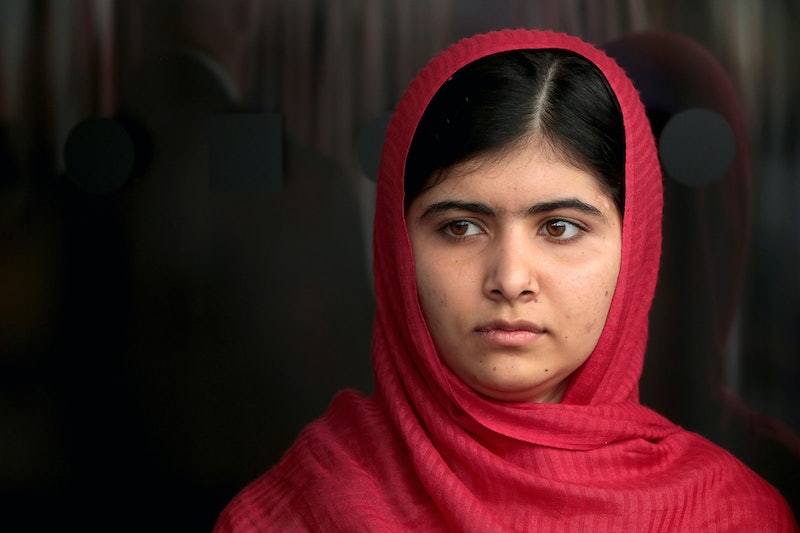 On Friday, the courageous teenage activist Malala Yousafzai won the Nobel Peace Prize, becoming the youngest person ever to be awarded the prize (before her, the youngest prizewinner was 32!). Winning alongside her was Kailash Satyarthi, a children’s rights activist from India, who's spent decades working to end child slavery. The two were awarded the prestigious prize "for their struggle against the suppression of children and young people and for the right of all children to education" — and yes, prepare to feel all the feels. “I want to tell children that they should stand up for their rights… Their voices should be heard,” the 17-year-old said in response to her win. (See more of her comments here.)

The Norwegian Nobel Committee had a big pool to choose from this year; they received 278 nominations, a record-high number, the names ranging from whistle-blower Edward Snowden to Pope Francis to Russian President Vladimir Putin (!). But while those nominated have no doubt also done many impressive things, Yousafzai and Satyarthi just stand out — especially as a combo. As the organization said in a statement Friday morning:

The Nobel Committee regards it as an important point for a Hindu and a Muslim, an Indian and a Pakistani, to join in a common struggle for education and against extremism.

If you haven't heard of Satyarthi before, here's his story: He's been working on ending child labor and slavery for over three decades now, giving up his job as an engineer back in 1980 in order to become an activist and found the Save the Childhood Movement. Thanks to his efforts, tens of thousands of child slaves have been freed and happily rehabilitated. But, as he told Sean McLain of the Wall Street Journal on Friday, there's more work to be done. He said:

I’m happy and I feel that this is a great honor for those hundreds of millions of children denied their fundamental right to childhood, education, and opportunity. I hope that the world will pay more attention to child labor and slavery in the world and I hope I will get broader support from Indian and world governments. A big responsibility now falls on my shoulders. I promise to take it up with more inner strength and I will devote my life to ending child slavery. I’m sure it will end in my lifetime.

You're likely familiar with Yousafzai , though. In 2012, the then-15-year-old Yousafzai became a Taliban target for her work advocating girls' right to education. In October of that year, she was shot in the head while boarding her school bus in Pakistan’s northwestern Swat valley — she survived, and became more determined than ever to continue with her mission. (I don't know about you, but between the ages of 15 and 17, my life was Gilmore Girls, finding out how to eat all the carbs in the world without gaining weight, and, er, "writing my novel." Yousafzai 's impressive 17-year-old self stands in sharp contrast to this picture.)

Since recovering from her gunshot wounds, she's given powerful speeches to the U.N., created the Malala Fund (an organization which to helps to empower girls everywhere), won the EU human rights prize, and traveled to Nigeria to demand the release of the girls kidnapped by Boko Haram. In fact, she's been so publicly impressive for so long that many had thought she'd win the Nobel Prize last year (instead, the prize went to the Organization for the Prohibition of Chemical Weapons, which had been given the task of dismantling Syria's chemical weapons arsenal). When she lost, it was presumed that it was due to her young age — clearly, the judges couldn't let themselves be held back by that anymore.

Both Yousafzai and Satyarthi will share the 8 million Swedish kronor award (roughly equivalent to about $1.1 million), but the recognition they get is each their own.