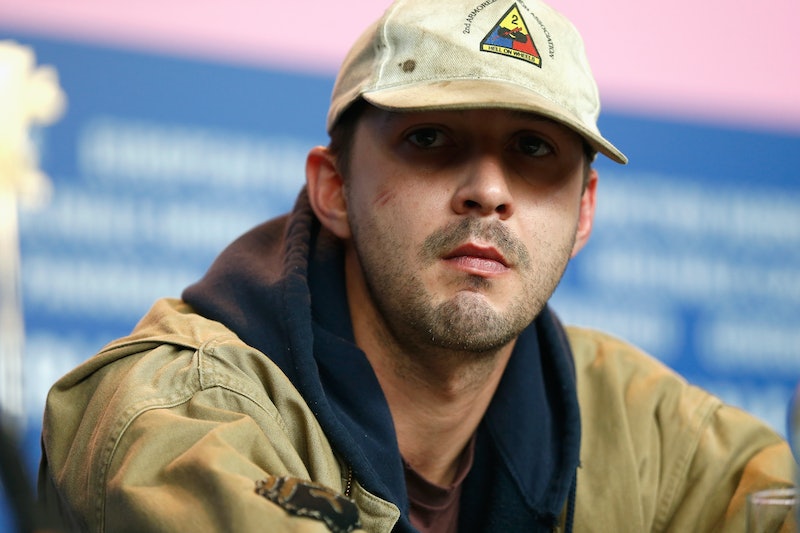 Shia Labeouf has mostly stayed off the radar since his most recent legal trouble in 2014. For those who have forgotten in the wake of everything else that has happened in the celebrity world, LaBeouf was arrested for trespassing and disorderly conduct during a Cabaret show in June 2014. Since then, he's been relaxing and keeping the attention off of him and onto his upcoming film with Logan Lerman and Brad Pitt, Fury. However, in his appearance on The Ellen Show on Friday, he opened up about his recent issues. LaBeouf's apology for his past misbehavior came across as very humble and a little inspiring, at least in the sense of his own personal growth.

Ellen DeGeneres opened the conversation by confessing that she didn't really keep atop of her celebrity news and thus asked LaBeouf to describe his experiences in his own words. "Man, I went through like an existential crisis, which turned into... explorations," he said. "I had some hiccups, some judgment errors." Not exactly a good start to an apologetic speech. After all, there's a difference between "some judgment errors" and spitting at the police officers who are arresting you at a Broadway show. But, thankfully, he didn't stop there.

In tracing his history, from the debut of his I'M NOT FAMOUS ANYMORE paper bag to his performance art show where he invited people to meet with him one by one, LaBeouf came across as a reflective man who is growing and still trying to grow. He explained his actions as they made sense to him at the time, but he didn't excuse them. He especially didn't excuse his actions on the night of his arrest, even sending a message out that police officer that he spit on: "I'm sorry if you're watching, dude. I'm sorry. That was crazy, man."

Was it a perfect apology that excuses all of the wild antics that LaBeouf has pulled up to this point? No. Does it give us all some perspective on those antics and some insights into who he is and why he felt the need to do those things? Yes. This Ellen appearance might not inspire you to call LaBeouf your favorite actor again, but it's nice to see that he can acknowledge when he's done wrong and not let it affect the press for Fury. It's nice to see that when it comes right down to it, LaBeouf can do his job with maturity and strength of character. Above all, it's nice to see that he's doing all right and trying to grow as a person. That's all we can really ask for at this point.

Check out his interview below.