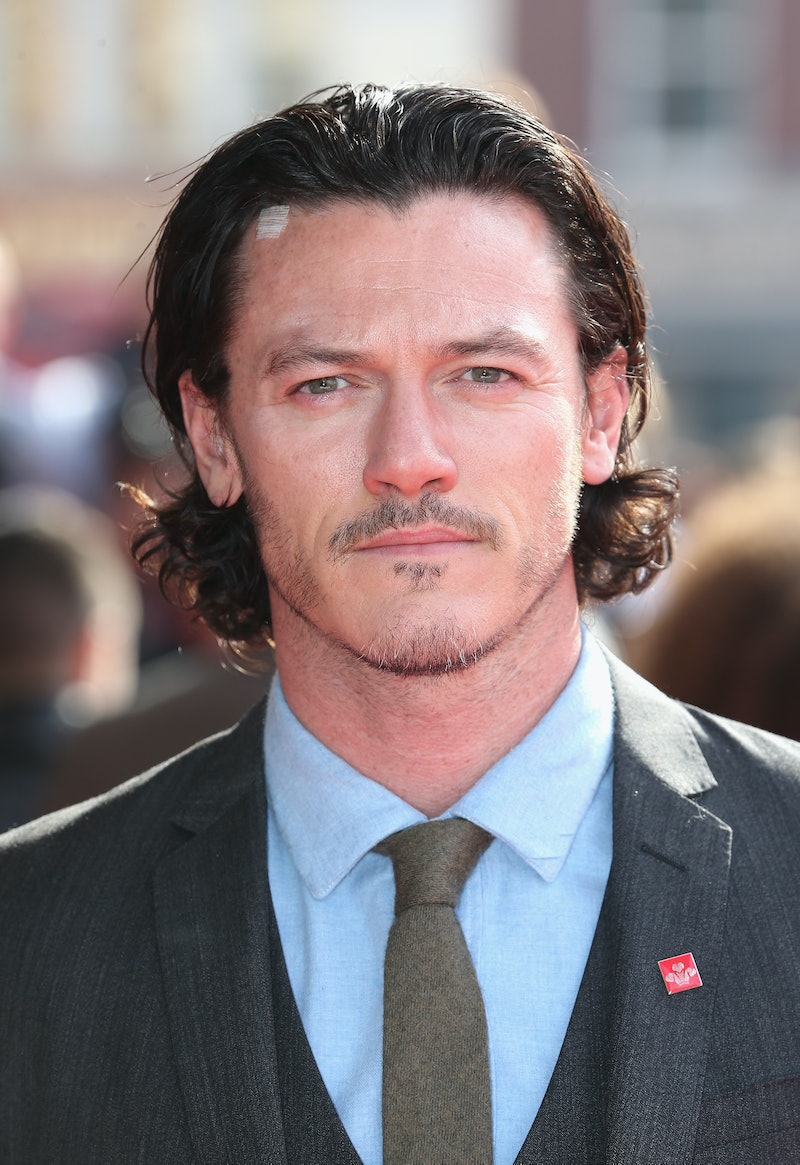 It's that time again, everyone. Time to plunge into the depths of the Internet to investigate the romantic lives of our public figures, while we simultaneously eat cheese with Real Housewives of New Jersey blaring in the background. Today, I'm turning my lens on Luke Evans, the chiseled-jaw toting leading man from Dracula Untold which premieres Friday, Oct. 10. Who is Luke Evans dating? Let's play Google stalk, shall we?

This ruggedly masculine Welsh dreamboat boasts credits on The Hobbit: The Desolation of Smaug, Fast and Furious 6, and now Dracula Untold. His romantic past is, well, a long story. For years, he was openly gay and spoke freely about being so. In an interview with The Advocate in the early 2000s, Evans discussed being truthful with the world about his sexuality: "If that means I'm going to be a poor man at 60, then at least I've lived a happy, open, gay life and not had to hide it from anybody." Later on though, he began dating women.

In 2010, Evans was seen out with British marketing professional Holly Goodchild. No word for sure on how the two met, but Goodchild mentioned that they were "old friends and it just sort of happened." OK, so this relationship was with a publicist, which will naturally raise a few eyebrows; however, some friendships can be so close that platonic feelings turn romantic for a while.

If Evans doesn't want to label his sexuality, that's A-OK. The real thing to find out here is, are Evans and Goodchild still happening?

After checking out both of their Twitter accounts, it seems like Goodchild and Evans haven't been hanging out lately. Incidentally, Evans has been seen out and about with model Jon Kortajarena throughout 2014. The Spanish model accompanied Evans to the Amfar gala in May, and they even went to the Louis Vuitton Spring/Summer 2015 fashion show together in June. There's been speculation that the pair is a couple, but we can't confirm anything for sure beyond the fact that they seem to be close friends.

Poised to be one of Hollywood's newest leading men, Luke's schedule is a bit busy for dating after all. Between meeting Muppet icons...

And attending premieres, who has the time for a significant other?

In conclusion, there's a possibility that Evans is spoken for. However, nothing is entirely certain. What we can tell for sure is that Evans has great taste in cats.