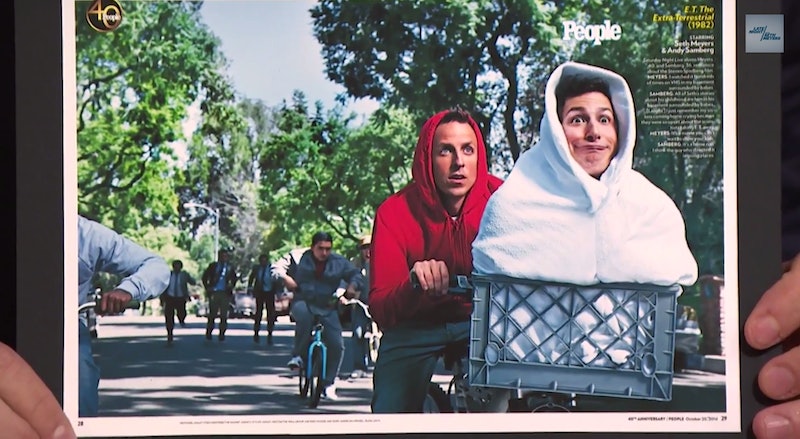 Let's take some time to look at some happy stuff, shall we? With all the sad, terrible news going on in the world these past few months, I think we all need a little pick-me-up. And, thankfully, Seth Meyers has us covered: In a new photo shoot for People Magazine, Seth Meyers and Andy Samberg flawlessly recreated a pivotal scene from 1982's E.T. The Extra-Terrestrial , with Meyers playing Elliott and Samberg, of course, playing E.T. in the best way possible. I mean, just look at that still up above and tell me it's not the best thing you've seen today.

Meyers debuted the photo on Late Night with Seth Meyers , explaining that he and Samberg were approached by the magazine to recreate a scene from Butch Cassidy and the Sundance Kid, but they said no in favor of doing an E.T.-inspired photo shoot instead. And it's a good thing they did, because the duo are basically perfect. Samberg is pulling off E.T. face perfectly, and Meyers looks — well, a bit older than Elliott, but it's OK because we know they have like a 30-year age difference.

And People's amazing behind-the-scenes look at the photo shoot, featuring Samberg doing the best E.T. voice since — well, E.T. itself.

I totally see it.