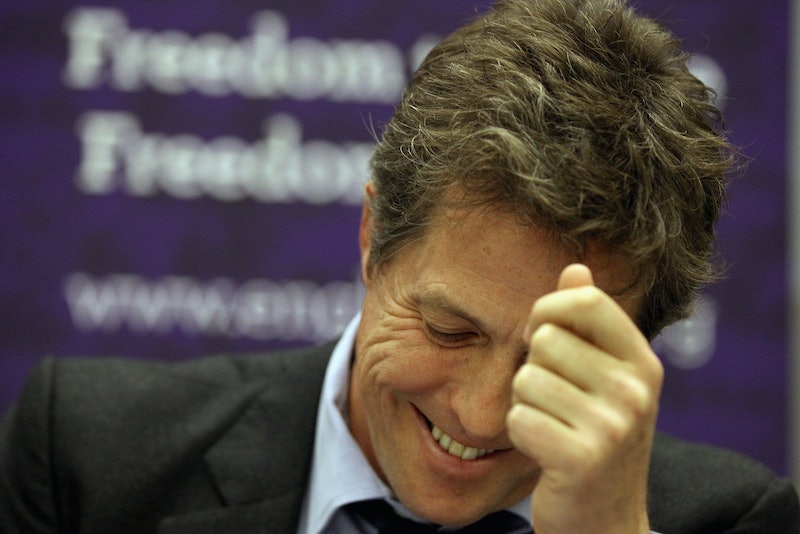 Make sure to grab a box of tissues and a Pumpkin Spice Latté before reading this post, because you’re going to need something sweet to drown your sorrows in after hearing this latest news: According to reports, Hugh Grant has dropped out of Bridget Jones's Diary 3.

I repeat: Daniel Cleaver has dropped out of Bridget Jones's Diary 3. This is by far the worst way to start off any day, so please accept my apologies.

Though Grant has taken part in the first two installments of Bridget Jones’s Diary, acting as one of Bridget’s (Renee Zellweger) main love interests in her love triangle with Daniel and Mark Darcy (Colin Firth), he told Free Radio on Friday that he has officially left the film. If there were an equally annoying-yet-emphatic way to express the opposite of “YAAAASSS,” then now would be the best time to use it.

In his interview with Free Radio, Grant didn’t clearly detail why he decided to leave, but it seems implied that he may have had an issue with the creative changes that were later made to the movie.

“I decided not to do it,” Grant said. “But I think they’re going to go ahead and do it without Daniel. The book’s excellent, by the way, but the script is completely different — well, the script as I last saw it a few years ago.”

I can respect the English actor for wanting to stay true to the original story, but I don’t know how I’m going to pull through without Daniel’s fantastic lines and clever humor. I think it’s probably every woman’s dream to have two hunky men (British, especially!) doting over them like Daniel and Mark did over Bridget, so Grant’s presence will most definitely be missed.

Plus, there’s nothing better than a good fight scene between the two as we saw in the first and second movies. It’s basically like seeing two puppies trying to wrestle with each other.

However, the third film, based on the book Bridget Jones: Mad About the Boy, is meant to be focused on Bridget’s strong desire for a baby anyway, so I’m not quite sure how Grant’s character would’ve played a part in that since she (spoiler alert) ended up with Mark. On the upside, Zellweger is an Oscar winner and received tons of acclaim for her role in the Bridget Jones’s Diary franchise — and Firth too has received his own Academy Award (and, not to mention, is a phenomenal actor), so the film will probably be great even without Grant.