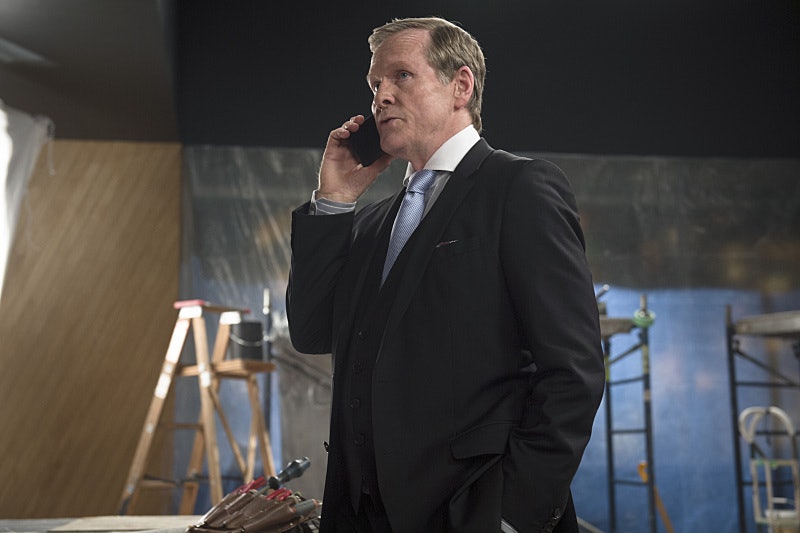 As The Flash continues to dominate TV, we're going to start seeing more more familiar faces from the comics pop up. One of these will be Simon Stagg, the CEO of Stagg Industries. Played by Roswell vet, William Sadler, he'll make his first appearance in Tuesday night's episode of The Flash, " Fastest Man Alive." Will he be around for only one episode? Will he stick around for more? Stagg's a recurring figure in the DC comics, so this probably won't be the first time we see him. But his company's already been mentioned on Arrow before, so what is he doing hanging around Central City?

Stagg isn't so much of a "bad guy" as he is an over protective father for his daughter, Sapphire, who manages to fall in love with Rex Mason, who then becomes Metamorpho (got all that?). He's simply doing what any father does best, which is look out for his children, no matter what length he has to go to (he's at fault for causing Rex to turn into Metamorpho because he sent him to Egypt, but let's not go there). He's also a pretty low-key guy, and only pops up in the comics from time to time. He runs into Black Canary at one point while he's looking for his daughter (one again, the over protective father). He mostly only shows up when there's something directly related to science happening — because it all comes back to Stagg Industries.

Maybe even bigger than the man himself, Stagg Industries is responsible for research in engineering, chemistry, and genetics. Back when Arrow's Laurel was working for CRNI, she mentions that Stagg Institutes was one of the non-profit's biggest contributors. However, they pulled their funding as CRNI slowly began to collapse — until Tommy stepped in to help.

So what kind of impact will Stagg have on The Flash? Sadler has been posting pictures to his Twitter of his time on the Flash set. From squinting at the picture for a very long time, I think I can make out the fact that Central City University is giving Simon Staggs a prestigious award.

And both Barry and Iris attend the event.

Stagg is a brilliant guy, and it would make sense for him and Barry to connect at this event, Also, just like with CNRI, Stagg Industries is also a know supporter of S.T.A.R Labs. Hey, isn't that where Harrison Wells has his secret lair? This might be a new turning point for the character, as he could become a huge benefactor for whatever happens next to Barry.