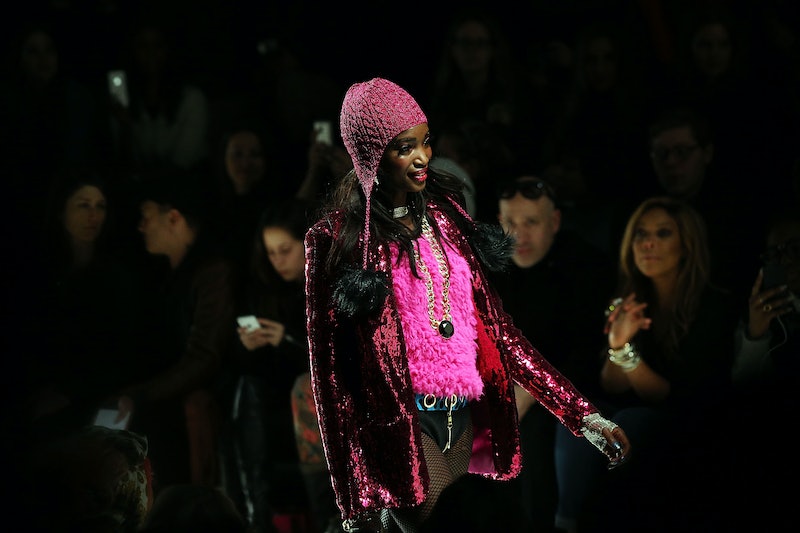 Balance Diversity, the website of the Diversity Coalition led by Bethann Hardison, posted an update in February that "there was a marked improvement on the runways" from the previous Fashion Week season, when the Coalition called out the international fashion industry on its lack of diversity. The update also notes that, although there was improvement, there needs to be consistency marked by a wider representation of models of color on the runway. However, just one season later, the latest report on this month's fashion weeks shows a consistency not necessarily lending to more models of color.

On Tuesday, The Fashion Spot released its report, which analyzed 151 fashion shows in New York, Paris, London and Milan. And, the only thing remaining consistent was the approximately 80 percent of white models who have continued to dominate the runways for the past three seasons. In February, Jezebel's report on New York Fashion Week's Fall/Winter 2014 shows revealed that 78.69 percent of models were white. For Spring/Summer 2014 show's, the website reported 79.98 percent of white models walked the NYFW runways.

In June, Naomi Campbell, full of emotion and tears, presented Hardison with the Eleanor Lambert Founder's Award at the CFDA Fashion Awards. Before welcoming her to the stage, Campbell spoke on Hardison's vigilance for models of color in the fashion industry. "This isn't a fight. This is a conversation. It's about making people in the industry aware in a civil way," Campbell said to a room full of fashion's most noted players. The conversation that Campbell speaks of is present. Although there hasn't been much improvement on the runways, there has been an unwavering critical eye on the fashion industry's misrepresentation and appropriation of people of color. Jezebel's article this week criticized the "less is more" beauty trends that are subliminally sending messages of whiteness in the fashion industry. Refinery29 recently unpacked the problem with white women wearing cornrows. Last month VOGUE caught a lot of flack for its booty article. The inappropriately named Chanel urban tie cap, although the subject of jokes aplenty, was heavily criticized on Twitter. There is an underscoring vigilance; however, amidst the noise, the runways remain reflective of just how far diversity in the fashion industry has to go.

There remains a haunting history of prejudices that follows models of color–specifically black models– even those most visible, such as Joan Smalls, Chanel Iman, Malaika Firth, and others. That history, albeit a lengthy one, can be summarized in the irony of Hardison receiving an award named after Eleanor Lambert, one of the most domineering fashion authorities of her time. She discovered Bethann Hardison when black women were making their claim to fame in the fashion industry. Hardison stood among countless models of color during her time, such as Naomi Sims (the first black woman to appear on the cover of Ladies' Home Journal), Beverly Johnson (the first black model to appear on the cover of VOGUE), and Donyale Luna (in 1963 she became the first black woman to appear on any major fashion publication on the cover of Harper's Bazaar). The irony, however, is Lambert's perception of black models during her trailblazing years. In 1969, she told TIME Magazine that black models were "the look of now," going on to describe the attributes that made her the "in" thing to use. Naomi Sims once stated that she knew it was "in" to use her right now. In 1970, Ebony magazine, a publication specifically for black women, stated that black was a "fad." A white fashion photographer was quoted in the same TIME's article as Lambert stating that black models photograph better on white backgrounds.

What we see on the runways is nothing new than say, cornrows, the booty or even whiteness, for that matter. The problem concerning models of color is historically rooted and replicated in the use of their skin color as a trend that's most convenient for, as Lambert put it in 1969, right now. As vigilance continues for consistency in diversity, perhaps another layer to the conversation is the commodification of skin color for mere convenience; a conversation, like diversity, the industry is most likely not ready to have.