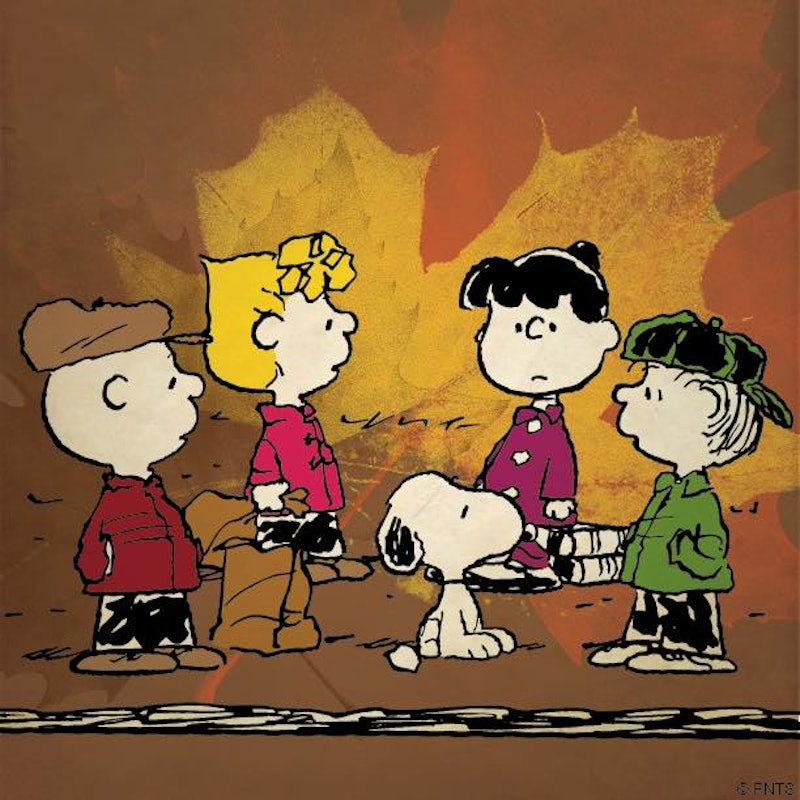 It's finally fall and you know what that means: It's the season for cooler temperatures, pumpkin spice-flavored everything, new TV shows, and holiday specials — especially ones featuring Charlie Brown. The kid star of Charles M. Schulz's Peanuts toon gang has actually led numerous TV animated specials over the years — including the lesser known It's Arbor Day, Charlie Brown and You're Not Elected, Charlie Brown — but the ones that annually air on ABC during the holidays are can't-miss perennial favorites. Charlie Brown season officially begins when It's the Great Pumpkin, Charlie Brown airs Oct. 15 on ABC at 8:30 p.m. It's also available for purchase on iTunes and Amazon Instant Video.

The 1966 classic follows Charlie Brown, his dog Snoopy, and the rest of the comic strip gang as they celebrate Halloween in their own ways — Chuck gets invited to a big party, Snoopy channels World War I, and Linus Van Pelt loyally awaits the Great Pumpkin in a pumpkin patch. What is the Great Pumpkin? Not much is known about the Halloween-inspired figure, other than what we know from the blanket-loving Linus — you can write letters to him, he's supposed to show up on Halloween, and no one else believes in him. "There are three things I have learned never to discuss with people: religion, politics, and the Great Pumpkin," he famously says in a 1961 Peanuts comic strip.

Spoiler alert: Despite Linus' waiting, the Great Pumpkin never seems to show, but that doesn't shake Linus' faith in his existence. He must've seen this person or thing at least one Halloween. So what could it have been? Here are some guesses as to who or what could be behind Linus' pre-PSL pumpkin obsession.

A Prank By His Sister, Lucy

Here's the thing about Lucy Van Pelt: She loves to mess with people, especially her younger brother Linus. It's totally possible that during one Halloween, she spotted Linus playing around in the pumpkin patch and decided to prank him via one of the huge pumpkins in there. But she probably didn't think her prank would inspire such unwavering devotion. Whoops.

An Adult in a Pumpkin Costume

It's entirely possible that perhaps Linus got lost in the pumpkin patch one year and ran into an adult wearing a giant pumpkin costume. This adult, who I hope was a sober person with good intentions, saw Linus wandering alone and decided to escort him back to his trick-or-treating group. The curious little boy, of course, asked the pumpkin who he was and, not wanting to break the fantasy of All Hallow's Eve, the adult told Linus he was the Great Pumpkin. The non-creepy adult also gave him some extra (non-poisonous) candy. Thus, the legend was born.

Or the legend was all in Linus' head. During a night of trick-or-treating, Linus just couldn't help himself and binged on all the candy he collected. Ashamed at his lack of self-control, he and his blanket hid out in the pumpkin patch all night next to a giant pumpkin and, in his very hyper state, began bonding with it by having an imaginary conversation. Then he and his blanky crashed by the pumpkin, but by the time Linus woke up, the giant pumpkin was gone.

No matter who or what the Great Pumpkin is, Linus will be waiting.