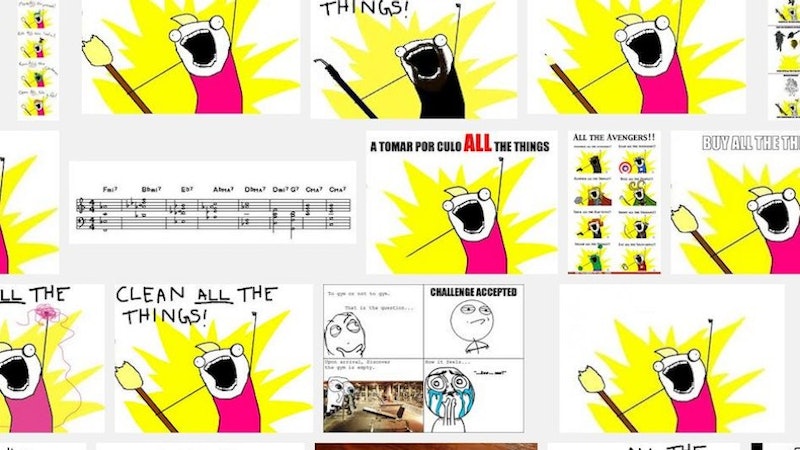 “You can thank Girls for that trend,” replied writer Amanda Chatel. “She wants all the things. UGH.”

Now, I enjoy blaming Lena Dunham for UGH-worthy things as much as the next youngish person. But I thought Chatel was reaching in this case. I had an idea where the “all the” trend came from, and Girls wasn’t it. Like any intrepid reporter would, I consulted with my friends over beers.

“Where does that come from?” I pressed them. They did not know. “Talk to Patrick,” one of them offered. “I think I remember him having an explanation.”

So I asked Patrick, who did, indeed, have an explanation. It involves the Halo video games.

“There's a scene where some of the characters meet projections of themselves. One of them is projected as a childlike glutton of sorts. One of his more memorable lines is when he says out of the blue 'Do you have any food? I want to eat ALL the food.' It passes kinda quickly, but it's got that cadence and blind enthusiasm the meme has come to be notable for. I'd place it in the mid 2000s (2004 I think).”

I applaud Patrick’s memory, but it seemed unlikely that a video game line from 2004 would suddenly resurface as an Internet meme in 2013. Of course, it seems nearly as unlikely that a line from a 2010 web comic would.

I am referring to Hyperbole and a Half, a blog kept by graphic storyteller Allie Brosh. On it, she manages to make her struggles with depression and adulthood both poignant and LOL funny.

In a June 2010 post (“This Is Why I’ll Never Be An Adult”), Brosh’s illustrated alter-ego vows to "go to the motherf*ing bank like an adult" and “Clean all the things!" It’s hard to do the post justice by summarizing, so you should probably go read or re-read it.

Since that time, one of my best friends has been consistently doing/eating/thinking “all the things.” And, occasionally, I’d see the phrase crop up in blog post titles or friends’ tweets. I didn’t much notice it being ubiquitous Internet lingo until, quite suddenly, it was.

I always assumed the root to be Hyperbole and a Half, but after hearing it attributed to Girls and Halo, I began to wonder if I was wrong. I started asking more people — bloggers and Internet freaks and other sorts up on their meme origins. The overwhelming majority confirmed my assumption: We can trace this meme back to Brosh.

Of course, by the time a meme becomes a meme, where it came from is more or less moot. But Brosh is hilarious, her blog was delightful and she has a book coming out soon. I thought it only proper to try and give attribution where attribution is due.

Explain all the things! (Sorry Candace.)

Image: Screenshot, Google Image search for "all the things"