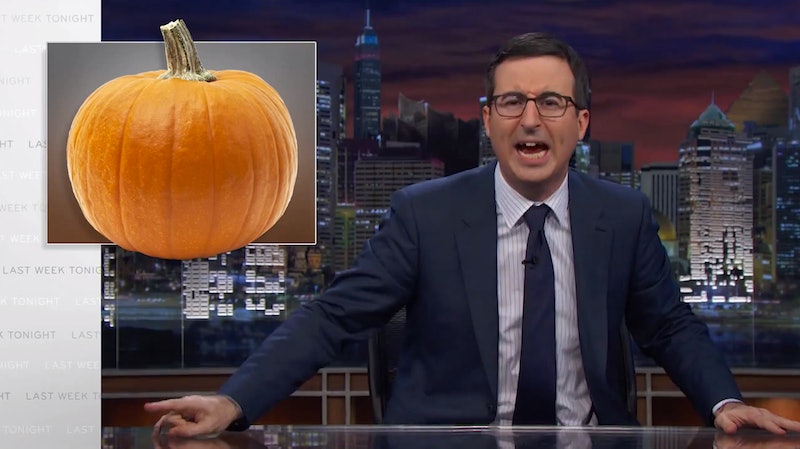 Like flip-flops are to summer, and pointy ears are to Comic-Con, pumpkin spice has become the official symbol of fall. Come September, suddenly everything is pumpkin-scented — candles, fragrances, random babies you pass by. And then there's that ubiquitous drink — you know the one. The second you feel that first cool breeze, a Starbucks Pumpkin Spice Latte magically appears in your hand. But why? On Sunday's episode of Last Week Tonight, our favorite sleuth, John Oliver, investigated all things pumpkin, pointing out that Americans seem to blindly jump on the pumpkin wagon every autumn for reasons unclear.

I mean, nobody is knocking the good old pumpkin. As far as history can tell, it's never done anyone harm. But what is the strange psychological phenomenon that occurs every autumn that drives people out to Starbucks in droves like the chain's giving out free health care? Actually, that would probably have a milder effect. Whatever it is, John Oliver has had enough. Anytime the general population collectively gets that excited over something, you know that the toppling of civilization is right around the corner. As Oliver firmly says, "I will be subject to its tyranny no longer! It stops here!"

Luckily for America, if our people are indeed subconsciously participating in the largest cult in our history, one whose origins have not been proven — how do we know Putin's not involved? We don't! — then Oliver is here to open a full investigation. And maybe start a war. Take a look at his probing questions and insightful comments. Ever the wise one, that J.O.

Oliver points out that the pumpkin trend is seen most in the sudden change of our coffee routines, which happens like clockwork once fall rolls around.

It's the middle of October, which across the nation means that we're all looking at this [points to a picture of a pumpkin] and thinking, "I don't know why, but I simply have to drink that. Yes, it's that special time of year where we voluntarily imbibe pumpkin spice lattes, the coffee that tastes like a candle.

No, But Really — Did Yankee Candle Invent This Stuff?

Pumpkin Spice Is a Total Poser

What's really infuriating about all this is that pumpkin spice has just been fronting this whole time.

But what is strange is that pumpkin-spiced foods, inexplicably, seem to grow more omnipresent every year, even though there's no actual pumpkin in the drinks. Kind of like how everyone you meet calls himself a DJ all of a sudden, when what they really mean is they own an iPad and has been to a party.

Yet, Somehow, Americans Eat a Ton of It Every Year

Oliver shares some alarming statistics: Americans eat over five pounds of pumpkin per person every year. What?!

Which is more than the amount of pumpkin in five pumpkin pies.

It's not even that good.

Pumpkin pie is the most seasonal food there is. It is only good from the moment Thanksgiving dinner ends until just after you've taken your first bite of it.

And the fact that we somehow consume that much of it on average is unimaginable. Oliver compares it to the spider theory, but at least that one makes sense because we're unconscious when it happens. How and when did all that pumpkin get inside of us?

Five pounds of pumpkin a year is even crazier than the fact that we allegedly swallow eight spiders in a lifetime. Why is it crazier? Because there is no way a pumpkin has ever crawled into my mouth while I was sleeping.

It's All the Rage and Then It's Forgotten, Like The Jersey Shore

Why don't people ever crave pumpkin in the spring? What would happen if you brought pumpkin pie to a Memorial Day BBQ? These are the kinds of questions we should be asking ourselves.

And the worst part is nobody wants anything pumpkin-flavored from December through August. And here's how I know that: you can have it whenever you want! That bottle of pumpkin-flavored science goo sits behind the counter of Starbucks all year round. Never aging. Like Ryan Seacrest, or the early work of Dr. Dre.

According to Oliver, it just has that intangible fallness to it. And that's why it's so popular.

The point is, we tolerate pumpkin spice because we like the fall. It's the best season because you get to stop thinking about how weird your legs look in shorts — that's everyone, right? We all agree on that?

Why not drink hay soda instead? Or some of Oliver's suggested latte alternatives.

But just about anything that reminds us of autumn is a better flavor than pumpkin spice. I personally, for instance, would rather drink a cable-knit-sweater-spice latte, or a Major-League-Baseball-spiced latte, or a keen-awareness-of-my-own-mortality-spiced latte because that's what foliage is.

More like this
16 Trader Joe's Appetizers That Are Total Party-Pleasers
By Kaitlyn Wylde
Learning To Love, Not Judge, The Lunchbox Wives Of TikTok
By Esther Zuckerman
The 3 Best Chamber Vacuum Sealers
By Vanessa Spilios
Do Green Powders Work As Well As TikTok Says They Do?
By Carolyn Steber
Get Even More From Bustle — Sign Up For The Newsletter
From hair trends to relationship advice, our daily newsletter has everything you need to sound like a person who’s on TikTok, even if you aren’t.