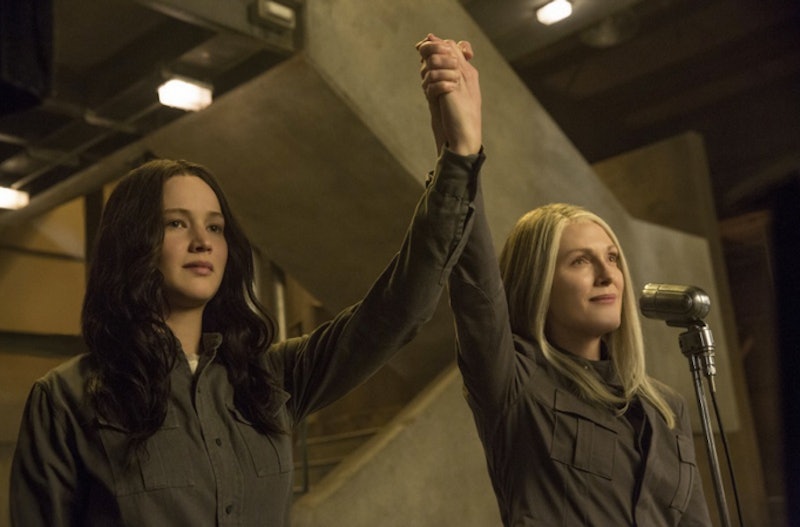 I gotta be honest, I'm all for a big chop pixie debut, but when Jennifer Lawrence cut off all her hair before Mockingjay's filming, a dank dread seeped into me. We were doomed, in that moment, for wigs to play a co-starring role in the remaining Hunger Games movies. Now it's become my duty, before Mockingjay , Part 1 actually hits theaters, to get this wig situation out of my system. And so with every new image, I must ask: How's the wig doing? Is it all right? Will it devour this entire film, becoming a breakout role that nobody asked for?

Let us never forget Twilight: Eclipse. Let us never forget what took over Kristen Stewart's head in that movie. We must let it guide us through these next steps, a cautionary tale. So how is the new wig in our cinematic lives faring in the Mockingjay stills?

Eh, it's kinda alright. It's not perfect; it's a little lifeless, a la Karen Gillan's hair situation in Selfie . And yet, it's not as horrific as it could be. High praise? The question remains: How will this wig hold up in battle? Katniss is the center of a literal war in the Mockingjay films; will her revolutionary antics be overshadowed by a limp yet strangely motionless interloper? Will Lawrence's wig be the Ben Affleck penis to Mockingjay's Gone Girl ?

Only time and seeing this thing in motion will tell, I suppose.

It's also important to acknowledge that these new stills include more Natalie Dormer as Cressida, which is always welcome and always craved:

And some Star Wars.