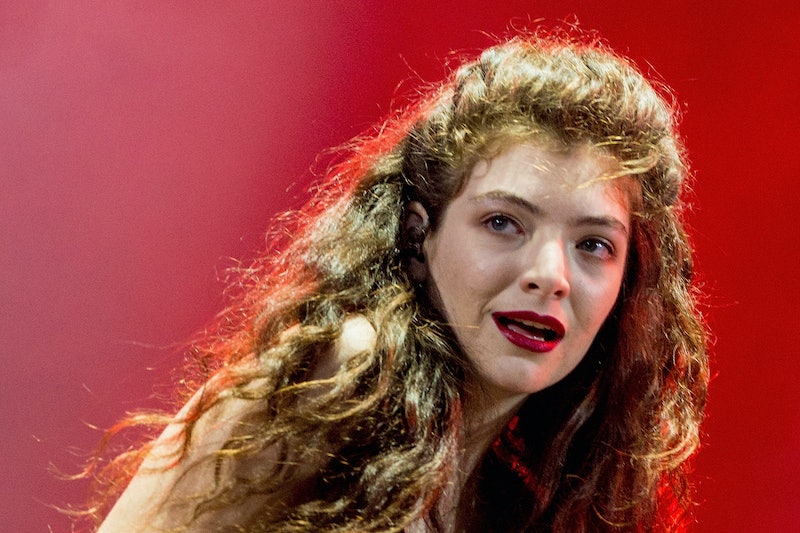 In the last week two weeks, South Park revealed what we've all long speculated, that Lorde is, in fact, middle-aged dad Randy Marsh in disguise, and the whole thing has snowballed into a circus. SPIN Magazine expressed concern that the down-to-earth teenager was being mocked, and creators Matt Stone and Trey Parker responded with an entire episode that ripped them apart and had Marsh masquerading in black fishnets. However, it was Lorde's reaction to her South Park cameo that was perfect, proclaiming on her Instagram that her cameo was surprisingly cute. The internet has been subsequently blessed with her rendition of the Randy-Marsh-as-Lorde-hit, "I Am Lorde, Ya Ya Ya."

While there's no confirmation if a cover of "Push" aka "Feelin' Good on a Wednesday" is in the works, it's clear that Lorde has reacted to her appearance not only better than most 17-year-old goth kids would handle anything, but better than most celebrities have handled their own cameos. Don't believe me? Here's a spectrum of how other celebs handled their South Park "cameos."

If there's two things he loves it's fighting, and fighting 'round the world! Crowe shows up as a side joke starring in his own TV show, "Russell Crowe: Fighting Around the World," in which he — you guessed it —picks fights with random passersby and proves to be so insufferable his steamboat Tugger kills itself. But did the real life Crowe raise fisticuffs to Stone and Parker?

Not quite. On an episode of 60 Minutes Crowe, totally pokerfaced, calmly remarked, "I think they are very, very funny men, and I wish them godspeed, and I hope they continue to do what they’re doing.” You can feel the rage bubbling, though, can't you?

West headed down to South Park a few times, once wrestling with his identity of a gay fish, and more recently educating the children on why Kim Kardashian is not a hobbit (despite that whole slaying a dragon thing).

West was remarkably good natured about his first cameo. In an all-caps blog post he acknowledged that "SOUTH PARK MURDERED ME LAST NIGHT AND IT WAS PRETTY FUNNY" and that "I GOT A LONG ROAD AHEAD OF ME TO MAKE PEOPLE BELIEVE I'M NOT ACTUALLY A HUGE DOUCHE BUT I'M UP FOR THE CHALLENGE." That shows a tremendous amount of growth on West's part, even though I feel as if he's screaming at me.

If anyone was going to jazz up the grand queefing revolution, it was definitely going to be Stewart, or at least South Park's version of her. But what about the real life Stewart? In a Reddit AMA, Stewart commented that she "thought it was cute!" Definitely a classy move.

Saget makes a quick cameo in the Season 1 finale, "Cartman's Mom is a Dirty Slut." In said episode, his jokes fall flat, appealing to Stan's delusional grandpa alone. In reality, Saget showed that he wasn't devoid of humor, stating that in his own Reddit AMA that, "I liked that their grandfather found their version of me so hilarious while he watched me on that video show. It hurt and felt good at the same time. Like most of my relationships."

Hilton was on the receiving end of one the most brutal South Park slams in history in the episode "Stupid Spoiled Whore Video Playset." In an interview for blackfilm.com, she declared, "I haven't seen it, but when people copy you, that's like the most flattering thing, so whatever people can say, I just laugh about it. It doesn't matter to me." Well. It's a good attitude to have, and probably for the best that she didn't see the "Whore Off" between her and Mr. Slave.

In what will one day go down as legend or myth, Tom Cruise, reacted badly to his time on South Park. Allegedly, Cruise threatened to cancel his publicity tour for Mission Impossible III if Comedy Central chose to rebroadcast the episode, which set off a whole debate about freedom of speech. Whether this is true or not, and Cruise has since commented he doesn't want to dignify the subject, what's certain is that Stone and Parker ended up on top.

When she's not partying with the witches on American Horror Story: Coven, Nicks has been known to moonlight as a goat on South Park. They also used "Landside" as a frame to showcase Stan's life had turned to crap. Both statements feel so right.

When asked, Nicks stated she hadn't seen that episode but that Stone and Parker asked her and she approved. She also added, "You know, I like South Park, and I like the two guys that do it. I think they're really funny and I think that they're relevant."

For the most part, Stone and Parker don't dislike any celebrities personally, they just dislike the idea of celebrities, but one woman remains the exception to that: Barbra Streisand. Their Streisand-loathing manifests itself several times in the course of the series, but particularly in the season one episode "Mecha-Streisand." The rest is history.

Streisand had a diva-worthy reaction to it, claiming, "I wonder if shows like South Park and Beavis and Butthead don't add to the cynicism and negativity in our culture, especially in children. These youngsters are formulating their attitudes and maybe they come away feeling that any woman who dares to accomplish something is the incarnation of self-centeredness and greed. And that would be very unfortunate, especially for young girls."

Fair. At the same time, there's nothing more magical than watching Barbara Streisand fight Robert Smith of The Cure. And that said...

Robert Smith, the greatest person who ever lived, actually voiced himself for his South Park cameo. He later told SPIN Magazine that his nieces and nephews were big fans of the show, and "of all the things I’ve done, all the people I’ve met, it all counts for nothing compared to being on South Park.”