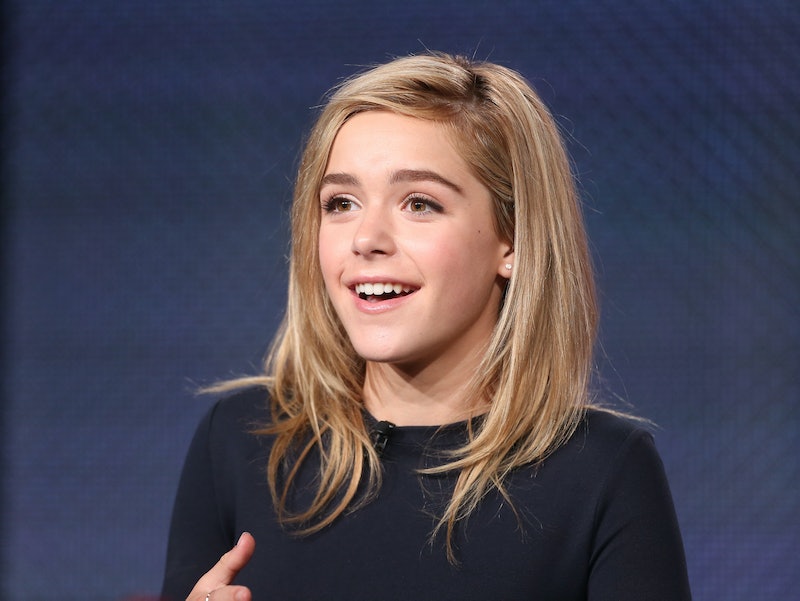 Who run the world? Apparently it's teenage girls, which makes me feel ancient. But enough about me! Time named the 25 most influential movers and shakers under 20 on Monday, a formidable 20 of which are impressive young women (some of them are grouped together, like Sasha and Malia Obama). It is awesome to see such young women that are so strong and outspoken, and to know that they are great role models for young women and girls—and even older women, like myself!—who may hesitate to follow their ambition, or be afraid to face their fears. The list includes musicians, actors, and even Nobel Peace Prize winners. They're an outstanding bunch, and besides being generally awe-inspiring before they can even vote, they have redefined what it means to be a teenager: yes, it is a time of growth and youth, but that doesn't mean it can't be a time to totally kick ass.

What better way to celebrate these powerful young women than by taking a look at some of their powerful words? Each of these young women displays impressive courage, confidence and strength, all while being true to themselves. They’ll make you want to be better yourself.

On being a role model: "I never thought that I would be a role model at this age. It was kind of shocking to me when I first came down to watch a game. There was a crowd of people. I was kind of nervous but I was, like, excited for it. So I just have to be myself.”

On maintaining normalcy in a very un-normal environment (from their mom, Michelle): "They really want normalcy and the White House isn’t normal, so they go other places. I’ll say, ‘Don’t you want to invite your friends over to watch a movie?’ and they’ll say, ‘No, no one wants to come here.'"

On being a teen now as opposed to the '60s: "I’m definitely glad that I’m growing up now instead of the ’60s, ’cause I think there are definitely more opportunities for me, but I mean, I love working on Mad Men because it’s set in the ’60s. The fashion was so amazing — it was a whole different world back then!"

On self-acceptance: "I don’t mind being different. Different is special! I think what matters most is what a person is like inside. And inside, I am happy. I am having fun. I am proud! I am Jazz!"

On innovation and influence: "It was quite a lot of work but it has really been worth it... in the long run we are definitely going to continue the project and try to commercialize it in whatever way we can. Then we can really begin to change the world" (on their winning project that explores bacteria in food production).

On confidence: "Growing up, [my tooth gap] was an insecurity of mine. 'How is any boy going to like me if I have a gap the size of Russia?' But now I am so comfortable with myself and I've found confidence. I want to be like Madonna. Madonna has a gap!"

On being a prominent female athlete in a country where women are less visible: "We are changing minds...[my dream is] to wave the flag of Afghanistan in the Olympics, to prove to the world that women in Afghanistan have progressed."

On feminism: "A lot of girls think it’s not shaving under their arms and burning bras and hating boys, which just seems stone age to me."

On being a millionaire: "That's big money, but when I'm out there I'm thinking about making birdies and hitting good shots and making putts rather than, 'OK, this putt is going to give me an extra thousand."

On staying down-to-earth: "I’m a normal 16-year-old girl who’s no different from my friends, but on the other hand, I have to portray that glamorous image of, like, Dior Couture! Chanel! Prada! That’s a character. It’s ‘the star,’ not ‘the girl.’ So in my brand, it’s all in one package. That’s just what you have to do."

Kylie and Kendall Jenner, Moguls—17 and 18

Kendell on words to live by: "'Dream big, work hard.' My parents brought up Kylie and me to be workaholics. That's something I really appreciate."

On being fearless: "All I want is education. And I am afraid of no one."

On staying positive: "The biggest adjustment was learning to not take any of that personally. You can’t take anything online personally, especially if it is negative. You can have 10 positive comments, but the one negative comment will get to you. I learned you have to stay focused on the people who love and support you."

On taking a stand for feminism: "For most people, being a feminist sounds so complicated. It’s always more convenient to not be someone with controversial opinions.

On making a name in business: "One of the biggest problems I had getting started was getting people to take me and my ideas seriously. I hope now they can see that I’m serious and that this is happening."