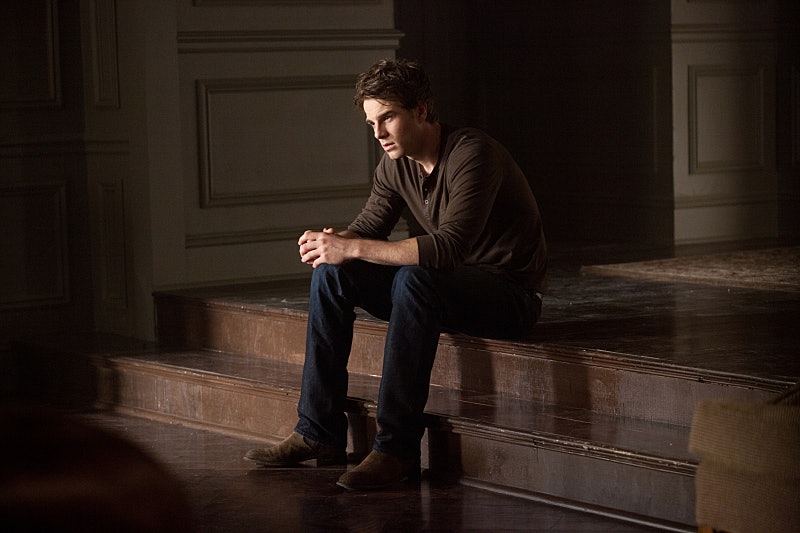 Well, that didn't last very long — not that I was expecting it to. Original family fans rejoiced last Monday when Kol Mikaelson returned during The Originals Season 2 premiere. Heck, I rejoiced when Kol reappeared because if that guy knows anything, it's how to shake things up a little bit. Sure, he was on Team Esther, but Kol is inherently fun and has a blatant disregard for the rules, so I wasn't worried about him being a wet blanket like Finn. And that hatred of rules, especially his mother's, took a toll on Monday night's new episode, "Alive & Kicking," because Kol's not on Team Esther anymore. And I can't really blame him for jumping ship.

Basically, Kol is not cool with being chalked up to collateral damage and not being privy to the plans going on that could endanger his life. Esther might have brought him back, but that doesn't mean she has any less disdain for the fact that her son is a vampire, even if he's hiding out in the body of a witch right now. On Monday night, Esther pushed Kol to have dinner with Davina in hopes of getting the location of the White Oak Stake out of her. And when he didn't do it fast enough, Finn and Esther set a pack of werewolves to break up their dinner and attack them both. Did I mention that Finn had no idea that he was being set up as live bait?

Well, that lack of knowledge proved fruitful, even if he was offended in the process. Finn had a front row seat to seeing Mikael (the vampire who hunts vampires) return to the French Quarter and whip some werewolf ass. But when Esther asked him how, exactly, a group of werewolves was massacred when it was only him and Davina in the restaurant during the attack, Kol lied. Esther made it perfectly clear to her son that he was only there to do her bidding, nothing more, and that she intended to kill him, along with Klaus and Elijah, as soon as her plan was finished. Well, that's not the pep talk and already shakily loyal follower needs to hear.

In what was a blatant act of rebellion from his mother's regime, Kol lied about the attack and claimed he'd been knocked out and missed the action. When, really, he saw perfectly that Mikael is alive and ready to eff things up. So, what does that mean for Kol's allegiance? Probably that he's ready to walk out on his mother the next time she sends him out on a mission and straight into the Mikaelson compound, begging to join the ranks with Elijah and Klaus. Because, at least with them he wasn't regarded as an abomination, just someone who couldn't handle their bloodlust.

Originals fans knew this was coming, Kol doesn't take to being told what to do and he loves himself too much to be the object of disdain. Heck, he dislikes his mother's opinion almost as much as he loves himself. So it was only a matter of time before he ditched her and her creepy servant-son Finn and moved onto the family he actually wanted to hang out with — Klaus and Elijah. Does this mean that Esther will pull the plug on Kol now that he's considering deserting her cause? I hope not, Esther might have brought him back just to serve her, but Originals fans need more Kol and Elijah and Klaus could really use the intel into what their mother is planning.