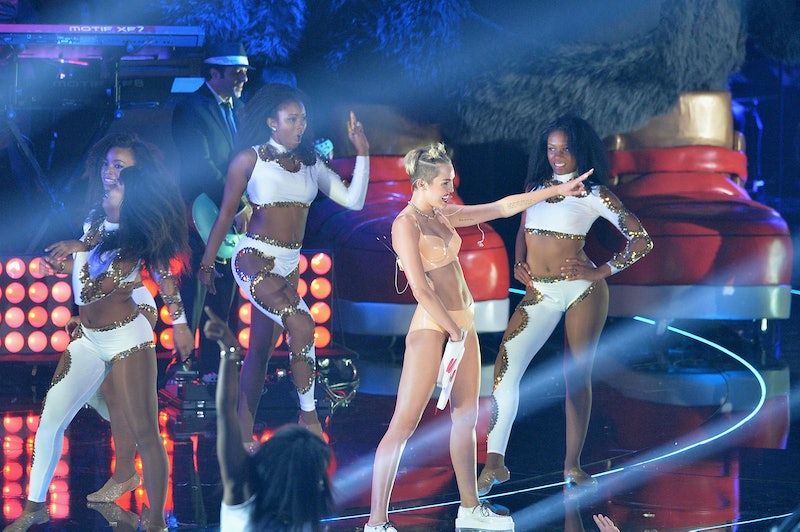 Well, it seems we've gotten to the point in Mileymania where there's no limit to who is worthy of commenting on Miley Cyrus's generation/moral/world-destroying ways. While Robin Thicke seems to have convinced himself he's responsible for spearheading some kind of feminist movement, Cyrus has now allegedly offended 75 percent of the world's populace, including (but oh, not limited to) that guy who invented the foam finger.

You read that right: There exists a reporter out there who reached out to the man who first invented the foam finger, clamoring to know how such a figure felt about Miley's highly public humping of the item. And he responded. And he does not feel favorably. And we love every minute of this.

Steve Chmelar is credited with the creation of the original "No. 1 hand" that you've seen at every major sporting event in existence since its invention in 1971. He was 16 at the time, looking to create a show of team spirit for his high school's Iowa state championship, and we imagine he certainly didn't think a former Disney darling would use it to simulate sexual activity in front of millions of people 42 years later.

Chmelar, now 59 and a VP of commercial sales at a construction supply company, had some thoughts on it:

I would say that it certainly misrepresented its intent to encourage team support. She took an honorable icon that is seen in sporting venues everywhere and degraded it. Fortunately, the foam finger has been around long enough that it will survive this incident. As for Miley Cyrus, let's hope she can outlive this event and also survive.

Unfortunately, Teddy Roosevelt could not be reached for comment on his feelings on the teddy bear propaganda used in Cyrus' performance.