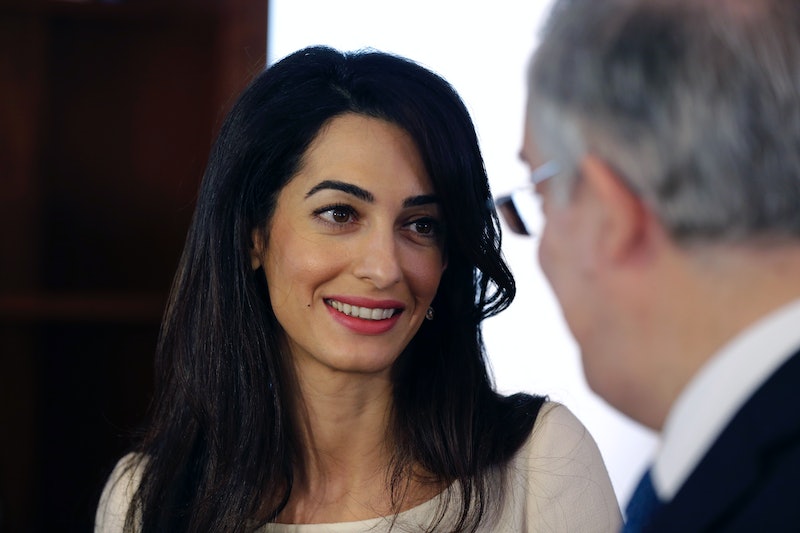 ICYMI, internationally esteemed barrister Amal Alamuddin got married to George Clooney this past month in a lovely ceremony at the Aman Canal Grande Hotel in Venice, Italy. Now, happily married, Amal has reportedly taken the next step in her relationship with Clooney: Her official profile page on her law firm's website now reads "Amal Clooney," signifying that the 36-year-old barrister has officially taken Clooney's name.

It's not an uncommon practice for a woman to take the name of her husband after marriage, obviously. But unfortunately, it seems like that hasn't stopped Amal from receiving flack on the Internet for the decision. From disappointed Twitter posts to full-on essays, some actually seem to be in strong disagreement — a few even going so far as to call it "anti-feminist":

Dear Amal Alamuddin, I know it’s none of my business, but why, why, WHY, in 2014, would you take your husband’s name? Perhaps I’m a just an old-fashioned feminist, but it’s an implied agreement of ownership. [...] As a human rights lawyer you are giving up a fundamental human right.

Twitter reactions were perhaps more muted than that, but they were still harsh in and of themselves:

Let's make this clear, now: A woman's personal achievements do not disappear once a ring is on her finger, and they certainly don't disappear if she makes the individual decision to take her husband's surname. It's problematic — and in some ways, anti-feminist in and of itself — to police her personal choice and claim that she cannot be both a wife and a strong, individual, successful woman at the same time.

Last I checked, feminism was still defined in the dictionary as, and I quote, "the belief that men and women should have equal rights and opportunities...the theory of the political, economic, and social equality of the sexes." There's nothing in there about judging the personal decisions of other women — feminism is about ensuring women have the same rights as men, and that includes the right to personal choice.

To judge other women, then, is not only disrespectful — we, obviously, have no way of knowing why she made the decision to change her name because it's really no one's business but Amal's— but it gives feminism a bad name as well. The Guardian 's reaction to the judgments thrown Amal's way sums it up nicely:

There’s nothing wrong with keeping your maiden name for these reasons. But refusing to acknowledge other perspectives indicates arrogance, and universalising this one, highly particular set of values risks de-legitimising other values and choices that might be just as crucial for different women.

It's perfectly OK for a woman to choose to keep her maiden name based off of her own beliefs, and it's perfectly OK for a woman to change her name after marriage based on her own beliefs as well. We must learn to be understanding and respectful of the decisions of others, because different factors influence different people when they make their decisions: whether they be linked to familial influences, traditional influences, or whatever else.

It's unfair to exercise judgment on anyone else for a decision that may not personally mesh with your own beliefs — we preach individuality and freedom of choice for exactly these reasons.