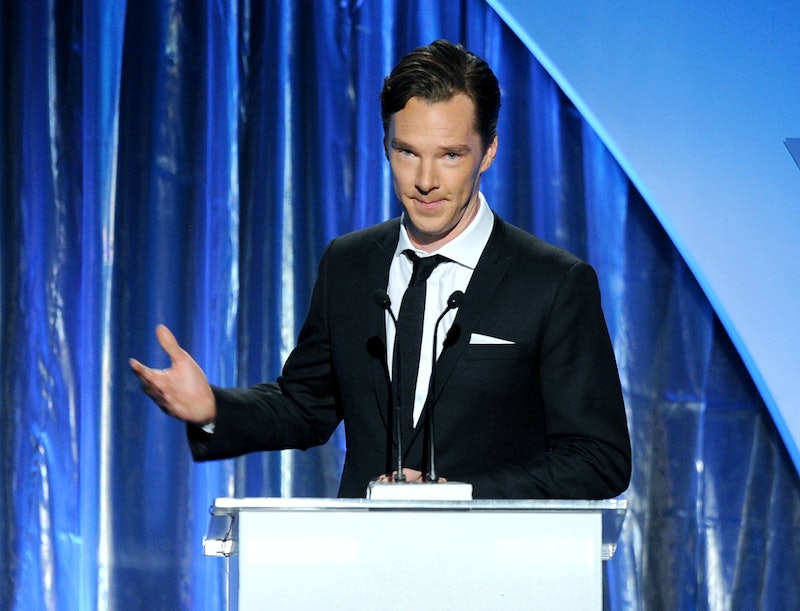 Every single interview that Benedict Cumberbatch does is a reminder that he is worthy of our undying affection and admiration. That is most definitely a hyperbolic statement, but as I am the self-professed president of the Brooklyn chapter of his fan club (population: me), I mean it with all honesty. He is unrelentingly honest and forthcoming, and projects an air of normalcy. Well, as much as one can for being a well-bred and well-educated immensely popular actor at the top of his game. In his latest interview with Out Magazine, Benedict Cumberbatch reminds us that he's worthy of portraying Alan Turing in The Imitation Game because he has no time for homophobes or bullies.

In this interview, the Sherlock star discusses his history of dealing with bullies and adolescent sexuality from his days in the all-male British prep and boarding schools of Brambletye and Harrow. His experiences there went on to inform the choices he's made as an adult and how he's viewed the persecution of homosexuals in history and in Hollywood. While Cumberbatch is a straight male, he is not in the close-minded subset of straight males who are incapable of discussing homosexuality with a sense of rationality and empathy in regards to the push-back gay people still receive in their careers, love lives, and in politics. He clearly knows a lot about his character Alan Turing, a mathematician who worked for the British government in secret during WWII, and isn't afraid of stepping up to bat to defend him for the genius he was and the service he did for his country and the world even though Turing's homosexuality was controversial at the time.

Stemming from his all-male schooling days, Cumberbatch had a front row seat to the kind of cruelty that young men experienced when they were persecuted for their sexuality. Of Harrow, Cumberbatch said they had a "low tolerance for homosexuality," and described an instance when two boys were publicly outed in the dining hall, telling Out, "They had been discovered in their house and in those days, if you were discovered with a girl you were expelled — there was no shame in that. But if you were discovered with another boy, you weren’t [expelled]. You had to survive all the horrendous prejudice you faced."

The actor obviously had the understanding from a young age that it was grossly inappropriate to be called out and berated for being gay, and it seems that this sentiment carried over in his reasons for playing Alan Turing. Cumberbatch thinks Turing, who was charged with "gross indecency" in 1952 for confessing to having a relationship with another man, wasn't being a martyr for a cause, but was instead just a great role model for anyone who ever felt different. The actor believes Turing deserved to be championed for his efforts in creating the code-breaking machine that helped win World War II. Cumberbath said:

And it’s tragic because you look at every single trajectory in his life and understand completely why he was different, why he stuttered, why he was isolated in his work. [You also see] why he was useless with men in any form of relationship — because he’d never experienced the love he deserved. And yet, within that, this man invented the idea of mechanizing mathematics — of a computer. He conquered, through cryptography, the Enigma code, which means he saved millions of lives, and, even as his body was morphing, was doing work on how the environment causes cellular structures to change. I mean, God knows, he probably would be celebrated as someone like Bill Gates. Without the shadow of a doubt, he would be held as a totem of the modern world.

Turing's death in 1954 was originally ruled a suicide by cyanide poisoning, though many suspect that it was actually a homicide. Either way, Turing received an posthumous official pardon from the Queen in regards to his charge in 2012. Cumberbatch basically considers the pardon to be unworthy of a man who did so much for his country only to be cast aside because he was gay. Cumberbatch said, "It’s an insult for anybody of authority or standing to sign off on him with their approval and say, ‘Oh, he’s forgiven.’ The only person who should be [doing the] forgiving is Turing, and he can’t because we killed him. And it makes me really angry. It makes me very angry."

For Cumberbatch, The Imitation Game is much more than just a period drama. He considers it a history lesson and a warning of things to come if we don't fight back against intolerance of any kind:

People are being beheaded in countries right now because of their beliefs or sexual orientations. It’s terrifying. It’s medieval — a beheading! I’d take up arms against someone who was telling me I had to believe in what they believed or they would kill me. I would fight them. I would fight them to the death.

He also admitted that Hollywood has a long way to come until actors don't have to consider their homosexuality a liability when auditioning for roles. The actor told Out, "I think if you’re going to sell yourself as a leading man in Hollywood, to say ‘I’m gay,’ sadly, is still a huge obstacle. We all know actors who are [gay] who don’t want to talk about it or bring it up, or who deny it." It seems that he talks about these issues so openly because he knows that we've made progress as a society, but still fears the public's proclivity for turning on people who are different when looking for someone to blame for society's problems. He explained, "Human rights movements and sexual and gay rights movements have made huge social progress in the last 40 years, without a doubt, but there’s a lot more work to be done."