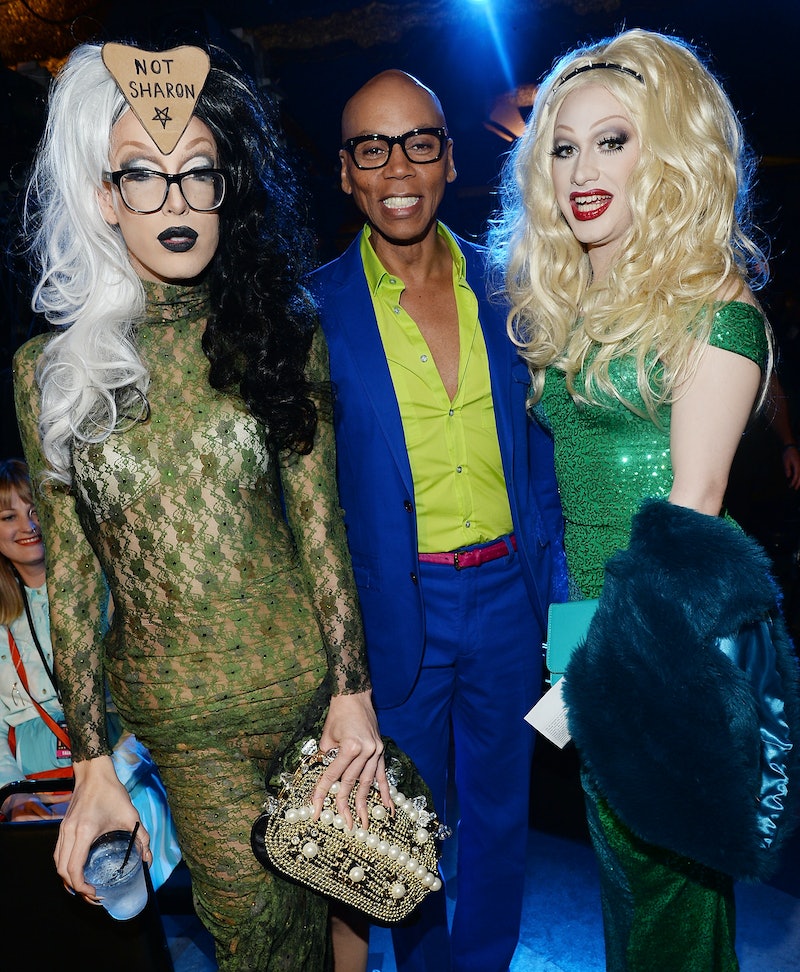 If you're trying to do Halloween right, why not take a lesson from the pros? After all, who better to take costume inspiration from than the former contestants of RuPaul's Drag Race. These ladies dress up for a living, and they always manage to look sickening without taking a trip to Party City for some overpriced swath of polyester. True, some of their looks would have people asking the ever-dreaded Halloween eve question: "So...what are you supposed to be?" As fabulous as it would be to ape Jinx Monsoon's Little Edie impression or re-create Milk's killer Workroom RuPaul, many mere mortals wouldn't exactly get the reference.

But of course, a Drag Superstar is nothing if not versatile. So here are some of the most classic costumes from some of the former stars of the RuPaul's Drag Race runaway. Go ahead, it's safe enough to try some of these looks at home. Because as we all know: you're born naked, and the rest is just drag.

Classic Halloween costume and runway look, this is Carrie 2.0. Put it on and flip your hair like you know you're the baddest bitch on the runway.

Step 1: The hat. That gravity-defying hat. Just how will you pull it off? Of course, you could always go sans-hat. People will still get it without, but it's one of the best things about Raja's ensemble. So...

There are no DIYs on the Internet for this one, unfortunately. But, depending on how crafty you are, you can always work a little magic with some styrofoam, red duct tape, wire, red fabric, and a really small bucket.

Thankfully, for the more lazy among us, you can purchase a copycat from The Fab Hatters.

Step 2: The dress, of course. Search through your mom's old prom dresses or just buy a plain spaghetti strap maxi dress, like this one from NastyGal or an even cheaper one over at Forever21.

Step 3: Blood and glitter. You can make your own or just buy a whole damn pint of it, just don't forget the glitter!

Manilla Luzon as a Hostess Cupcake

Step 1: Get a skater dress in a brown hue, like this one at American Apparel.

Step 2: Cut a circle out of cardboard, using the skirt of the dress as a guide. Attach it to the dress using hot glue (or even just staples). Lady Macgyver that shit.

Step 3: Attach a super-wide white ribbon to the front of the dress in loops (hot glue would probably work best for this one).

Step 4: Grab a tutu and slip it under your dress. Get brown to match, or white if you want to show off your cream filling.

Detox as a Silent Film Queen

Yes, there are a ton of blogs using the same photo of the same couple and telling you to dress in gray scale for Halloween. But were any of them serving up Veronica Lake realness like this?

Step 1: Pull out your most drop-dead gorgeous LBD, like this ModCloth wiggle dress.

Step 2: Grab some white and black cream makeup and some black lipstick and paint the town black and white. This tutorial is pretty handy:

It's a pun, it's a Simpsons reference, it's pretty much everything you could want in a Halloween costume. Plus, it's about the same level of difficulty as a 3rd grade arts and craft project!

Step 1: Get red poster board. An insane amount of poster board. Cut out a vague lady shape...you can make it as realistic or as outrageous as you want. Glue a square of yellow construction paper in the middle, and glue a smaller square of white paper over that. Write the Duff beer logo on the white paper in black marker, and then under that write Hilary. Voila!

Step 2: The finishing touches: make sure you're wearing something underneath the poster board (of course); a red bodycon dress would look best. Wig and glitter mustache are optional, but certainly appreciated.