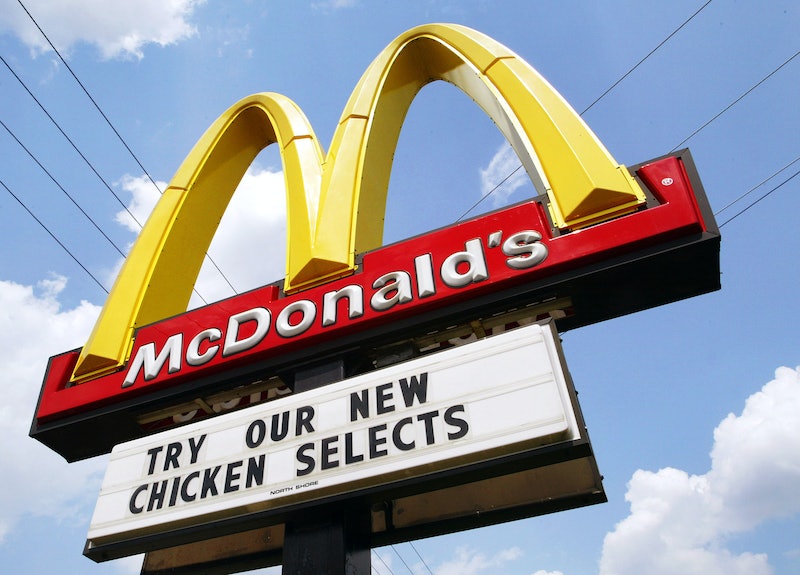 I'm pretty sure McDonald's has all but given up any widespread campaign claiming that it's healthy. The fast food giant has realized, finally, that we're smart enough to realize that anything on that menu would pass food-pyramid muster. So for its latest campaign, the home of the Golden Arches has dropped the egg whites and yogurt rhetoric for a much simpler message: McDonald's beef is real. And they've hired a MythBuster to prove it.

Yes, McDonald's enlisted Grant Imahara to show the world, once and for all, that McDonald's beef patties are, indeed, beef. In the new ad that rolled out Monday, Imahara heads to Fresno, California, to tour Cargill, one of McDonald's U.S. beef suppliers in search of the infamous pink slime and the other slew of disgusting things rumored to be found in McDonald's food.

Unsurprisingly, the place is completely spotless, the people are friendly, and there are no signs of disgusting things being put into beef patties. WOW! Who knew that an "investigation" sponsored by McDonald's itself wouldn't turn up a thing! I guess we have absolutely nothing to worry about with McDonald's food, because they told us that there was nothing in there.

The Cargill tour is part of a larger campaign from the company for transparency in its production process called "Our Food, Your Questions," which also includes question-and-answer sessions with customers in real time using social media. In August, a dragging sales report showed that millennials were dropping McDonald's in lieu of healthier options, which sent the company into a panic.

Have the young people finally figured out McDonald's isn't healthy?!

Yes, they have. And it still won't be healthy. While it's choosing to be more open about its sustainability, it isn't doing anything to, you know, change it.

But there is one impressive thing out of all of this: McDonald's is confirming a few things that we already knew. For example: It uses hormone-injected beef, its eggs aren't cage-free, and the chickens and cattle it uses in the food were fed with at least some GMO crops.

While I applaud opening the channels of communication and revealing food sources, it comes less out of a genuine concern for health more than a sales lag and a serious PR problem. And it'll have to do better than a self-sponsored, controlled tour to dispel the very public documentation of its unhealthy food.

More like this
This Dog Food Is Not Only Super Healthy For Your Pup, It’s Also Better For The Planet
By A. Graham
This TikTok Hard Seltzer Hack Involves A Milk Frother
By Alexis Morillo
The 9 Best Easy-To-Use Coffee Makers
By Vanessa Spilios
On TikTok, Orange Wine Is The Varietal Of The Summer
By Madeleine Aggeler
Get Even More From Bustle — Sign Up For The Newsletter