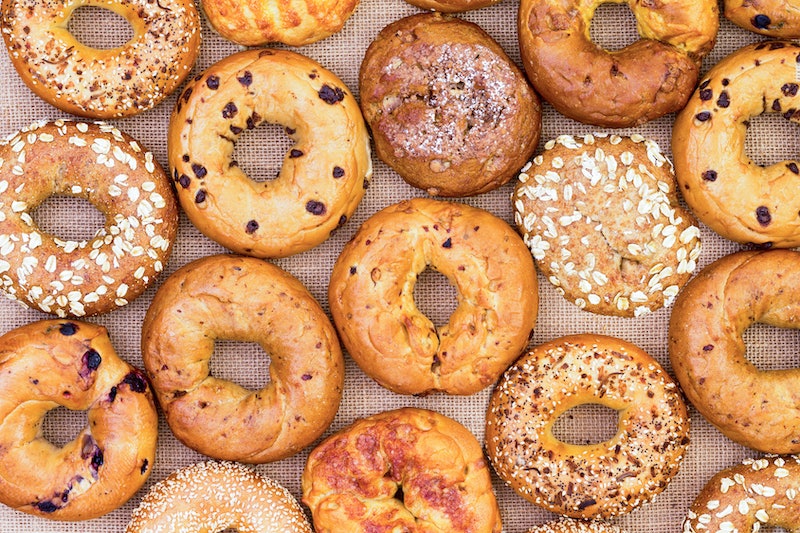 The fashion industry has been more than a bit consumed with food lately. Moschino debuted a collection straight out of a McDonald's drive through, Anya Hindmarch designed a line of snack food–inspired accessories, and, Racked.com announces, Chanel just launched a bagel bag. Chanel began its cuisine obsession with a Fall 2014 couture supermarket, which contained the most mundane of essentials branded with Chanel's signature double-C's. But no one was prepared for Chanel's Bagel bag, which made its grand-society debut at the premiere of the Baz Luhrmann–directed Chanel's No. 5 The Film. Swinging from the delicate wrist of India Meneuz, the Bagel bag featured a sesame seed-riddled outer layer sandwiching a thick helping of schmear.

Typically, I would be delighted by such a witty, insouciant accessory, but Chanel designer Karl Lagerfeld's words of dubious wisdom regarding spending money on clothing, not food, rung in my ears as I gazed at the purse. This is a designer who once related to Telegraph that he "lost weight to become a good clotheshorse." Is Lagerfeld finally laying down his arms in the battle against food? By any strict dieter's definition, a bagel and cream cheese is the holy grail of cheat foods, and now the prohibited substance has been made into an accessory worn by the slimmest of models.

In any case, the Bagel bag is poised to be the fashion crowd's latest must-have accessory, so prepare yourself for hunger pangs each time you scroll through your favorite street-style blogs.

UPDATE: The enigma of the bagel bag has been solved. Though India Meneuz added a Chanel charm to the now-notorious bagel bag, it was in fact designed by New York City-based artist Chloe Wise. The Concordia University-educated Wise in fact favors all kinds of food in her mixed-media art, from a simple baguette to Dominos Pizza, and the frenzy-inducing bagel bag is in fact a witty piece entitled Bagel No. 5. If the notoriety of Bagel No. 5 is any indication, Wise's work may be headed into a new stratosphere of critical—and sartorial—recognition.

More like this
An Ode To The Balm That Keeps My Hayfever At Bay
By Jessica Morgan
42 Black Owned Fashion & Beauty Brands To Support Today & Always
By Mekita Rivas, Shea Simmons, Kui Mwai and Dominique Norman
14 Linen Pants That Give Off The "Coastal Grandma" Aesthetic
By Lauren Alexis Fisher
Kim Kardashian Just Dropped An Underboob Skims Collection
By Allie Fasanella
Get Even More From Bustle — Sign Up For The Newsletter