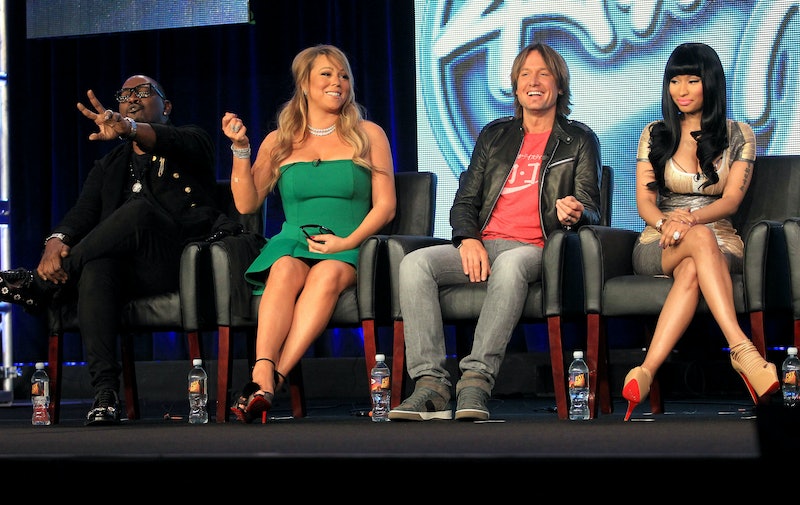 American Idol is having a hard time finding a final judge, apparently because they don't want a lady. Sources say that Fox is reluctant to hire another female judge because Nicki Minaj and Mariah Carey's constant fighting on the show "didn't play well with the show's key older female demographic," which is network speak for "ladies be fighting."

It's even more of a terrible idea when you factor in the fact that out of the 12 seasons that American Idol has been on the air, only five of its winners have been women. Before Candice Glover, there hadn't been a female winner of American Idol since 2007 with Jordin Sparks. And since American Idol is such an image-conscious show, even the women who do manage to win the competition do so under intense scrutiny about their appearance.

That's why it's so important that the show bring on more female judges, not fewer. Even though Carey and Minaj were prone to fighting, their season also brought us the first female American Idol winner in five years. It's important that the show have more than just one "token" female judge, a la Paula Abdul (who was never taken very seriously in the first place). And there's more than enough qualified women to be on American Idol.

It would be great to have Ellen DeGeneres back (who could really do just about anything), but there's a lot of smart women in the music business who would be comfortable doling out criticism. Kara DioGuardi proved to be a great addition to the show, and having another female music business insider on the panel would lend some seriousness that Idol desperately needs.

American Idol is no longer the cultural touchstone it once was, but it's still a huge influence in American pop culture. Having more than one female judge would not only encourage the female singers, it would better reflect our society — not to mention the show's own demographics.

Judges on American Idol don't just judge — they serve as mentors and coaches on the show, and it will be hard for a female contestant to imagine herself as a successful artist when she doesn't see many women behind that Coca-Cola sponsored desk.