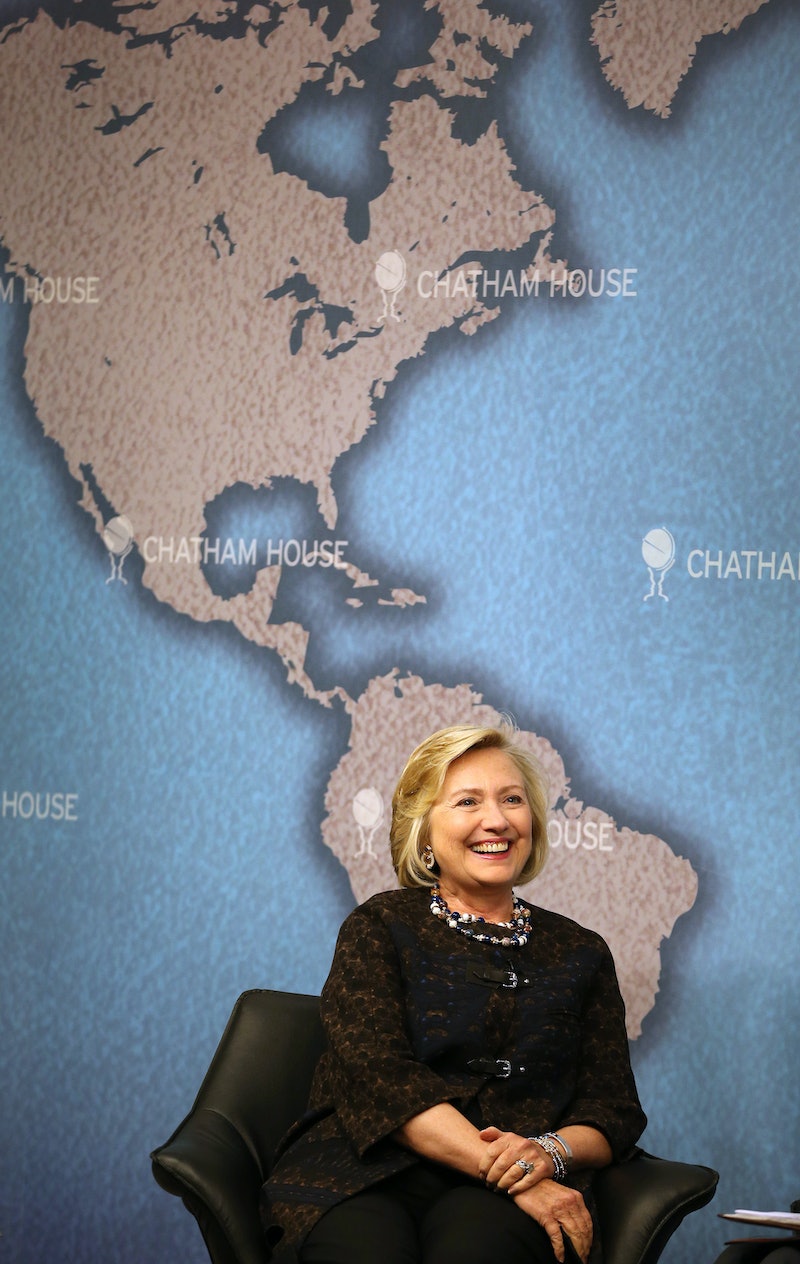 Sometimes, I dream of world domination. And sometimes, I dream of meeting Hillary Clinton. What's the difference, really? One just feeds straight into the other. And no one, I mean no one, appears to understand that better than 10-year-old Macy, who was insanely excited to meet Hillary Friday. Hillary Clinton, ladies and gentlemen, now elicits a stronger reaction from children than Santa Claus does. Better yet, she's not fictional, which must've contributed to Macy's intense excitement — after all, it's not every day that you run into a legend at your local coffee shop.

The joyous scene took place in a coffee shop in Denver, Colorado, where Clinton was helping Senator Mark Udall campaign in Colorado's tight senate race. And along the way, Clinton and Udall decided to make a quick pit stop for some coffee at cafe known for its latte art. Clinton is no stranger to trying the regional food offerings from her various trips around the country and around the globe. I mean, she has a burger named after her in her hometown Park Ridge, Illinois. After all, what better way to show appreciation for your constituents than by fawning over their food?

But in the Union Square coffee shop, people were fawning over more than just the lattes. While Clinton may have been most impressed by the pig in her coffee — and somewhat confused by the "marijuana plant" in Sen. Udall's cup — the locals weren't there for an art sighting. They were there for a Hillary sighting.

While Clinton may have been the only one with caffeine in her system, she certainly wasn't the most excited person around when Macy Friday showed up. With an expression of what can only be described as pure, unadulterated joy that was once the look pre-teen girls wore when they saw Justin Bieber, Macy's face is the perfect representation of all the feelings I can ever hope to have when meeting the woman, the myth, the legend herself.

Perhaps the only thing better than Macy's face in this photo is Clinton's shock at her reaction. While there isn't a video of this encounter on the Internet quite yet, I can only imagine that the sound that escaped Macy's open mouth was nothing short of an Amazonian battle cry. Hillary, it seems, cannot believe that any one person could be such a bundle of absolute elation.

So what was going through Macy's mind that fateful moment of the meeting? No one can know for sure, but as they say, a picture is worth a thousand words — here's an attempt at deciphering all those words on Macy's attempt. Or rather, the progression of thoughts I would have if I were in Macy's position.

With the vivaciousness only a 10-year-old could possess.

if i touch her will she disappear?

Probably not, but you should try it and see anyway.

if i touch her will I disappear?

It would be worth it.

oh my god i'm shaking her hand and neither one of us has disappeared.

I can only imagine that your mother would be the only person you would need to contact at a time like this.

thank god I chose a cute color for my braces!

Seriously, with a smile like that, who can resist?

It is probably all downhill from here. How do you improve from this moment?

I am never going to wash my hands ever.

Maybe Hillary transferred some of her awesomeness onto me.

god i hope she runs for president.

We're all waiting for these midterms for you to make an announcement, Hillary!

While political candidates have shaken a lot of hands and met a ton of fans, none of them have elicited quite as strong a reaction, especially not from children. Just check out some of these other child—candidate meetings.

Honestly, I can't tell if Bush or the baby is more uncomfortable here.

Why are they always pushing the crying children away?

Ok fine, this one isn't a good example because Obama proceeds to make this baby stop crying. But still, do any of these infants look all that thrilled about their politicians?

Hillary, do it for the children.