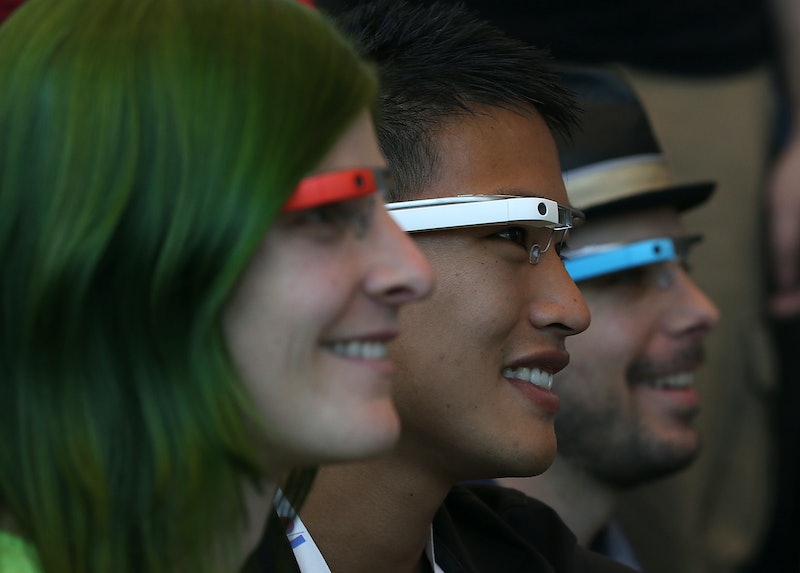 The hashtag #firstworldproblems was literally invented for this story — doctors in San Diego have diagnosed (and successfully treated!) the first documented case of Google Glass addiction. Before you laugh this off as just another ludicrous term coined for normal, everyday annoyances (because who doesn't have Restless Leg Syndrome, right?), give me a chance to explain the situation. Technology, my friends, is a powerful thing, and this type of addiction could happen to any one of us who spends 18 hours with a Google Glass attached to our faces.

The Guardian's description of the patient's symptoms almost fit into the plot of a post apocalyptic novel. The Navy serviceman first checked himself into the Navy's Substance Abuse and Recovery Program (SARP) last September for alcoholism. As part of the treatment program, doctors forbade their patients from attaining any alcohol, drugs, or cigarettes, but also eliminated access to any and all electronic devices. This meant that the serviceman was separated, for the first time in two months, from his Google Glass.

Dr. Andrew Doan, who leads the Navy's Substance Abuse and Recovery Program and serves as the head of addictions and resilience research, published a paper detailing the facts of the case in the journal Addictive Behaviors. As the Guardian reported,

Doctors noticed the patient repeatedly tapped his right temple with his index finger. He said the movement was an involuntary mimic of the motion regularly used to switch on the heads-up display on his Google Glass.

By the time the patient checked into the facility, he was suffering from involuntary movements, cravings, memory problems and dreaming as if he was wearing the glasses. When he was not wearing them he felt irritable and argumentative.

It should be noted, Doan wrote in his paper, that the patient was also suffering from a host of other ailments, and had a "history of a mood disorder most consistent with a substance induced hypomania overlaying a depressive disorder, anxiety disorder with characteristics of social phobia and obsessive compulsive disorder, and severe alcohol and tobacco use disorders." It has often been noted that individuals with severe addiction complexes are often more likely to develop dependencies on other substances, so it may be possible that the patient was predisposed to growing unusually attached to his Google Glass.

The chief difference between a Glass addiction and a drug addiction, Doan points out, is that there is "nothing inherently bad about Google Glass." Indeed, the patient himself used the wearable technology to aid him in his work, and many others have noted the potential benefits of having Google Glass handy in the medical workplace, like for recording and streaming surgeries.

But by the same token, the mundanity and seemingly harmless nature of Google Glass and other technology are likely the source of their danger. Google Glass, Doan explains, allows you "to be almost constantly in the closet, while appearing like you’re present in the moment." This likely creates a skewed sense of reality and prevents addicted users from fully engaging with anything outside of their self-created Glass world.

Happily, after completing his 35-day program, the patient exhibited "fewer withdrawal symptoms," and is currently participating in outpatient treatment. Doan writes in Addictive Behaviors that the serviceman "felt less irritable, was making fewer compulsive movements to his temple, and his short-term memory had improved," demonstrating that Google Glass or Internet addiction can likely be addressed using methods similar to those employed by doctors treating other drug and substance addictions.

Though this may seem like an isolated case, Doan believes that Glass addiction is only the first of many cases of Internet addiction that will soon emerge as people spend more time with and become increasingly attached to their technology. Last year, the first Internet addiction treatment center was opened in the United States in Bradford, Pennsylvania, and serves "those who have been unsuccessful overcoming the excessive use of the internet and electronic gaming on their own." While the American Psychiatric Association (APA) has yet to qualify Internet Addiction as a mental illness, the Bradford treatment center has developed a specific definition for the disorder that may soon change the APA's mind:

Internet Addiction is defined as any online-related, compulsive behavior which interferes with normal living and causes sever stress on family, friends, loved ones, and one’s work environment...The internet becomes the organizing principle of [their] lives. They are willing to sacrifice what they cherish most in order to preserve and continue their behavior.

Already, nearly 60 percent of Americans own Internet-connected smartphones, and according to a survey conducted earlier this year by Mashable and Nielsen, the average American adult spends 11 hours a day with some sort of electronic media. If you figure in about eight hours of sleep, that leaves only five hours every day during which we are not glued to some size of a screen or radio wave.

Moreover, the majority of Americans with smartphones make their electronic devices their number one priority, and according to a 2013 IDC report, 63 percent of smartphone users begin their day by checking their phones. Amongst 18 to 24-year-olds, this number is even greater — an astounding 79 percent of young adults immediately go to their phones upon waking up.

This is becoming a point of increasing concern for doctors and behavioral scientists. Daria Kuss, an Internet addiction specialist at Nottingham Trent University, told the Guardian that a technology addiction can be both an independent problem and lead to other problems. And while Internet addiction has yet to be formally recognized, alcoholism was not recognized as a disease until the late 1950's.

So if you start to feel a "heightened sense of euphoria while involved in computer and Internet activities," or that you are "neglecting sleep to stay online," it may be time to re-examine your relationship with technology, and step away from the Google Glass.