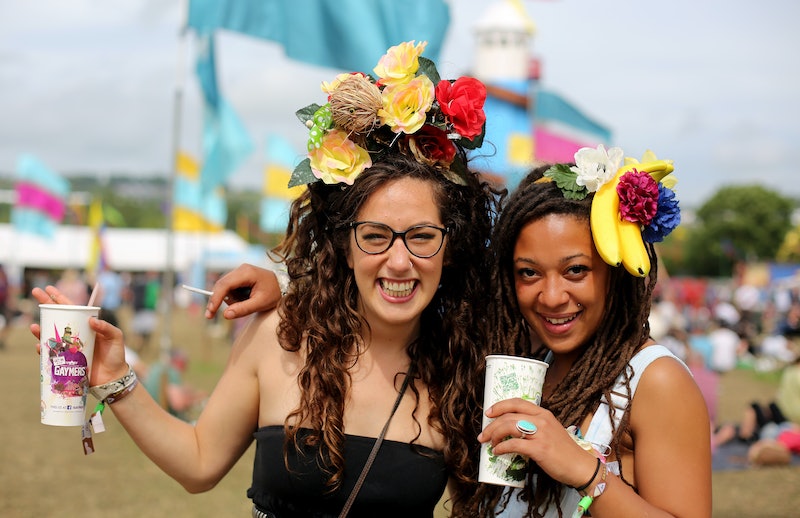 Music festivals are known for straddling the line between what's socially "acceptable" and what's not. We've all heard of the craziness that is Coachella and Bonnaroo; I think everyone has that friend who goes one year on a whim, and comes back telling everyone that they, "like, didn't shower for four days, but oh, my God, Kanye was amazing." But for the music scene on the other side of the pond, Glastonbury is the biggest festival around. It's muddy, messy, and just about as filled with controversy as any other festival. So when Daniel Roud started a petition online to ban the sale of a potentially offensive item, no one could be that surprised. But then something surprising happened — with only 65 signatures on the petition, Glastonbury officially banned the sale of the "Indian headdresses" for its 2015 event.

While Roud, who initiated the petition, also called for Glastonbury to issue an official statement on the matter to raise awareness of the sacred nature of the headdresses, those in charge of the music festival simply updated the official list of banned items recently. Other items that are not allowed to be sold in the vendors market at the festival include cigarettes, candle flares, and flags. However, Roud told the Guardian that he still considers the change in policy to be a victory.

“Our petition, small in numbers but passionate in support, pushed this issue right up to Emily Eavis, and she listened,” Roud said.

Eavis, the co-organizer of Glastonbury, has yet to issue any statement on the matter herself, but her swift and appropriate response to the issue is still something to be admired, and certainly something other organizations and brands can learn from. Urban Outfitters, are you taking notes?

UO has found itself in hot water multiple times now for selling offensive Native American–themed items — oh, and also other just generally offensive pieces; I think we all remember the whole Kent State sweatshirt debacle. Maybe American retailers should follow in Glastonbury's footsteps listen to their customers/the general public about what's offensive and what's not.

While sometimes the potential of an item to offend may be obvious (really, though, who thought the sweatshirt was a good idea?), often times items appear so often in pop culture that we forget that there are cultural and spiritual meanings to them. I mean, Pharrell wore a feathered headdress once too, right?

So while they may not be issuing an official statement or, for that matter, making this change into a soapbox to proclaim that they are more socially/culturally sensitive than other organizations, Glastonbury did something very right here. Hopefully other organizations and brands will take note and follow in their footsteps.

More like this
Lizzo Celebrates Juneteenth With Pan African Flag Dress
By Dominique Norman
Dua Lipa’s Best Looks From Her ‘Future Nostalgia’ Tour
By Dominique Norman
Yes, You Can Buy Off-White’s New Beauty Range In The UK
By Tomi Otekunrin
10 Show-Stopping Manicures From The 2022 BET Awards
By Paris Giles
Get Even More From Bustle — Sign Up For The Newsletter