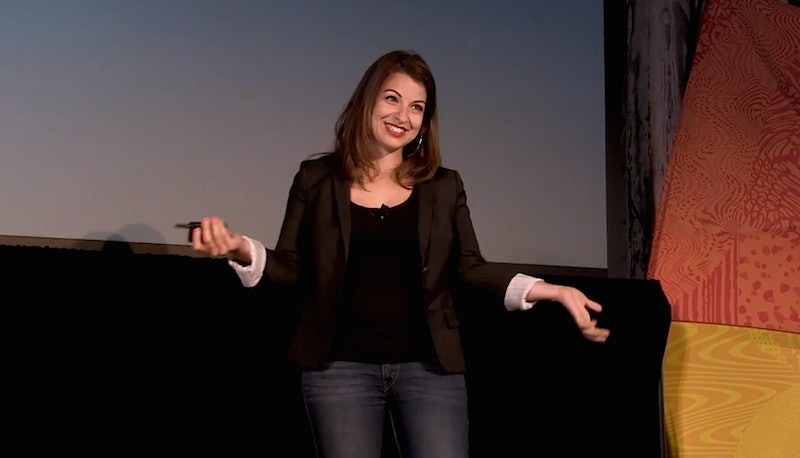 Have you heard of Anita Sarkeesian? If you haven't, you should, because what's happening to her deserves your attention. She's a feminist pop-cultural critic by trade, and for the past two years she's been living under repeated threats of violence by a cabal of internet harassers and conspiracy theorists, all for her sin of producing measured, calm analyses of sexist tropes in video games. As such, what happened Tuesday may not have been unique, but it was nonetheless shocking — Anita Sarkeesian was threatened with a school shooting at Utah State University, in a threatening email sent by an anonymous, apparently terrorism-minded anti-feminist.

The threats, contained in an email sent to school administrators in the lead-up to Sarkeesian's scheduled speaking engagement, is very clear about precisely what's motivating it's violent warnings — overt, blatant misogyny, as voiced by a "USU student" who says "feminism has ruined my life." It's frightening, to say the least.

What's also frightening is that this isn't the first time Sarkeesian has been targeted by a possible mass murderer. As she tweeted Saturday, she's also appeared on stage at three separate events that have drawn bomb threats, most famously the 2014 Game Developer's Conference in San Francisco earlier this year, and in September was forced from her home by death threats on Twitter.

The school shooting threat against Sarkeesian was unabashedly bloodthirsty, predicting over a dozen deaths if her event was allowed to go forward, by means of "a semi-automatic rifle, multiple pistols, and a collection of pipe bombs." But it's very important to note, as Sarkeesian's emphasized, that the cancellation of her event wasn't due to the threat itself, but rather what came afterwards.

According to Sarkeesian, the decision to cancel was due to the refusal by authorities to screen for firearms. Utah, you see, is one of those open-carry states, so there's nothing illegal about toting a gun around the USU campus, provided you have the right permit. She tweeted the explanation Tuesday, which was confirmed by the University.

Forced to cancel my talk at USU after receiving death threats because police wouldn’t take steps to prevent concealed firearms at the event. Requested pat downs or metal detectors after mass shooting threat but because of Utah’s open carry laws police wouldn’t do firearm searches.

Of course, this sad story wouldn't be complete without a bunch of internet idiots picking it apart to try to find out how Sarkeesian or her cohorts were behind it all along. At the same time as they're caught up in a massive harassment campaign (which has been in full swing since she announced her Tropes vs. Women in Video Games Kickstarter over two years ago) there's a complete inability to believe anybody dislikes her enough to make a sincere threat. It's an alarming lack of self-awareness, to say the least.

If you're curious to see Sarkeesian talk about her experiences at the center of an online hate campaign, do yourself a favor and watch her recent talk at the XOXO Festival in Portland. It's nothing if not instructive.

Perhaps the saddest aspect of this is that none of it seems likely to change for Sarkeesian anytime soon, at least not unless a whole lot of people suddenly sprout consciences over the coming weeks, with seems doubtful. But, I feel moved to make this direct, personal appeal all the same:

Please stop harassing and threatening Anita Sarkeesian. She's never done anything to deserve it, because nobody could. She made a series of videos that a lot of gamers both didn't like, and didn't quite coherently understand — that's the honest, true foundation of all this. And while not everyone who criticizes her is making terroristic threats, obviously, this paranoid atmosphere surrounding her is becoming incredibly dangerous.

Hey gamers: If you're not "harassing" her, but just "asking questions," take a step back to really think about the stakes in all this, and why you're doing what you're doing. Getting ready to annotate a twitter screenshot about how she's faking her death threats? Just don't do it!

Planning a transparently animus-driven "documentary" about what a lying scumbag you think she is? Is that really worth it, considering lives are being threatened and it all boils down to a difference in critical analysis? Besides, it's not like you've got no options — maybe go back to making your racist YouTube videos instead? Because honestly, the toxicity in this area is dangerously out of control, and wild-eyed conspiracy theories only serve to fuel the fire.

Luckily, Sarkeesian doesn't let the abuse silence her, and that's why she's very insistent about clarifying why she cancelled — not the threat, but the lack of security. Lest there be any doubt about her courage and resilience in the face of all this, the event would've gone forward if she could've been reasonably assured that firearms would be excluded. But thanks to Utah state law, they couldn't, which is yet another worthwhile conversation.

More like this
The Most Powerful Photos From The Weekend’s Abortion Rights Protests
By Melanie Mignucci
The Families Of Grenfell Tower Are Still Waiting For Justice, Five Years On
By Bustle UK
Why You're Seeing Green Bandanas At Abortion Rights Protests
By Lexi Inks
5 Concrete Ways To Take Action Against The Rwanda Deportation Plan
By Rachel Mantock
Get Even More From Bustle — Sign Up For The Newsletter