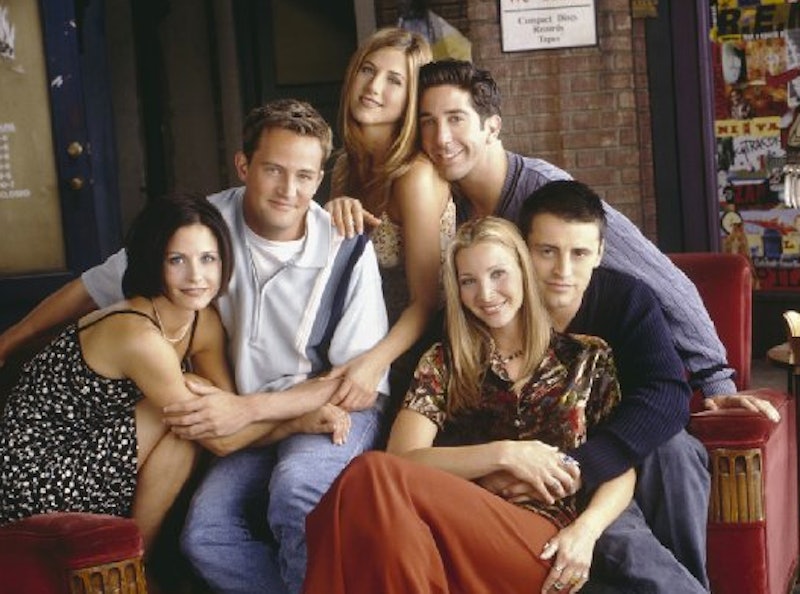 I bet you thought you’d never see the day when you’d be able to hang out with your six friends — Monica, Joey, Chandler, Rachel, Phoebe, and Ross — at Central Perk. You know, sit on the orange couch, talk about your problems, and participate in sitcom hijinks, all while being able to pay for New York rent without seeming to work. Could it be anymore perfect? OK, maybe that's not exactly what's happening, but the latest Friends news is a close second. Friends is coming to Netflix, you guys, and we all know what that means. Yep, we’re all going to spend some quality time with our six best friends and binge-watch the crap out of the best sitcom ever... Or at least review our favorite episodes, because while we might continue to ask each other "how you doin’?" and sing the refrains of “Smelly Cat,” it’s always a good idea to return to the original canon.

Yes, I know. I could have watched reruns on TBS this whole time, but having Friends on Netflix means I get to choose what episodes I feel like watching. It means I can avoid the Rachel-Joey relationship if I want or just watch all of the Thanksgiving episodes to get in the holiday spirit. Heck, I'll watch the series backwards if it comes to it.

So, I give you what I take to be the top episode to watch from each season. They’re obviously up to debate, as most Friends episodes are truly amazing, but just hear me out.

Episode: Pilot, aka "The One Where Monica Gets a Roommate"

Why: It's a staple. Not only do we meet everyone for the first time, but it's sort of adorable to watch just how young they all look. They just don't know what's in store for them once Rachel walks into the coffee shop in her wedding dress.

Quote: I personally am a fan of Rachel's "I'm a shoe" monologue where she stands up to her father on the phone, but I have to give the best quote to Monica. She tells a broke Rachel, who no longer has her dad's money: "Welcome to the real world. It sucks. You're gonna love it."

Episode: "The One Where Dr. Ramoray Dies"

Why: Poor Joey. His hubris at playing Days of Our Lives favorite Dr. Drake Ramoray gets to him and he says he writes a lot of his own lines, leading to the writers to extract revenge. It's a lesson we should all keep in our hearts. Yes, I debated long and hard if this or "The One Where Eddie Moves In" should be ranked here, because that episode showcases the "Smelly Cat" music video, but I went with this one because of the side story where Rachel and Monica both want to have sex but are down to their last condom.

Quote: Joey for giving me the stock reasoning of "They can't kill me! I'm Francesca's long lost son!"

Episode: "The One Where No One's Ready"

Why: Probably my favorite episode. I think because it basically all happens at the girls' apartment and takes place over just a few hours or so. Everyone's supposed to get ready to go to an event for Ross, and as the title says, no one is. Rachel is mad at Ross for something he said and Chandler and Joey are arguing and taking each other's clothes. I've been there, Ross. I know your pain.

Quote: From Joey, who is wearing borrowed pants, to Chandler who is hiding his underwear: "I'm not going commando in another man's fatigues!"

Episode: "The One with Ross's Wedding (Part One)"

Why: This was tough as this season also has the episode with Chandler in a box, but I inevitably went with "The One with Ross's Wedding (Part One)" because it's so pivotal. I mean, come on, Monica and Chandler hook up? Ross says the wrong name at the altar? It's all gold. This episode also gets major props because Hugh Laurie is Rachel's airplane companion.

Quote: Not a quote, just a montage of Joey and Chandler being tourists in London, including a moment when Joey tries to jump into a map:

Episode: "The One in Vegas"

Why: Phoebe perfectly describes how freeing walking around an apartment naked can feel, and Ross draws on Rachel's face while she sleeps using a permanent marker. Also (and this is a big "also") Ross and Rachel accidentally get married.

Quote: As Ross and Rachel drunkenly leave the chapel:

Episode: "The One with the Apothecary Table"

Why: OK, so what if it is product placement? I love this episode because of how big Rachel's lie gets. She tells Phoebe she got an apothecary table for their new apartment from a flea market when it's really from Pottery Barn. It gets even better when Ross gets in on it because he, too, is a Pottery Barn nerd.

Quote: Ross asks Rachel to list out other eras other than colonial and she replies, "Well, there's yore, and uh, y'know, yesteryear."

Episode: "The One with Nap Partners"

Why: Because sometimes having a nap partner is a good idea and Joey and Ross show us that.

Quote: As Rachel and Phoebe made up after arguing over who should be Monica's maid of honor:

Rachel Hi! I just want to apologize. I’m really sorry I was a baby.Phoebe: That’s ridiculous Rachel, we were all babies once. Oh, you mean today.

Episode: "The One Where Chandler Takes a Bath"

Why: I honestly never thought baths were that relaxing until I heard how Chandler took his. Don't knock it! It's a manly bath because he has a boat! Plus, Ross and Rachel debate baby names like Ruth and Sandrine, which say so much about them.

Quote: Joey asks Chandler if they could have a serious talk and Chandler responds, "Yeah. Is this a cold pizza talk or a leftover meatloaf talk?"

Episode: "The One Where Monica Sings"

Why: A few doozie reasons for this choice: Mike, played by Paul Rudd, somehow convinces Phoebe and Monica to come to his piano karaoke bar. Monica gets power hungry on the stage but it's really her see-through shirt. Joey gets Chandler to do his eyebrows.

Quote: This conversation between Chandler and Ross about Ross dating again:

Chandler: Single white male, divorced three times, two illegitimate children.... The personal ad writes itself.Ross: That's funny, yeah... yeah. So, do you think you'll ever work again?Chandler: What are you doing? You know I can only dish it out.

Episode: "The One with Princess Consuela"

Why: I voted against using "The Last One" because while I do love that Phoebe used a broken phalange to stop the plane and that Ross went to the wrong airport because New York is hard and has two airports, I have to admit that the episode where Phoebe changes her name takes the cake. Not only does she decide to change her name to Princess Consuela Banana Hammock, when she really just needed to change her last name to Hannigan, but Mike decides to go with Crap Bag, thus out Phoebe-ing Phoebe Buffay. Served.

Quote: Phoebe on introducing her husband: "If you need an easy way to remember it just think of a bag of crap."