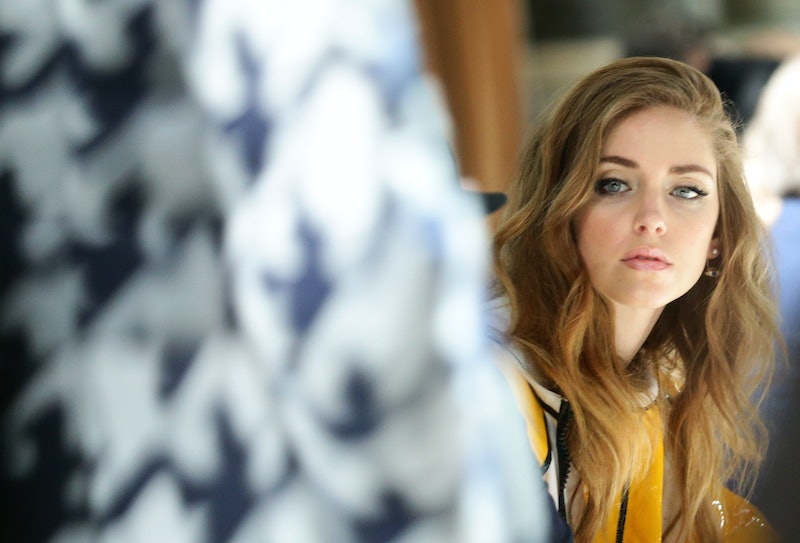 Fashion blogs are dying. Sure, we may still have all of them bookmarked on our computer. We all still love to chat about our favorite famous style bloggers and we all follow them on Instagram. And, if we're being honest here, most of us fashion lovers have some form of a personal style blog ourselves. Maybe you haven't posted in years, maybe you're in the process of re-designing, or maybe you post regularly. But simply put: We all love the idea of a fashion blog. And who can blame us? A one-way ticket to free clothes and events by simply sharing our well-stocked closets and general knowledge of a DSLR — all sounds pretty good, right? Of course.

Because of that idea of instant fame and glamour, for a few years, fashion blogs were simply IT. It goes without saying that the most elite and successful fashion blogs were outnumbered by thousands of blogs with smaller followings, but the fact of the matter is that fashion blogging became a major, major component of fashion itself. It was the link that finally, truly connected "real" people to high fashion. But here's the hard truth: That era is over.

Whether we like to admit it or not, fashion blogs are simply not what they used to be. Somewhere along the way, we stopped religiously checking our favorite bloggers' posts every morning, and decided instead to take the short cut of following them on Instagram. As much as it might pain some of us to let go of fashion blogs as we've known them — a feeling akin to leaving behind real books for an easier, more convenient tablet — when we really stop to think about this for a second, it makes sense. Year after year, thousands of fashion blogs were created. How could we possibly keep up with the amount of blogs being thrown at us?

You know that feeling when you see a trend you are immediately drawn to? You may not know exactly why at the time, but you have to get that pair of XYZ. And for a few weeks after your purchase, you're obsessed. But then slowly, but surely that pair of whatever starts to lose its appeal. Why? Because, suddenly, the trend is everywhere. And it really doesn't seem so special anymore, does it?

That, and a million other factors, are contributing to the death of the the fashion blog as we've known it. Here are 11 of the biggest, most talked about reasons why fashion blogs are on their way out.

Who needs a website when you can have an Instagram? You can post the same images more quickly to a bigger, more responsive audience. Sure, most fashion bloggers still post on their websites as well, but the follower counts of some of the most famous style bloggers of the moment speak for themselves. Kelly Framel of The Glamourai boasts 106,000 followers on her account, while blogger Bryan Boy has 554,000. Checking your Instagram feed is often more convenient than opening a web page; it's as simple as that.

Speaking as someone who started a baby fashion blog when I was just a college freshman, part of the problem with blogging is that you start out thinking, "Of course I can do this as well as the most famous bloggers!" It seems easy enough, but the truth is that you're one blog out of millions. It starts to seem overwhelming. In essence, the appeal of starting a fashion blog is the same thing that will be its downfall: Everyone does it. As Ashley Robison touched on in an article entitled, "Is Fashion Blogging Broken?" there's simply too much pressure.

4. It's All A Little Narcissistic

We all like the occasional selfie. We all like showing off our newest, most beautiful pair of shoes. It's understandable to want to share when you're feeling beautiful or proud of your outfit, and there's certainly nothing wrong with that. But posting photos of yourself online every single day and getting paid for it? When you start to think about it, it doesn't really seem that appealing at all — well, unless you're the person doing it. While Internet self-obsession certainly isn't limited to fashion bloggers, the mindless "shameless narcissism" of blogging, as Odell calls it, is certainly not working in the medium's favor.

5. They No Longer Seem Relatable

It was recently reported that Chiara Feraggni of The Blonde Salad makes up to $8 million a year. As much as we all love fashion bloggers' posts on Instagram, something about realizing that a fashion blogger is making more than teachers and doctors is a little unsettling.

The fact of the matter is that posting photos of your daily outfits doesn't really bring much to the table. Aesthetically, it's all good and well; of course, it's fun to browse through images of great fashion. But where's the brand? Where's the vision? Where's the creativity? That's what many fashion blogs lack, among other things. Refinery 29 interviewed Gala Darling, co-founder of The Blogcademy (a workshop that teaches people how to monetize their blogs) on the subject of fashion blogs being dead. While Darling said she thought blogs were still very much alive, she also said that bloggers need to be more creative to be successful.

"Any blogger who doesn't have some kind of offering beyond advertorial or banner space is insane," Darling said.

But that's the problem in itself—bloggers aren't generally looking beyond that.

As Odell stated in her article for BuzzFeed, new sites are gaining popularity that actually provide real, journalistic content. It's still creative, but it's a less in-your-face, less self-obsessed medium that, at the end of the day, is producing real, diverse content with depth and creativity. Odell named sites like Into the Gloss and P.S.-I Made This as more content-based sites that are slowly gaining popularity over personal style blogging.

9. Celebrities Are Back In Fashion

If you haven't already realized from all the Kim and Kanye fashion week sightings last month, celebrities are returning to the front row's of fashion shows. And because the presence of many fashion bloggers contributes to, as Bryan Boy described in an interview with Paper Mag, the much-hated media "circus," many fashion shows would rather have Kanye than a ruckus-causing blogger.

Let's face it: The most famous bloggers are also the most attractive. They may not look like cookie-cutter models, but many fashion bloggers are picking up contracts with major modeling agencies anyway. While it's great that "real" people are being granted access to an otherwise very non-diverse industry, you end up asking yourself how "real" they really are exactly.

At the end of the day, fashion blogging is/was a trend — yes, a huge, worldwide, insanely popular trend, but still just a trend. It was unique, it was relatable (for a time, anyway), it was fun, and it was new. But with all trends, as it got more popular, it all started to look the same. As Eva Domijan of Dressful pointed out in an article on the issues of fashion blogging, the medium has lost the majority of it's individuality. Why? Because it is/was a trend. And trends change. And so will fashion blogging, if it survives at all.