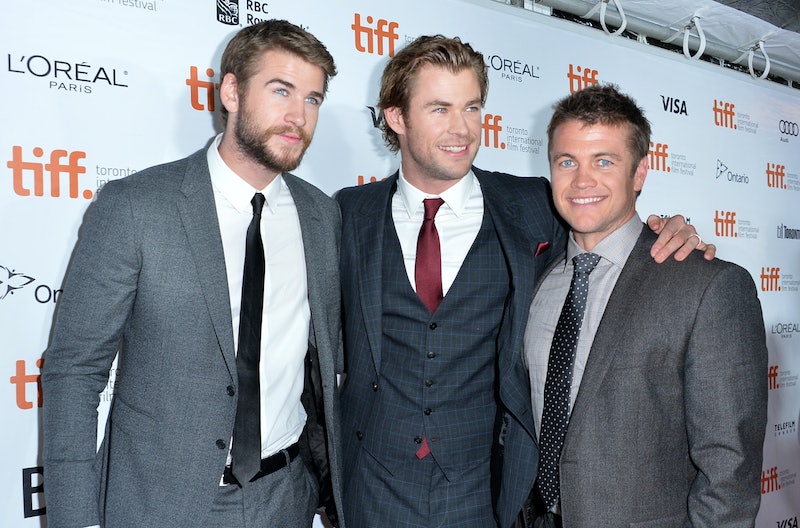 I hereby petition that Leonie Hemsworth be canonized for the three glorious, life-changing things she gave the planet. I am, of course, referring to her sons Chris, Liam, and Luke Hemsworth, a trio of genetic perfection that hasn't been seen since the days of Adonis. On top of looking like they were sculpted from precious marble, the three Hemsworth bros have some pretty sweet acting skills between them. Chris, 31, and Liam, 24, may be the most recognizable faces of the group thanks to their work in extremely popular film franchises like The Avengers and The Hunger Games, but eldest brother Luke, 33, has plenty of roles under his belt, including the upcoming movie with Ian Somerhalder, The Anomaly.

While I can definitely appreciate (and obsess over) each and every one of their individual films, I can’t help but wish that the Hollywood stars of fame would align and the three Hemsworths would finally be able to star in the same movie. I know that might be too much beauty to handle on one screen, but a girl can dream, right?! Since it doesn’t look like it’s in the works quite yet, I took the liberty of re-imagining some of their popular flicks from the past and updated them with three times the Hemsworth.

Chris: "Dude, just kiss her already. You're being lame."

Liam: "What do you mean this isn't Asgardian battle armor?!"

Chris: "I'm gonna smack you both with Mjolnir. Don't think I won't."

Chris: "That gun is so small compared to my hammer."