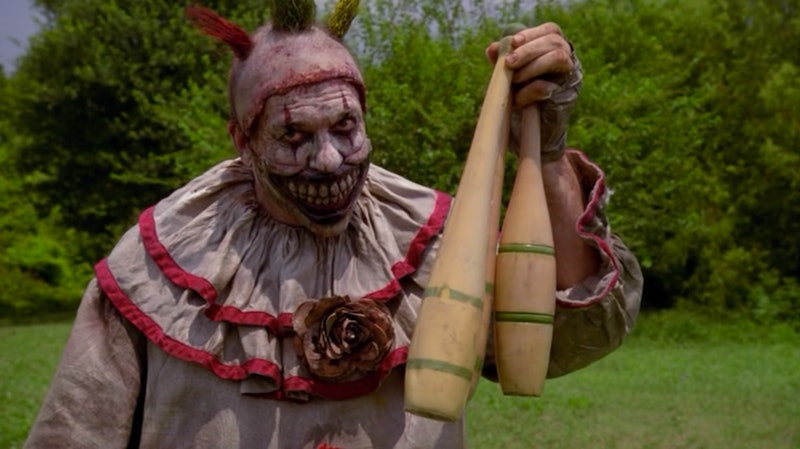 This is probably the weirdest American Horror Story complaint that I've heard about the show during its nearly four-year run. According to The Hollywood Reporter, real-life clowns are mad at AHS: Freak Show for the depiction of Twisty the clown on the show — so much so that the president of the Clowns of America International has spoken out about it. (No, I didn't know there was a Clowns of America International group either, but let's just all go with it.)

"Hollywood makes money sensationalizing the norm...They can take any situation, no matter matter how good or pure, and turn it into a nightmare," the president, Glenn Kohlberger said of the show. Apparently, the group is mad that Twisty is depicted as a psycho murderer, because it gives them — real clowns — a bad name. Clearly, they have chosen to ignore the fact that AHS freak show is literally a show about the supernatural and that Twisty only has half a face, but whatever floats their boat.

"We do not support in any way, shape, shape, or form any medium that sensationalizes or adds to coulrophobia or ‘clown fear,'" Kohlberger continued.

Look, I can kind of get where they're coming from — clown phobia is already pretty common, and I'm sure all the nightmares that people are having after seeing Twisty on AHS (myself included) aren't helping that image. But AHS is also a show that involves other dark themes, and shouldn't be treated as if it has any root in reality. It's a fun horror show, end of story.

Also, if they really wanted people to be less terrified of clowns, maybe they should start by making that ridiculous make-up less creepy.