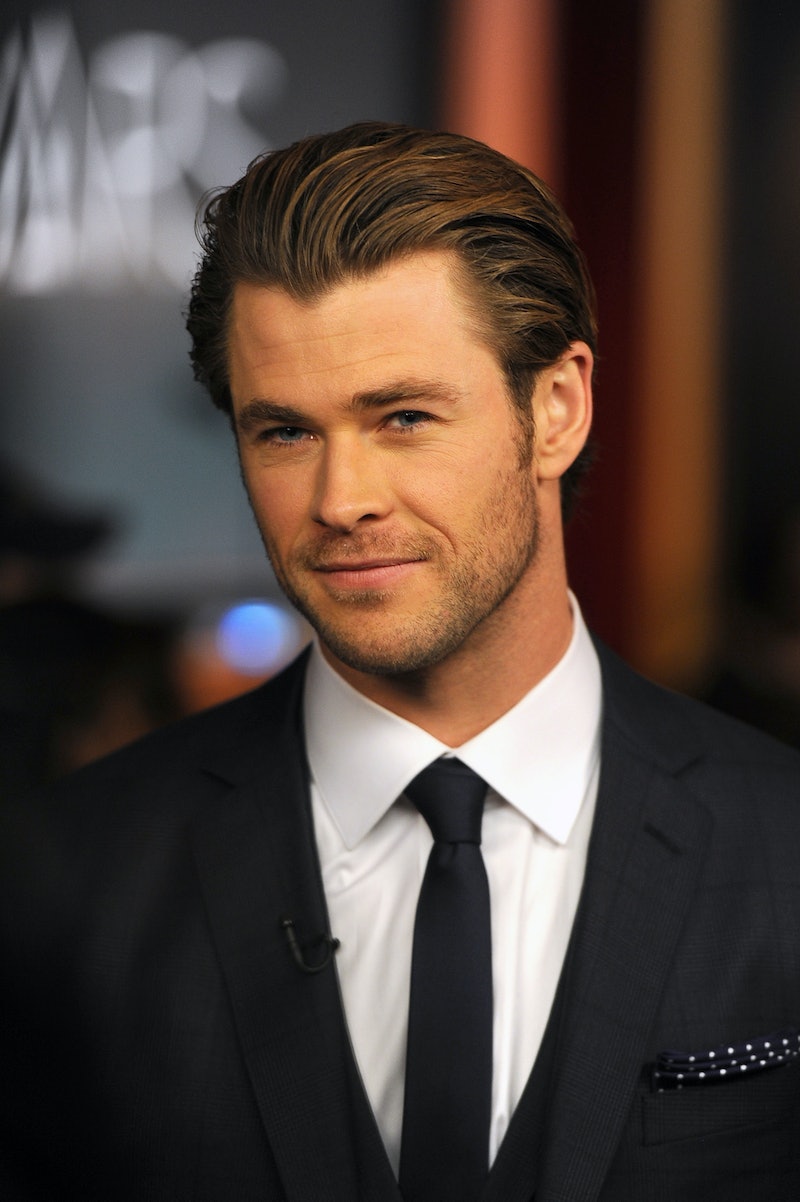 It's like Lord of the Flies, just with adults and possibly a little less scarring — just kidding, it's pretty scarring. Like, gigantic whale crushing your ship under its massive tale-scarring. The first trailer for Ron Howard's In The Heart Of The Sea is here and its everything you'd expect from a survival film based on the tale of the Essex, the ship that inspired Herman Meville's Moby Dick. The film, which is based on Nathaniel Philbrick's novel by the same name, stars the inimitable, flowing locks of Chris Hemsworth — oh, and the Thor actor as well. And, while the CGI whale the fact that this film includes cannibalism will freak you out a bit, Hemsworth, his befuddled expression, and his billowing locks are the real star of this movie. Which, I guess would make it a kind of sexy version of Lord of the Flies?

I'm sorry, but I just kind of have a hard time feeling the desperate need for a man's survival when a trailer keeps cutting to shots of Chris Hemsworth, standing on a ship's deck, looking out at the ocean like life is the most confusing thing in the world while his hair billows in the wind. I feel like science should just prove already that it's impossible to not be distracted by Hemsworth — even when his American accent is actually pretty damn good.

Deadline writer, Mike Fleming Jr. says of the film: "It’s the story of cruel survival that involved leadership, cowardice, bad decisions, and cannibalism." (See, I told you — Lord of the Flies.) And, normally, that would terrify me — shipwrecks are not really my thing, which is probably why I've never been on a cruise — I just can't get past these shots of Hemsworth. So, before you contemplate the terrible tragedy of shipwreck and the eery thoughts of men killing and eating one another for survival, let's enjoy Chris Hemsworth on a ship.

With The Rising Sun Behind Him

Even the sun knows it's beauty is behind Hemsworth's.

What happens when weapons, wind machines, and great hair come together.

Look at that precision and that hair.

Running On The Deck

NO RUNNING ON THE SHIP — unless you're Chris Hemsworth.

By The Glow Of Candlelight

Is this live-action Beauty and the Beast or a thrilling tale of survival? I can't tell.

Superstition has come to life.

Shit just got real and yet the sun still knows its place.

There's a delicate ratio of hair volume to gun powder to achieve the perfect shot.

And Lastly, The Look of Perseverance

"The tragedy of the Essex is the story of men and a demon." The demon being whoever confined Hemsworth's locks.

Watch the full trailer for In The Heart Of The Sea here: