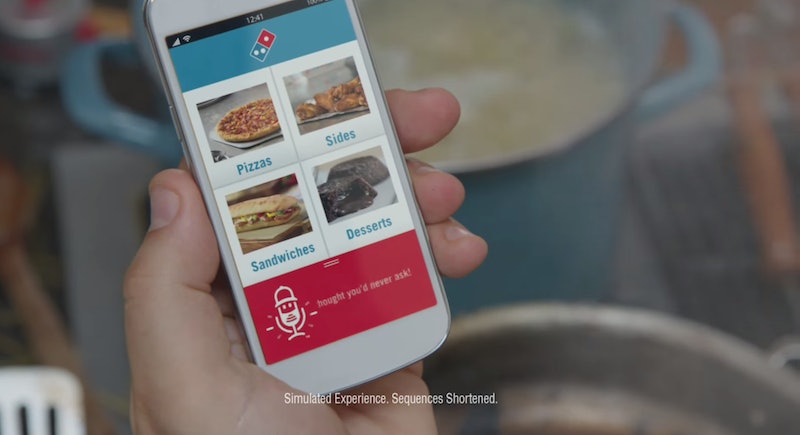 Have you ever asked Siri to teach you how to repair the zipper on your favorite, albeit busted pair of jeans… but secretly wished she'd just say “I don’t understand. But I’ll make it up to you. I’m ordering you a pizza”? I feel that. And Domino’s feels that. A new TV spot for the pizza chain introduces the world to Dom, the ‘za-lovin’ robo-assistant. No, the Domino’s app's voice-ordering feature can’t answer “What is the largest Canadian province?”, but Dom can summon pizza.

Yup, this means any human with an Android or iPhone can order a pie pretty much the same way he or she would solve a math problem. (Who bothers tapping the buttons on the calculator app anymore when you can bark commands at the robot who lives inside of your cell phone, amirite?) And here I thought the Pizza Tracker was the pinnacle of pizza technology!

Perhaps you have questions about Dom. Here are some answers to the questions you may or may not have about Dom:

If you’re going to talk at your phone to order a pizza, why not call a Domino’s store and just place an order with a human? Isn’t it essentially the same thing?

No, it’s not the same thing. The future is now, and talking to robots is what the future is all about. Carry on the Jetson family's legacy.

Than what? Looking up the Domino’s number, dialing that number, waiting for someone at the Domino’s pizza depot to pick up the phone, placing the order, and then reading off your credit card information?

Yeah, I’d say pressing one button and saying “ONE LARGE SAUSAGE PIZZA” is both easier and breezier.

Why not just ask Siri to order you a pizza?

LOLOLOLOL. Have you ever tried doing that? I have. She never simply orders a pizza when you say “Order a cheese pizza.” She just lists a bunch of nearby pizzerias instead.

Are Dom and Siri friends?

Uh, I don't know. You'd have to ask Siri. But based on what I know about Siri, I predict her answer will be frustratingly cagey.

Will Dom judge me if I order pizza more than once a week?

No. Dom is wicked chill. Judging you is not in his programming.