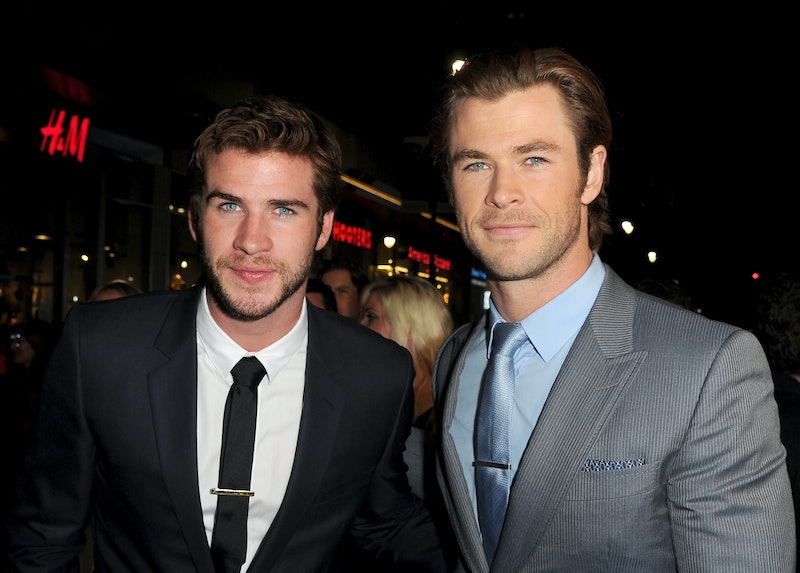 Quick! What’s your first response when this question comes to mind — keep in mind, this question's going to say a lot about you and your character and possibly your future children and their children's future children — which Hemsworth brother do you identify with, Liam Hemsworth or Chris Hemsworth? OK, that might’ve been a little unfair to bombard you with so abruptly, so let’s ease into this, because as much as we all love Gale from The Hunger Games and Thor from The Avengers, we’re dividing into teams now. It’s sort of like picking your Sex in the City character: are you a Miranda or are you a Carrie? Some nights you're such a Samantha or maybe you'll say something that's so Charlotte.

So what do you think? Are you a Liam or are you a Chris? To make it even more difficult, have you even considered if you are their eldest brother Luke Hemsworth? Now, don’t panic, we’re going to help you see which Hemsworth you are by answering a few science-worthy — Hemsworthy if you will — questions. It's a certified (JK, no it's not) way to tell, because inquiring minds want to know.

Can You Contain Your Hips?

If yes, then you are definitely Chris. Early on in his career, the Thor star was a contestant on Dancing with the Stars Australia. His hips do not lie.

Do You Identify with Sliced Bread?

It's OK if you do. It means that you're oozing with confidence, power, and probably taste delicious slathered in peanut butter. It also means you're a Liam, who got as big as sliced bread after The Hunger Games was released.

Do you Love Tom Hiddleston?

I know, this might not be a fair question to ask, because who doesn't love Tom Hiddleston, but if you love Tom Hiddleston and are willing to claim it at the top of your lungs — or with a sign on your head — then you just might be a Chris.

Are You Adverse to Hosing Off?

Yes, this is exactly how you want a date to end, right? Because who needs lufas and bath gels when all you really need is a garden hose and the mood to strike? If you can relate, that means you're a Liam.

Do You Always Need Coffee?

Maybe you need it to start your morning. Maybe you just love the taste. Either way, if you're a coffee junkie then you just might be a Chris. Well, technically, you're probably more like Thor... or are just a normal human.

Are You in Touch with Your Sensitive Side?

If so, you might be a Liam because you have to be able to dig deep into those emotional feels to star in films like The Last Song and music videos like the Zac Brown Band's "Cold Weather."

Are You Cutting Edge on Fashion Trends?

Like Chris, you're so cutting edge that normal things you do, like, say, putting your golden locks into a man pony or a man bun gets picked up a fashion trend. You, like him, just naturally werk it.

If yes, then you are more like Liam, who uses his Twitter account to talk about philanthropy and his work with the Australian Childhood Foundation. If not, then you're like Chris and probably think your Myspace is still where it's at.

Do You Hold a Grudge?

Like, from childhood? Because you just might be Chris. Granted this video was a spoof for Jimmy Kimmel Live! but as a youngest sibling, I can tell you that some incidental things Young Me did to my older siblings still have some lingering resentment.

So how did you fare? Are you a Chris or a Liam? And don't forget the third Hemsworth! Didn't relate to any of these? You just might be a Luke. No matter who you got, just thank your genetics, because you're still dapper, scruffy, and leading man-worthy.