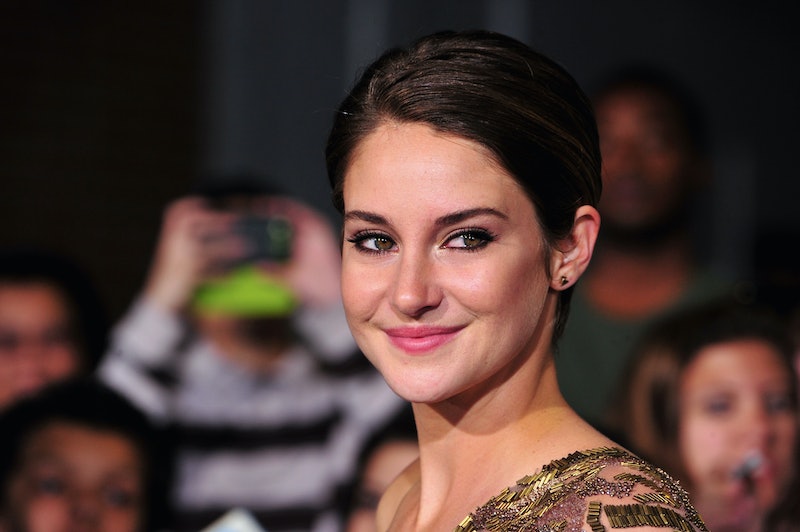 Hollywood's favorite hippie was showing off some serious steps last night. During her appearance on The Tonight Show, Shailene Woodley taught Jimmy Fallon some sweet goth dance moves. Yes, you read that correctly. Apparently, Woodley plays "kind of a goth character" in her upcoming film, White Bird in a Blizzard, which means I'm already pretty much sold on the movie. In intense preparation for this role, she had to learn how to dance in a goth club.

Now, I could've taught her how to do that from my nights (that is, literally three nights) dancing at goth clubs in Philly (R.I.P. Nocturne) but instead, her director was kind enough to send over some video tutorials. What happens next is magic.

Woodley breaks out some of the most patented goth dance moves, including "Clearing the Cobwebs," a languid gesticulation of the arms and fingers. I have to say I'm proud, because it appears she's definitely mastered these skills with grace. Fallon, a novice, still needs some work (it's all about the making your fingers loose, like you're summoning dark forces from the underworld). She also showcases "Stepping Over The Dead Body," which of course works best when combined with "Clearing the Cobwebs." "This is how I walk to work every day," says Fallon. Don't we all?

I'm sure that all seems silly to you normal folk, but rest assured that's just a fraction of different steps and tricks when it comes to goth dancing. Who can forget some of these other sweet goth dance moves such as...

It's simple! You keep your eyes on the floor and your hands at your side, and every 3 seconds take a drag of your cigarette. Definitely the best way to express all your pain and suffering. And I can't assert this enough, the occasional hair flip is SO important. And what about...

Confuse all the other 10th graders at homecoming dance with a despondent move that unleashes all the anguish in your soul. Nothing screams "I don't know, mom, I think I'm too depressed to go to Spencer's Gifts today" like this. And how about...

Break it down like the original goth girl, swinging your arms back and forth, shimming in one spot. Truthfully all these moves are reliant on either wild arm swaying or zero arm movement. And to finish it off...

Twirl wildly as if it's the only way to release the suffering of having to wear pink to grandma's birthday party! Twirl as you're bathing in a rainstorm of Robert Smith's tears!

Anyway, I don't know about you, but l'll be catching an immediate screening of White Bird in a Blizzard to check if all these are properly represented. Until then, I commend Woodley for bringing a little taste of goth culture to our living rooms. I'll meet you later at the club, I'll bring the absinthe.