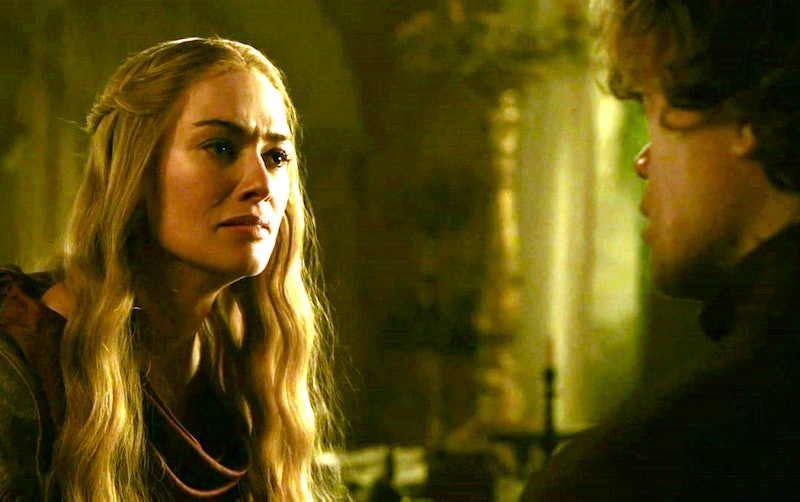 It's been suspected for some time, but now it's officially official: Game Of Thrones Season 5 will take us to the past, at least intermittently. Prepare yourselves for Lost comparisons, and an uncomfortable intimacy with what made Cersei so... Cersei. It'll certainly be a shake-up for the show's format, but it's probably the best thing they've done in a while for their characters.

There's a lot that gets lost in translation in the adaptation from stage to screen — especially with books as massive as A Song Of Ice And Fire. One of those things is a lack of time spent really sitting with a character, allowing them to take us back through their memories and everything that led them to all of the incredibly questionable decisions we see them making in the present tense. There's a lot of backstory in the Song Of Ice And Fire books that we never see, basically — a lot of details that round these characters out.

Occasional monologues and coded hints help with that in the show, of course, and showrunners David Benioff and D.B. Weiss have talked before about their initial policy of "No prophecies, dreams, or flashbacks." They've already been systematically breaking those rules, so it's no surprise they're finally biting the bullet and allowing flashbacks to seep through. Considering how vast and meaty the history of Westeros is, actually seeing it could carve out a whole new terrain for the show as it continues to age. Gotta keep it fresh when the books haven't even ended yet and may stretch on into eternity.

As for who we'll be seeing in these flashbacks? It's rumored they've already cast Young Cersei, so we'll no doubt get a little bit more of that effed-up backstory. Other things we'd like flashbacks for, please: Back when the Starks were happy, Nymeria doing some dragon-riding, Hodor. Always Hodor.