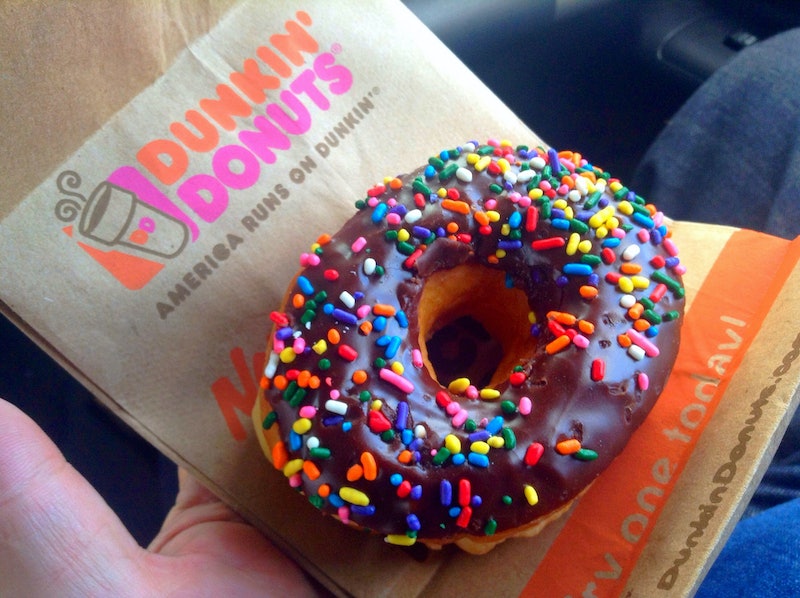 Being from Rhode Island, I grew up surrounded by esteemed and fabulous eatery to the stars (probably), Dunkin' Donuts. The only thing we had more of in Providence than Dunkin' Donuts locations were people dropping their Rs when they said "car". Get it?! ACCENT HUMOR! Anyway, as a kid, I dug Dunkin' (though I did not, as the commercials would have you believe, run on it) for its copious and varied donuts. True story: When I discovered that you could DUNK your donut in the drink of your choosing (for me, at the time, that was milk), I cackled with delight. Another true story: I was so passionately addicted to chocolate donut holes as a child that once, during church, entrusted with a box for coffee hour after the service, I popped a hole in the bottom of the box and quietly stuffed my face until I threw up what looked like medieval era black humors all over myself and several other parishioners. The point is, I have always taken donuts very, very seriously, and still do.

I go into Dunkin' Donuts not as often now. That's partially because there are fewer of them where I live now, and partially because if I went into them as often as I'd like to, my roommate would be forced to roll me from one room of the house to the next as I would be too obese and lethargic to move myself, and I feel like that would be awkward for both of us. But when I do go inside this blessed establishment, here are 12 thoughts I've had – and I'm sure I'm not alone in this weirdness.

1. How Many Donut Holes Equal One Donut?

Every so often, I struggle with my faulty grasps on both reality and basic math. A great example of this is when I decide it is better to ingest countless donut holes rather than buy one donut and eat it. The logic there being, "It's a donut hole! You'd have to eat, like, eighty of these to even equal one donut." Friends, this is not even remotely true. But let's pretend it is and glut ourselves with their sweet, sweet mana until we hurl, shall we?

2. I Should Change My Middle Name to Coolatta

Who doesn't love a Coolatta?! Fruit, coffee...it's all good! Granted, after drinking my weight in them time and time again while in high school, I haven't partaken of one lately, but to me even the word carries a certain caché that I wouldn't mind making a permanent part of my personal brand: Rebecca "Coolatta" Stokes. I can dig it.

3. Who Even Eats Whole Wheat Bagels?

You show up and all you want is an everything bagel. That's it. Nice and simple. But there isn't an everything to be had. Fine, you'll go onion. No onion? Um, sesame? No? CINNAMON RAISIN MAYBE? WHAT DO YOU MEAN YOU ONLY HAVE WHOLE WHEAT BAGELS? WHAT MONSTER COMES IN HERE LOOKING FOR THE HEARTY GOODNESS OF PURE GRAINS? (Answer: No one. That's why they are still there.)

4. What Does "Regular Coffee" Even Mean?

When you order a "regular" coffee, that could mean anything – depending on what part of the country you're in. I'm from Rhode Island. If you order a regular coffee there, you are getting a large coffee loaded with cream and sugar. I live in New York now, and if you order a regular here, you will most likely get an awkward tussle over what the hell you are talking about. Fun times abound.

5. How to Say Croissant

If you go up the counter and say it with its proper French accent, you risk sounding like the douche putting on airs in the DD. But if you get up there and full on commit to the American "crah-sahnt" pronunciation you run the risk of being viewed as being too low brow. But in the end, you're still going to enjoy a delicious, massive, buttery pastry, so whatever.

A Boston Creme, replete with chocolate, sugar, grease, and custard is a joy like few other things. It's not orgasmic (I mean, maybe if you put it in the right place?), but it's pretty close. Still, those of us willing to surrender to its bliss do so with a few qualms: You have to wait to eat it until you get home for fear of strangers seeing you unhinge your jaw to swallow it whole. But if you do that, you run the risk of the paper wrapper peeling off all the chocolate frosting. #WhyGod #HardLifeChoices

What I love above ordering a bagel toasted with butter at DD is that more often than not, I am not responsible for applying the butter to the bagel. You know what that means? I can, without reservation, eat a bagel so well-buttered that it leaves a translucent sheen around my mouth without hesitation because I had nothing to do with putting that butter on there, and thus, cannot be held accountable for the hedonistic atrocities entering my gob. If there's anything I love more than a heart-clogging amount of butter, it's the liberating shirking of accountability.

8. Sausage Patties: What Are They?

Never in a million years would any meat-eater worse their salt look down their noses at a patty of sausage. But every so often we find ourselves wondering (as our teeth land squarely on a fragment of gristle) what, exactly is inside these savory splendors? Then our blood runs cold as we consider the option. Don't think about the patty: Just eat it.

9. There Should Be a Chocolate Chip Muffin Sandwich

Chocolate chip muffins are the best thing in the Dunkin' Donuts menu. I'm not going to beat about the bush with this one. Disagree if you want; it's totally your choice if you want to be wrong. Sure, their bottom halves are worthless (as is the way of all muffins) but their tops?! Forget it. Melty chocolate chips, soothing vanilla cake (yes, cake can soothe) and those giant crunchy sugar crystals? PERFECTION. The only way to make them better would be by sandwiching two muffin tops around a wedge of brownie glued to the muffin on either side by marshmallow paste. I know. I'm a genius. Send muffins.

10. There Is No Way They are Going to Spell My Name Right

My name, Rebecca, is not that challenging to spell. That said, it does have its variations – Rebekah, Rebekka, Becki. But you know what is not a variation of Rebecca? Errol. Errol is in no way my name, or the name of any female human being currently, you know, alive. If Starbucks can figure it out, you can DD.

There's been a push in this modern age of ours to make work uniforms less horrific. Dunkin' Donuts has not subscribed to modernization and for that, I respect them. Every time I walk into one of their establishments to see an otherwise attractive human being wearing concrete colored boot-cut slacks, a maroon shirt, and a visor that would make Satan cringe, I silently nod at the seriousness with which DD takes what they do: There is no time for sexiness here, only time to make the donuts.

12. What Do They Do With the Extra Food at The End of The Day?

I don't know what their policy is about leftovers when they close shop each night. It's something I could look into. Some bakeries donate theirs to homeless shelters or food banks, which is pretty awesome. But that's not always realistic sometimes. I secretly hope that if they can't be baller charitable givers that instead there is just some 18-year-old going home to his bros and being all "DID SOMEONE SAY "DONUT PARTY"!?" and then straight-up backing a dump truck of donuts into their kitchen while they all freak out with glee. Daily.