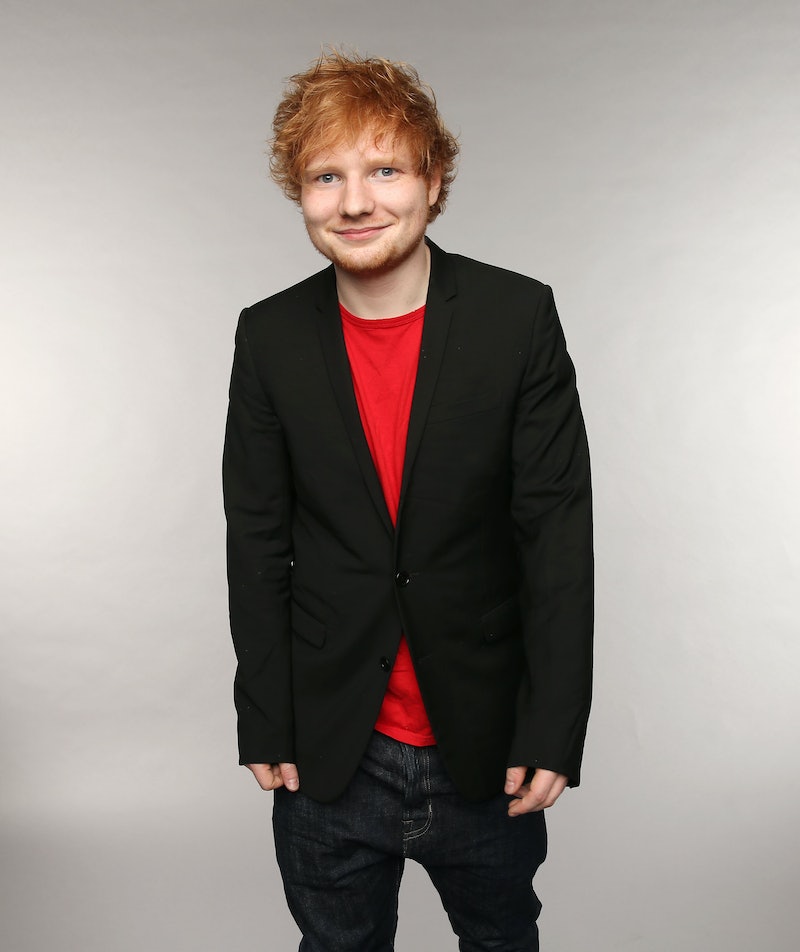 Ed Sheeran just looks like a total pal, doesn't he? Like the type of dude you'd call when you were really down and he'd just show up at your apartment with his guitar, some Taco Bell, and his shoulder to cry on. Because he's not only incredibly talented, but super sensitive, too. Anyway, if you didn't know, Sheeran is friends with both Courteney Cox and Jennifer Aniston, and I'm sure he acts just that awesome with them. And yes, I'm just as jealous as you are, because it seems like the greatest friendship in the entire world.

Actually, Sheeran confirms that assumption and let's us feel justified in our lifetime long obsession with the Friends alums. He let's us know Cox and Aniston are every bit as wonderful as we thought they were. The singer told the Daily Mail, "[Cox is] really normal. She’s from Alabama, so it’s bred into her, but everyone she surrounds herself with is the same. Jennifer Aniston’s just as friendly. I’d only ever experienced the darker side of Hollywood and they give you faith in everything." No, Ed, you give us faith in everything. Including our infatuation with celebs who we've never met but who feel like besties in our hearts.

The more I think about the unique, adorbs friendship between the Friends gals and Sheeran, the more I wonder what they do when they hang. Like, does he play them songs? Tell them silly anecdotes about baking mishaps with Taylor Swift? I don't know, but I think they might do things like these...

You try to stay still during "Sing," just try it.

FIGHTING OVER BEING ED'S PLUS ONE TO A BUDDY'S WEDDING

Just because they're sweet doesn't mean they aren't competitive.

BEING AMUSED BY HIS BRITISHNESS

We call it hell.

BONDING OVER BEING GINGERS

SAY YES TO THE DRESS MARATHONS

Ed knows how to help them through their frustrations.

I mean, when someone lets you live in their house, you go the extra mile.

From one unruly haired person to another, he understands that rainy days are better spent indoors.