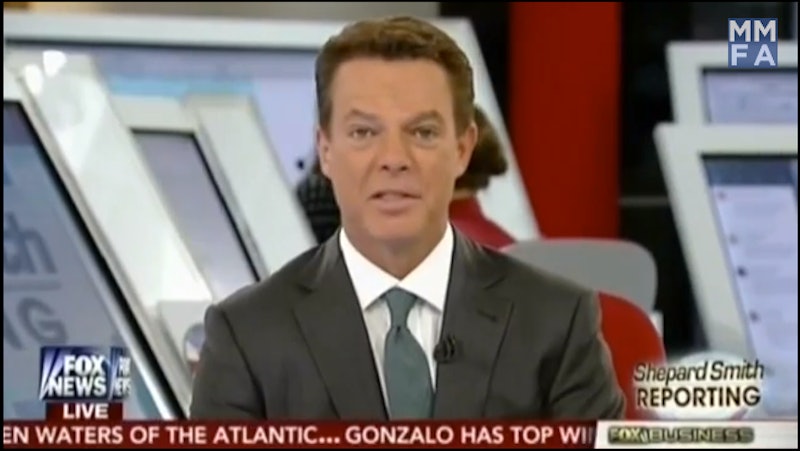 It's reaching epidemic levels in the U.S.! No, we're not talking about Ebola, but rather, the fear and anxiety stemming from it. The constant coverage is stoking fears well out or proportion to the reality of the outbreak. Surprisingly, one outlet who's taking a stand against this fear-mongering is Fox News. As other conservatives outlets contribute to the anxiety, Fox News anchor Shepard Smith gave a calming message about Ebola, reminding us that there is no outbreak in the U.S., so don't listen to all the hype.

Why is this so surprising? Well, for one, Fox News doesn't exactly have a reputation for sensible reporting, and have been responsible for its own fear-mongering. Secondly, conservative media in general is usually the culprit behind panic-inducing reports and exploiting fear, usually in the name of some political agenda. In fact, that's also one of Smith's main points — there's always politics involved, even in Ebola reporting.

But his main message is this: Calm down. There is absolutely no need to panic, because there is not even close to an Ebola outbreak in the U.S. So far, there have been three confirmed cases of Ebola diagnoses in the country — that does not an outbreak make. I'll turn the mic over to Smith, who, in his velvety-soft voice, will make you feel a lot better about this whole Ebola thing.

Listen to Me, Not the Hysteria

In telling us not to be scared, Smith throws in his own personal promise, like he's everyone's level-headed dad tucking them in at night and saying, "Everything's going to be OK."

Given what we know today, you should have no concerns at all about Ebola. None. I promise.

And the only time you do have cause for panic?

Unless a medical professional has contacted you personally and told you of some sort of possible exposure, fear not.

And above all, do not listen to the frenzied reports that suggest an imminent apocalypse.

Do not listen to the hysterical voices on the radio and television or read the fear-provoking words online. The people who say and write hysterical things are being very irresponsible.

The Facts on Ebola

Smith gives a clear and concise account of what's happened so far in the U.S., starting with Thomas Eric Duncan, emphasizing that he was showing symptoms.

A man contracted Ebola overseas. Tragically, he was dying in a Texas hospital. He was the most contagious while showing the most severe symptoms — that's how Ebola works.

Smith continues to lay out the timeline of events, and states that other healthcare workers will likely be diagnosed with the disease.

Smith makes sure to quell any concerns over Amber Vinson's flight from Cleveland to Dallas.

Where there is widespread fear, there is usually a political agenda not too far behind, Smith reminds us.

In the middle of all of this, you have to remember that there is politics in the mix. With midterm elections coming, the party in charge needs to appear to be effectively leading; the party out of power needs to show that there is a lack of leadership.... For the purpose of this fact-dissemination exercise, those matters are immaterial.

The words "Ebola outbreak" should not even be uttered in the same sentence as "the U.S."

We do not have an outbreak of Ebola in the United States, nowhere.... There is no information to suggest that the virus has spread to the general population in America.

If you consider the reality of the Ebola situation, which is very contained and low-risk, then being as scared as people are seems silly.

I report to you with certainty this afternoon that being afraid is the wrong thing to do. "Being petrified" (and that's a quote) is ridiculous.

As proof of the counterproductive nature of being scared, Smith mentions the stock markets, which have tanked as a result of the fear, and children who are now staying home from school.

Actually, There Is an Illness You Should Be Aware Of

The flu. That's right, stop thinking about Ebola and go get your flu shot.

Wow, that's much higher number than the 4,500 that Ebola has killed in West Africa. And how many did it kill in America? One.