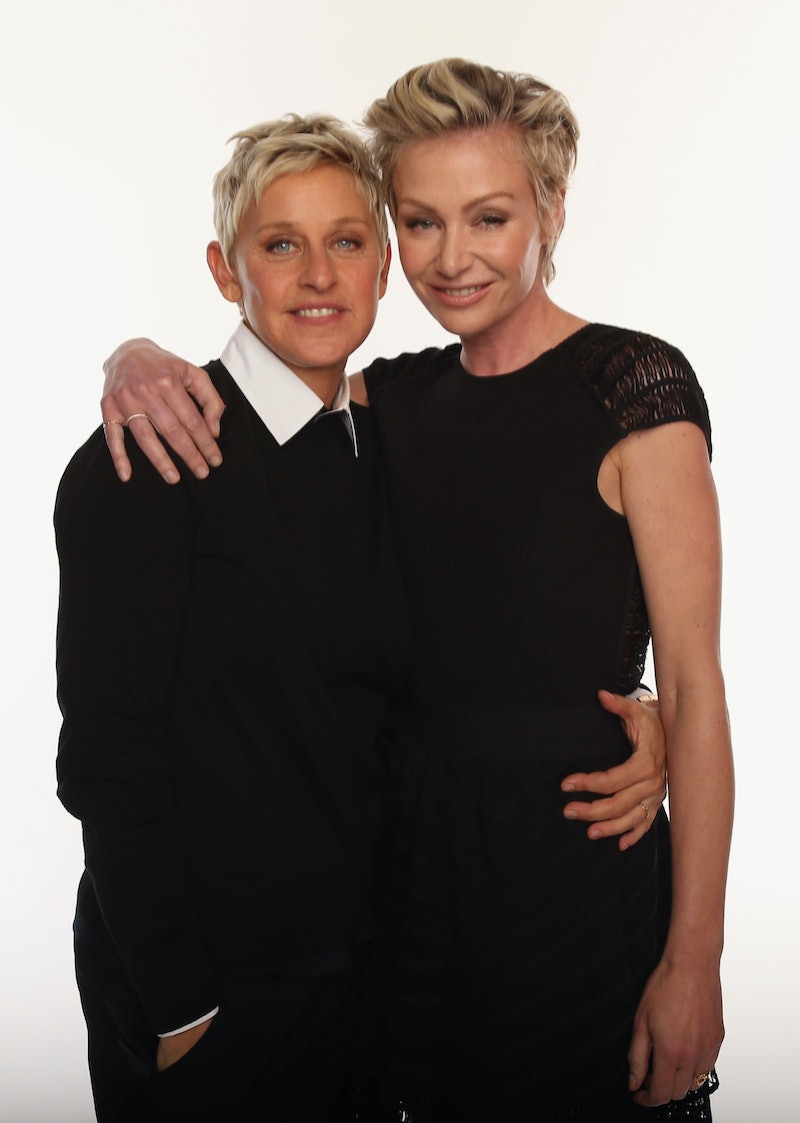 Portia de Rossi was a guest on Jimmy Kimmel Live! on Thursday and host Jimmy Kimmel asked the actress about the near constant rumor that plagues her: the speculation that de Rossi and wife Ellen DeGeneres are having a baby. Most of us are used to getting pressure from our family about our personal lives, but de Rossi seems to be feeling it even more. She told Kimmel, "And at this point, I feel like I'm disappointing the whole of America — not just my mother." She added that she and DeGeneres are happy just being aunts to their two nieces.

Kimmel asked de Rossi if her nieces thought of her as a "cool aunt" since she is a famous actress and she jokingly responded, "One of them, the younger one, she seems to think that I'm great right now, and I'm going to enjoy that for the next couple years."

What about Aunt Ellen? What do the girls think about DeGeneres? de Rossi said about her oldest niece, "She's five, so she realizes that the other aunt — Ellen — there's a lot of perks that go along with that. There's free stuff, there's 'meet the pop star that she wants to meet,' 12 days of giveaways, obviously... She's a pretty good aunt to have. They watch her show every day, so they've wised-up now."

Well that all makes me a little bit jealous. Parents are great and all, but aunts can do all the fun stuff that parents can't without all the seriousness of discipline. de Rossi and DeGeneres should not feel the pressure to be parents. They already have children in their lives and seem to be very happy. I bet those nieces are happy too. I can just imagine what it would be like being spoiled by two celebrity aunts. It would be my dream come true. There are so many reasons that these two would be amazing aunts.

They Are Not Parents

Since the couple does not have kids of their own, they are not used to thinking in mom mode. They don't have the same set of worries that mothers have and they can overlook a lot of things without realizing it. As a niece, it would be ideal to have an aunt who doesn't care about how sugary my snacks are or if I miss my bedtime when I sleepover at her house for the weekend. The lack of discipline would be refreshing every once in a while.

Why would I want to spend time with aunts if they were boring? Ellen DeGeneres is a comedic genius and she is always finding the next big viral sensation and bringing everyday people on her show as guests. She would always keep me in the know about what's going to be the talked about video or story in entertainment news. Portia de Rossi is also hilarious and a great actress, and probably has some great stories from set to tell her nieces.

DeGeneres has a daily talk show. This means that she meets actors and singers all the time. If I was her niece and wanted to have someone cool perform at my birthday party, I could just text them from Aunt Ellen's phone. I could post Instagram photos of me and Selena Gomez backstage at the show. I would get so many double taps! de Rossi has been on some of the best TV shows and knows plenty of celebrities herself. It would be so cool to have aunts who could hook me up with some celebrity autographs and photo opportunities.

I mean come on, Ellen's last name is basically the word "generous." They could buy me so many presents. On top of that, as celebrities they have connections with many designers to get products before they hit the market. On top of that, in a paradox that I still don't understand, the more successful a star is, the more free things they get. As their niece, I would love to acquire the swag from their gift basket reject pile.

They both give a lot of themselves to their community and use their voices to stand up for causes that they believe in. On her talk show this week, DeGeneres dunked de Rossi in a tank to raise money for Breast Cancer research. They are both very active about gay rights. The couple has also been vegan together since 2008 and are involved with animal charities. Great role models for their nieces!