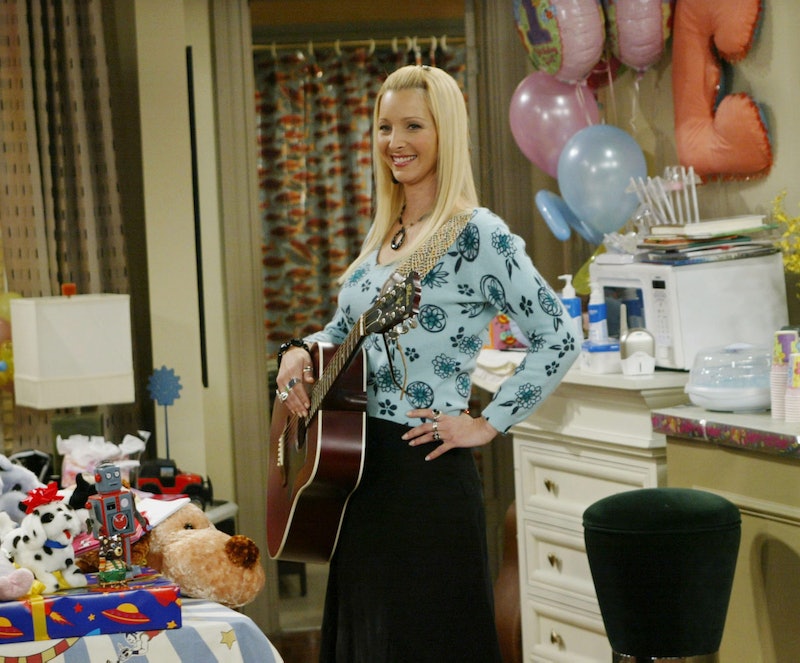 If you're still keeping up the facade that you haven't compared yourself to the Friends characters, I beg of you to let it go. Everyone has. I know, without a doubt, that I am the Phoebe of my group of friends. I'd love to earnestly claim that I'm the Chandler, but my passion for both aromatherapy and rotund cats supersedes my passion for even sarcasm. So Phoebe it is.

When I meet people, I make a concerted effort to be exceptionally open-minded. Everyone is different — you never know what to expect when you meet someone new. They could surprise you! That guy who you thought might be a serial killer could turn out to be a world-renowned heart surgeon or whatever! That said, I still almost automatically assign them a Friends persona because in my heart, it will always be the '90s, and I make no apologies for that.

It took me a while to deduce that I was Phoebe. If you're on the fence, or someone you know is in deep denial as to their Phoebe-ness, here are 12 things that might convince them otherwise. It's good to be Phoebe — it means you get to make out with Paul Rudd! What's not to love about that?! Absolutely nothing, guys. Absolutely nothing.

1. You See No Problem With a Little Ass-Grab Between Friends

If you, like me, have more than once looked at your friends of either gender and been all "Break me off a piece of THAT!" or "I'll have what SHE'S having!," you are the Phoebe. Also, if you've ever asked to squeeze a friends boobs "just to see," this is also a sign.

2. You're Vocal About Your Feelings

I might not play the guitar, but you can bet if I did, I'd spend most of my time working out over-wrought monologues about the latest way some dude had wrecked my soul. But since I don't play the guitar, I blog about it, which is also good. Phoebe would probably blog if Friends was set in 2014. Phoebe lets the feelings out in spite of what the haters might think.

3. You Miiiiight Be Just Slightly Dramatic

A friend sends around a photo of their new baby doing something adorable. Everyone else sends back something along the lines of "awwww, cute." You're the last one to reply, because you had to drive to a cemetery, pose on a grave, and send the photo of said pose to everyone along with the caption: "DEAD FROM THE CUTE."

4. Nobody Ever Lets You Drive

I did not get my driver's license until I was 30. I happen to think I am an excellent driver with incredible skills. Every person who has ever been in a car with me might think otherwise. That's just fine. I know I'm baller behind the wheel. Plus, like, why stop at a red light if you KNOW no one's coming the other way?

If you're deeply in love with your cat and have also regularly inspected his butthole in case he left some fecal matter on it just straight chilling and thought nothing out of the ordinary about this, you are so Pheebs. If you don't even have a cat but sing about them, you're also Phoebe.

Because your other friends are usually so stressed out and high-strung, you can easily be mistakenly considered the laid-back one of the group. Try telling that to your boyfriend when he hasn't called you back for OVER AN HOUR.

7. Confidence Isn't Something You Lack

You're not cocky, you're just confident. You're good at what you do and you do almost everything. It's not your fault we live in a society where girls are taught that self-deprecation is a way of life. Repeat after me: WE ARE AWESOME. Because we are.

8. You're Incredibly Quick With Jokes

If life had a live studio audience, your pithy one-liners would absolutely slay. Sure, people might think of you as the kooky one, but kooky and humorless are two very different things. You're dry and sarcastic and hilarious.

9. You Love Kids, But You Also Kind of Terrify Them

I love kids. Babies, toddlers, even truculent teens! But I am also very aware that, like Phoebe, they very often kind of don't know what to make of me. That's cool! Hopefully they will grow to see in me the strength and power that comes with being unabashedly yourself. That said, I spent a fair portion of yesterday explaining to a 3-month-old what an umbrella is, so it's not exactly like gems are falling from my lips every time I speak.

10. You'd Do Anything For Your Friends

Like Phoebe, I am not above crossing personal boundaries to help a friend. I haven't made out with any of mine (at least, not that I can currently recall) but if you have a piece of food in your teeth and you can't quite get at it no matter how much direction you get, I WILL reach into your mouth and I WILL remove that food particle in front of God and everyone.

You love hot people and hot people love you, but it's not exactly like you've got this whole seduction thing on lock. Luckily, even if you accidentally cough your gum into some hottie's face, they'll probably forgive you — because Phoebes own their awkwardness when it leaps up and tries to smack their love life in its face.

12. You Love an Audience

With confidence comes a natural love for performing in front of an audience. You're not always sure that they get you, but you pine for the applause — and for the vaguely puzzled expressions.