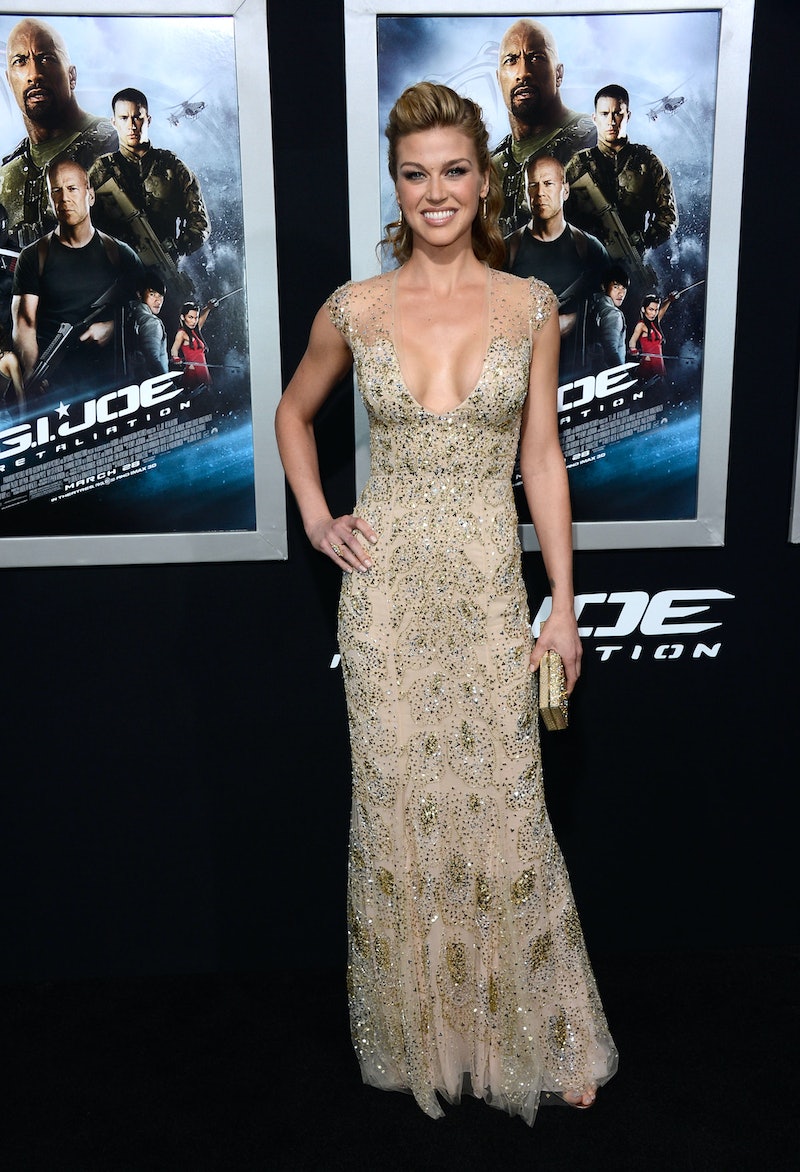 TV veteran Adrianne Palicki is no stranger to action. While she might have gotten her start on that glorious TV show about football that is not really about football — something you only understand once you have finished binging Friday Night Lights — she is slowly solidifying herself as a new go-to actress for taking names and kicking butt. Now Palicki is guest starring on Marvel's Agents of S.H.I.E.L.D. as Bobbi Morse, aka Barbara, aka Mockingbird. Though currently only slated to appear in one episode, cross your fingers that she shows up again before season's end — and not just because in Marvel comics, Bobbi is usually romantically linked to Hawkeye.

But before we meet the newest potential agent of S.H.I.E.L.D., let's go back to where Palicki's story began: Dillion, Texas. Yes, that's right, it's time for some Friday Night Lights appreciation of everyone's favorite underdog champion, Tyra Collette. Tyra has got it in her mind that she'll never amount to anything since her home life hasn't shown her otherwise. But then, the guardian angel that is Tami Taylor swoops in and shows Tyra her true potential. Don't you dare tell her she can't go to college.

I never thought I would cry during Friday Night Lights, and I tried very hard not to for a good long while. But then sometimes it's just easier to give in and let it all flow out. Tyra's college essay is the most beautiful tearjerker ever. This should always be the first thing that comes to mind when you think of Tyra, and the fact that she has worked so hard for what she wants and is well on her way to getting it. Surprisingly, there's no video of her reading the letter to her then-boyfriend Landry online. Weird, I know, because this is 2014 and you can watch puppies on livestreams. Anyway, read her essay below and then cry a little bit about believing in your dreams.

From believing in yourself to kicking butt

Palicki has also popped up in a few action movies, such as Legion and G.I. Joe Retaliation, and now has a tiny six-inch posable figure of herself — "pretty cool" indeed. One of those action movies was Red Dawn, which also starred Josh Hutcherson. Just another reason why she's cooler than me.

Way back before there was a surplus of comic books filling our TV screen, NBC tried to make a Wonder Woman TV show, with Palicki slated to star. It was produced by David E. Kelley, whose credits include Ally McBeal, The Practice, and Boston Legal, so it's safe to assume that it actually would have been a good show. I mean, a combination of the gritty realism of a procedural and the legend of Diana Prince? Sign me up. Too bad it never actually made it onto our television screens. In an interview with Crave Online, Palicki credited the series' sudden death to network politics. As far as I know — and trust me, I've looked — the pilot is nowhere online. Carey Elwes AND Pedro Pascal were also in the pilot.

Maybe it was because I had literally just finished binging Friday Night Lights, where Palicki is blonde, but I did not recognize her for the first five episodes of About A Boy. I thought she was Vanessa from Gossip Girl. That is a true story. I can't be the only one who saw that uncanny resemblance, right? For those not up to speed on About A Boy, Palicki' plays Dr. Sam, the girlfriend of David Walton's Will.

Currently the fate of their relationship is still up in the air on the show, but maybe if they break up she'll have more time to return to Agents of S.H.I.E.L.D. That might me the only way it's possible, because Palicki's television roster has more on it than my own TV viewing schedule — and that's saying something.