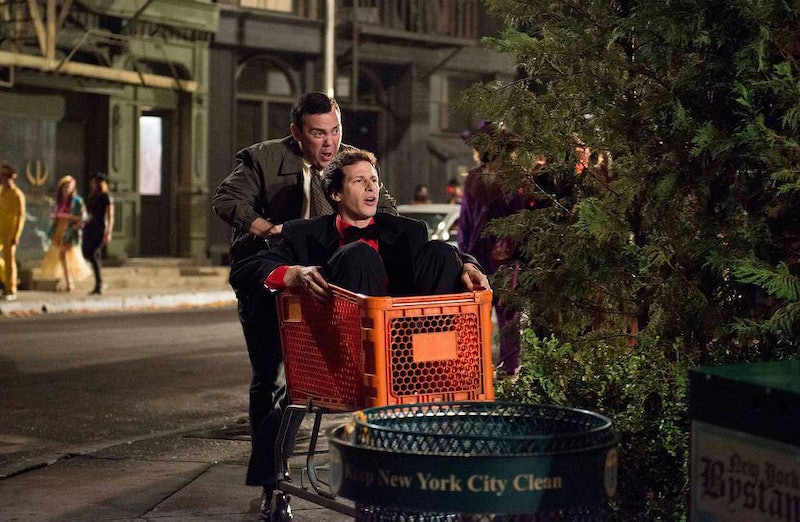 Good evening, boys and ghouls, to paraphrase Brooklyn Nine-Nine 's Charles during Sunday night's episode. Halloween has come early this year, and it has taken over Brooklyn's 99th Precinct. This episode has everything you need for a successful celebration of this spooky occasion: costumes, candy, and a good-old-fashioned Halloween bet.

Brooklyn Nine-Nine's sophomore attempt at a Halloween-themed episode yet again featured a bet between Jake and Captain Holt. To refresh your memory, the pair bet on whether Jake could steal Captain Holt's Medal of Valor from him before Halloween was over. After an elaborate heist, Jake was successful, and he won rare praise from Captain Holt, in addition to having his boss fill out his paperwork for a week. Not too shabby.

After last year's win, Jake was understandably feeling a little cocky. But let's be real. Jake would feel cocky whether or not he had lost the bet last Halloween. It's just his nature. So this year, he upped the ante. Jake bet that he could steal Captain Holt's precious watch before midnight on Halloween. If he was successful, Captain Holt would do his paperwork again for a week. If he failed, it was five weeks of working overtime for free from Jake.

Yet again, Jake orchestrated an elaborate scheme with the help of the whole team, complete with some opera from Scully, smoke from Terry, and a drone sloppily piloted by Amy. There was also a new addition to the team this time: Fingers, who had been twice arrested for pickpocketing. Fingers was the most important element of the heist, seamlessly sliding off Captain Holt's watch and replacing it with a new one without him batting an eyelash.

Less than 10 minutes of the episode was over, and Jake has already won the bet? Not so fast. It turned out Fingers swiped the watch, which was not really surprising considering that's just what the guy does. To add insult to injury, Jake found out that the watch belonged to the dead father of Captain Holt's husband Kevin.

By now, Jake realized this whole thing had gone too far, and he went on a crazy chase around town to try to get the watch back. After a series of mishaps, he just couldn't do it. He even ended up arrested after the whole thing. Talk about trick and no treat.

But once in custody, Captain Holt explained how after last Halloween, he was determined to best Jake. He spent a year planning his revenge on Jake, which included manipulating him into noticing his watch and getting the whole precinct to help in the prank. In the words of Captain Holt, bum bum buuuuum. But actually, I think we all saw this coming, which made watching the majority of the episode not that exciting.

When you end up doing a repeat of an episode from last season, it's automatically going to invite comparison. While this was certainly an enjoyable episode with a lot of chuckle-worthy lines in it (Thank you, Gina for, "I can't help it if my life is literally a Step Up movie."), this Halloween bet redux didn't live up to the magic of Brooklyn Nine-Nine's inaugural Halloween episode.

Not only did we get to see Jake and Captain Holt riff off of each other, which is one of the highlights of the series, but we also followed another dynamic duo who should really get more screen time together: Charles and Amy. There was a great B-plot in that episode, with the two of them running around arresting drunken, costumed perps on the street. Plus, we had the amazingly accurate line from Amy, "Halloween is Christmas for jerks." Seeing the enjoyment Jake and Captain Holt both get out of tormenting each other on this holiday it seem like that statement still holds true this year.