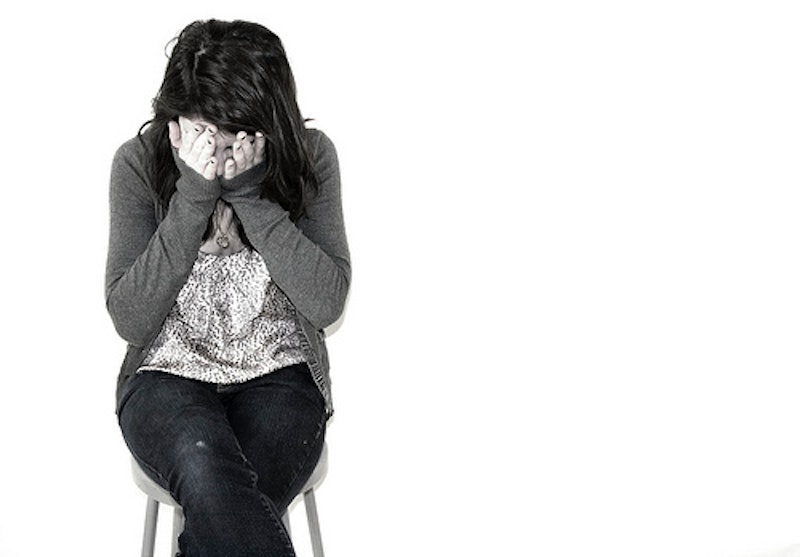 Sometimes, the Internet is so awesome. Like when it provides an opportunity and a space for someone to curate an incredible creative project. This time around, that someone is writer Megan Milks and the project is a tumblr that seeks to simultaneously emulate and update Seventeen magazine's famous embarrassing stories section, Traumarama. Inspired by her own short story that was in turn inspired by her fascination with Traumarama as a teen and tween, Milks' online collaborative project expands on the OMG-inducing confessional, while also opening the forum up to people who aren't usually represented in the pages of teen magazines; queer, disabled, transpeople, people of color, and more. I talked to Milks about her love for mortifying tales, humor, catharsis, and what happens when adults look back at their cringeworthy past.

BUSTLE: Can you tell me a little bit about your Traumarama project?

MEGAN MILKS: The project, which encompasses a short story and a tumblr, takes off from Seventeen magazine’s Traumarama section. For those who don’t know, Seventeen’s Traumarama was the hall of shame, where “real girls” wrote in to share their most humiliating moments. (It’s still alive, but I’m using past tense since I’m referring to my relationship to the section as an adolescent in the '90s.) I loved it because it reassured me that my messy, messy body and clumsy behaviors were “normal” (I was/am able-bodied, I should note).

Even so, while I did love the section, I read it the same way I read Seventeen overall: Assuming an image of the reader as white, thin, blonde, tan, perfect hair, skin, teeth, etc, conventionally feminine, not to mention straight — I mean, the illustrations almost uniformly represent skinny gender-normative white girls. While I did fit some of those categories, I was a fat kid and (partially but not only because I was fat) was never secure in my girl-ness. Seventeen was like this other language I was trying to translate myself into, and I just kept getting it wrong. While I loved reading the Traumarama section, my status as a girl was too questionable for me to ever confess to the kinds of moments it broadcast.

Well, now I’m a dyke — or, more comfortably, queer. When I arrived at Traumarama as a form I wanted to explore as a writer, I set out to viciously parody it. The Traumarama section, while functioning on the one hand as a radical space for collective TMI, on the other hand was this freakshow of female abjection that put men (“major hotties,” “my crush”) in the position of arbiter of shame. “This terrible thing happened to me…and a BOY saw it!” Life = over.

The parodic approach was a dead end, though — it’s too easy and expected to make fun of Seventeen — and anyway, part of me still really loved it. I shelved the story indefinitely. Then one night I couldn’t sleep, I was so down over some terrible thing I’d said to someone, and I found myself returning to this Traumarama piece and using it to make the experience funny and sympathetic and more tolerable to me as the executor of it. I stayed up for hours that night writing out all of the shame, all of the humiliation, claiming it and reconfiguring it through short, simple narratives. I found myself channeling other people’s stories, too, experiences that had been shared with me by friends and lovers, both funny-embarrassing and also some horrible maddening experiences that I had never been able to make sense of.

I decided my short story would focus on two main things: first, expanding and queering this form of the teen-mag confessional, and second, exploring the relationship (or distinction) between perhaps more innocuous experiences of shame and humiliation and more intense experiences of violation and assault — all of the things that Seventeen’s version leaves out. I started talking with people about the project, and I had some uncomfortable (for me) but crucial conversations with people about authorship and ownership and consent; about privacy and exposure; about modes of processing that do and don’t, or can’t, resolve in narrative catharsis. The piece became collaborative pretty organically at that point, with some people contributing their own experiences in their own words.

How do you expect the tumblr you've created to support your original collaborative short story?

The short story is oriented towards and around my specific communities, and as such has a community-centered feel. The tumblr is designed to broaden the scope of the collaboration, and basically see where people go with it. Seventeen Traumaramas were and are so formulaic and manufactured...which is both comforting and limiting; the goal of my project is to open up this form of the (usually funny, usually straight, white, cis-, able-bodied girl) confessional to other realms of experiences. I’m interested in seeing how people use, complicate, or discard that formula in telling “real”-er stories. Don’t get me wrong, though — it’s also fun to hear stories about diarrhea and tampons, and those are welcome as well.

I remember Traumarama in Seventeen mag as equal parts hilarious and cringe-inducing. Is that the same kind of vibe you're going for in your project?

Yes, sure! Basically whatever people are willing to share is what I’m looking for, so bring it on. The tumblr submissions I’ve gotten so far are mostly on the funny and cringe-inducing side, but several have been incredibly emotionally complicated and brave.

I haven't read a Traumarama (or really, any compilation of embarrassing stories) since I was a teenager. I wonder if submissions will be different if they come from adults remembering trauma from younger days, or adults recalling more recent traumatic or embarrassing experiences. What do you think?

Many of the stories I’ve gotten that are looking back on earlier experiences are looking back with a critical lens: that is, recognizing forms of shaming commonly mobilized in adolescence, such as fat-shaming, slut-shaming, homophobia. And many of those that are recalling more recent traumatic or embarrassing experiences are more interpersonally complicated than simply “this mortifying thing happened, and someone was there to see it.”

What do you hope to accomplish by opening up the Traumarama project to queer, trans, asexual, disabled, people of color, or members of other underrepresented groups?

Mainly I want to encourage submissions from folks who perhaps did not see themselves represented (or represented well) in teen-girl magazines, or in online confessionals geared largely towards white cis straight women. There is something problematic, I know, about lumping all these groups of people/identities together — there could easily be individual Traumarama-ish projects speaking to very specific kinds of shame, humiliation, and trauma associated with these distinct identities/experiences — certainly there already are. I think it’s important to recognize, however, the ways in which social oppression across the board functions as a traumarama machine: studies have shown that racism itself is a traumatic experience; the constant potentiality (not to mention the actuality) of sexual violence for many women and queer and trans people is chronically traumatic. And so on.

That said, I understand that there is something potentially exploitative about one person, especially a white, ablebodied person, inviting All of the Marginalized People to share moments of vulnerability. Those moments are fun when they’re fun; but sometimes they’re not fun — a lot of that is very private for people, and tumblr is not necessarily a safe space. We’ll see what happens. The tumblr is still in early stages. I would be excited to have collaborators who can reach other communities, or whose contributions might readjust or even transform the project — if you are reading this and are interested, please get in touch.

The original Traumarama is still running, but social media is one of the more popular ways to share embarrassing experiences these days. I have no problem tweeting the dumb things I do, especially if they're funny. But I can't say I see a lot of farting or menstruation stories in my Twitter feed, that's for sure. Do you think being able to share these kinds of experiences without revealing your identity is what makes Traumarama so cathartic?

Absolutely. This project joins a swell of online confessional projects, including PostSecret and Mansplained — I just found out about a periodandbonerstories tumblr today! There’re so many. I’m not sure what makes it cathartic for folks. For me, it’s cathartic to get it out, to frame it a particular way, to see that it’s being acknowledged and (in certain cases) possibly laughed with — but not at.

The Traumarama Tumblr is open for submissions!