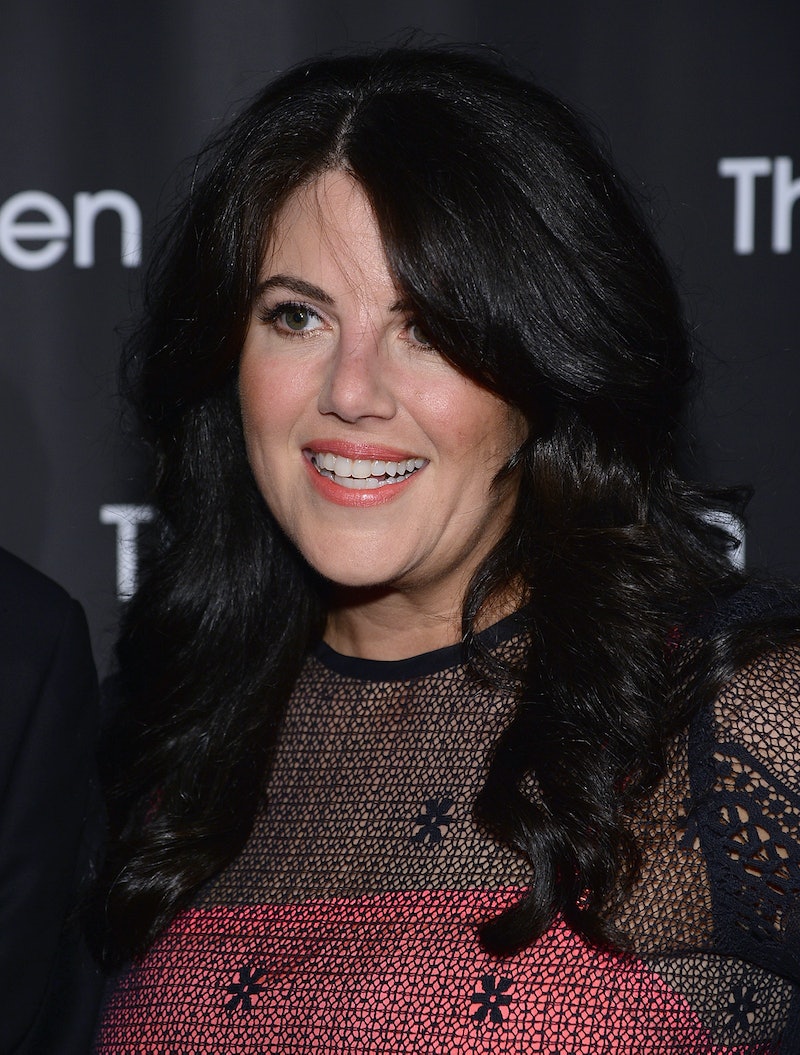 Several months after publishing a tell-all essay in Vanity Fair, Monica Lewinsky spoke publicly for the first time in 13 years on Monday, delivering a speech at the Forbes Under 30 Summit in Philadelphia. The former White House aid who endured years of media scrutiny — including a barrage of personal attacks from fledgling online bloggers — used the speech to introduce her newest venture: an anti-cyberbullying campaign. Knowing all too well the psychological harm caused by online harassment, Lewinsky, who calls herself the "Patient Zero" of cyberbullying, is making it her mission to help victims of online bullying — and to end the damaging practice altogether.

Let's take a trip back to 1998, where there was no Facebook and Silicon Valley was still affordable: The first outlet to break the Bill Clinton–Monica Lewinsky scandal was the Drudge Report, which was a little-known conservative gossip site at the time. Once the Drudge Report piece was published, the nascent online media relentlessly covered the Lewinsky scandal, arguably making it the first viral news story of the Internet age.

As Lewinsky told it in her speech:

Staring at the computer screen [after Drudge Report leaked the scandal], I spent the day shouting: ‘Oh, my God!’ and ‘I can’t believe they put that in’ or ‘That’s so out of context.' And those were the only thoughts that interrupted a relentless mantra in my head: ‘I want to die.’

Her painful experiences in the wake of the scandal, Starr Report, and the impeachment of Bill Clinton sparked a new calling in Lewinsky, who wishes to start a "cultural revolution" against the toxic online climate.

Before taking the stage at the Forbes summit, Lewinsky crafted her first tweet — ever. Yes, the woman who shied away from the social media age, with good reason, has embraced Twitter, creating her own account Monday morning. She already has nearly 13 thousand followers and a shiny blue check mark next to her name. Her first tweet said, simply, "#HereWeGo."

Here are some of the most powerful quotes from Lewinsky's Forbes speech...

1. On Being A Survivor

"Having survived myself, what I want to do now is help other victims of the shame game survive, too."

"What we need is a radical change in attitudes.... What we really need is a cultural revolution. Online we've got a compassion deficit."

3. On Not Backing Down

"[They said] Monica why don't you just shut up. Why don't you go away? ... And they will say it tomorrow and the day after that. They never shut up. The problem is that I believe in the power of story ... I believe my story can help. Help to do something to change the culture of humiliation we inhabit and inhabits us. I have been publicly silent for a decade, but now I must as, T.S. Eliot said, disturb the universe."

4. On The Infamous Affair

"I was in love with my boss in a 22-year-old sort of way. It happens. But my boss was the President of the United States. That probably happens less often. Now, I deeply regret it for many reasons, not for least of which people were hurt, and that's never okay."

5. On Picking Yourself Up And Being Part Of Change

"I have been publicly silent for a decade. I'd much rather be part of the solution."

More like this
The 10 Memes That Defined 2022
By Alexis Morillo
This AI Filter Shows How You’d Look In Different Time Periods
By Alexis Morillo
Here’s How To Find Your Spotify Wrapped
By Emma Lord and Emma Carey
Everything You Need To Know About Dabloons, TikTok’s New Currency
By Catharina Cheung
Get Even More From Bustle — Sign Up For The Newsletter