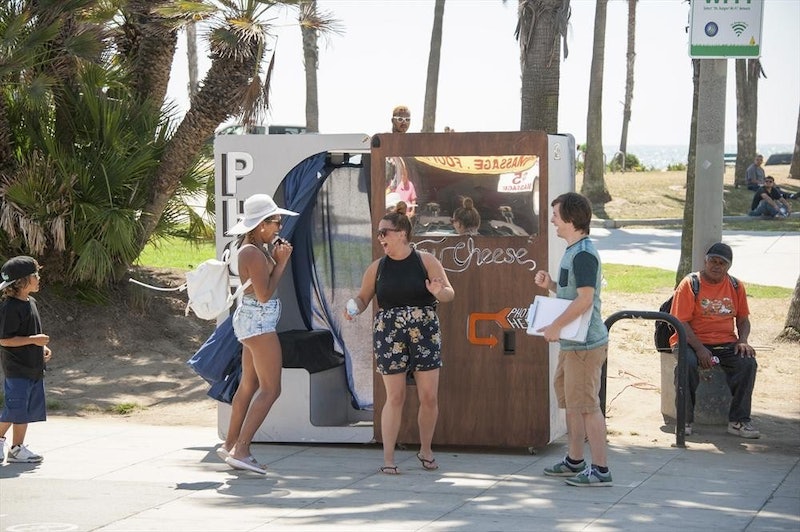 It's the season of spooks, which means everyone from your local radio station to screens big and small are revving up the scare factor on their programming. ABC Family's 13 Nights of Halloween is a time honored tradition of such seasonal programming, and this year they are shaking it up with a frightful new hidden camera show. But what's the scoop on Freak Out and does it have a host? The show comes to us via SallyAnn Salsano, creator of The Jersey Shore. The pitch for the show bears some resemblance to the Syfy Network show Scare Tactics , originally hosted by Shannon Doherty and later Tracy Morgan, promising to unite people with their greatest fears through the use of some professional film and TV effects. But it doesn't seem that there's a wacky actor to guide us through.

In promotion for the show, the network says that unsuspecting victims will die "sclaughing (scare laughing)". Some of the horror movie scenarios that come to life include a psycho killer stalking a dinner party, a woman's hair falling out during a salon appointment, and a gruesome prank where a man discovers a woman is pregnant with a host of creepy crawlies. All pretty standard fright fare, but is there anyone at the helm?

This is where the show bucks tradition in the realm of hidden camera shows. All of the current press releases and statements about the show neglect to mention a host, and instead emphasize the special effects group effort that goes into the pranks, including "elaborate special effects, intricate makeup, twisted actors and multiple cameras capturing the scenario from every angle."

Most shows bank on a personality to helm the reigns of a show like this, be they recognizable actors or professional hosts, like Howie Mandell's Deal With It, but if that were the case with Freak Out, it seems ABC would lead with that announcement instead of focusing on the creative team behind it. Given producer Salsano's comfort in the reality genre, it seems as though they are allowing the marks' friends and family dive into being the stars of the episodes and do the big reveal and post-wrap portion with them, which is a pretty nifty turn on the hidden camera genre. Besides, wouldn't you rather see the victim react to the person who set them up than the host they never met prior?