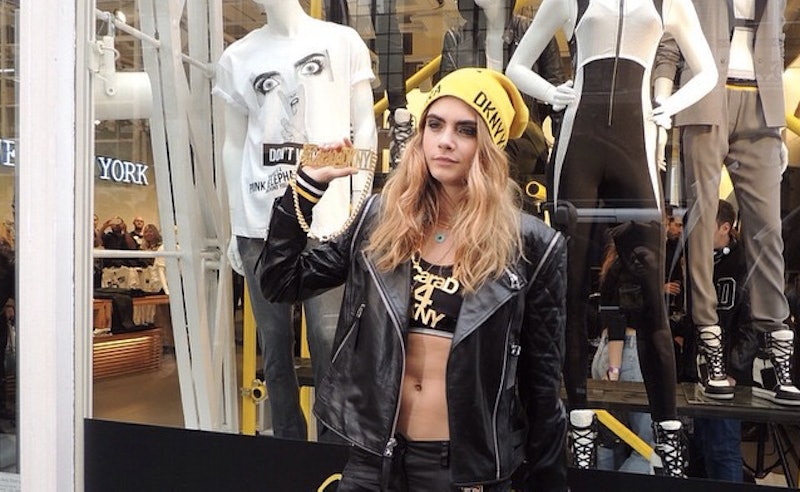 Scavenger hunts are a bit more fun when there’s a supermodel involved. This weekend, Cara Delevingne hit the streets of London to promote her Cara D For DKNY Capsule Collection. How exactly did it work? Both Delevingne and the DKNY PR girl tweeted hints of where she was and send fans running around London in hopes of finding her. It’s like a giant game of hide-and-seek for grown ups!

So, where exactly did she end up? Delevingne went to and from British department stores, including Harrod’s, Harvey Nichols, Selfridges, and the London DKNY store. In true Cara D fashion, the stops included dancing at a DJ party hosted at Selfridges and sticking her tongue out in selfies with fans.

This whole game really makes me wish I was British. After all, who wouldn’t want to chase a supermodel around of the streets of London? As fun as the whole scavenger hunt seemed to be, it looks like Cara Delevingne and DKNY skipped a few places. What would happen if instead of hitting up the British department store, Delevingne visited London’s most well-known tourist destinations? Here are five places she should have stopped at — and the riddles to help her fans get there. London’s obviously calling.

The Parent Trap house. Yes — it’s in London. Yes — we can pretend Delevingne has a long-lost identical twin.

2. The Closest We’ll Ever Get To Becoming Royal

Maybe Cara Delevingne and Kate Moss can chat it up at Buckingham Palace and make plans to collaborate on a new line?

3. You’ll Take A Photo At This Crosswalk… And Try Not To Get Hit By Oncoming Traffic

Let’s all take a minute to imagine Delevingne leading an Abbey Road photo.

4. Fergie Sang A Song About It… But That’s Not What It’s Really Called

Who said Cara Delevingne shouldn’t stroll across the Thames on Tower Bridge?

A phone booth. Because London.

More like this
Here Are All 703 Outfits Rachel Wore On Friends
By Kat George
The Best Heels For Bunions, According To A Podiatrist
By Margeaux Baulch Klein and Maria Cassano
Jennifer Lopez's Holiday Pedicure Has The Most Glam Snowflake Design
By Olivia Rose Ferreiro
The Definitive Guide To Every Real Housewife Beauty Brand
By Audrey Noble
Get Even More From Bustle — Sign Up For The Newsletter