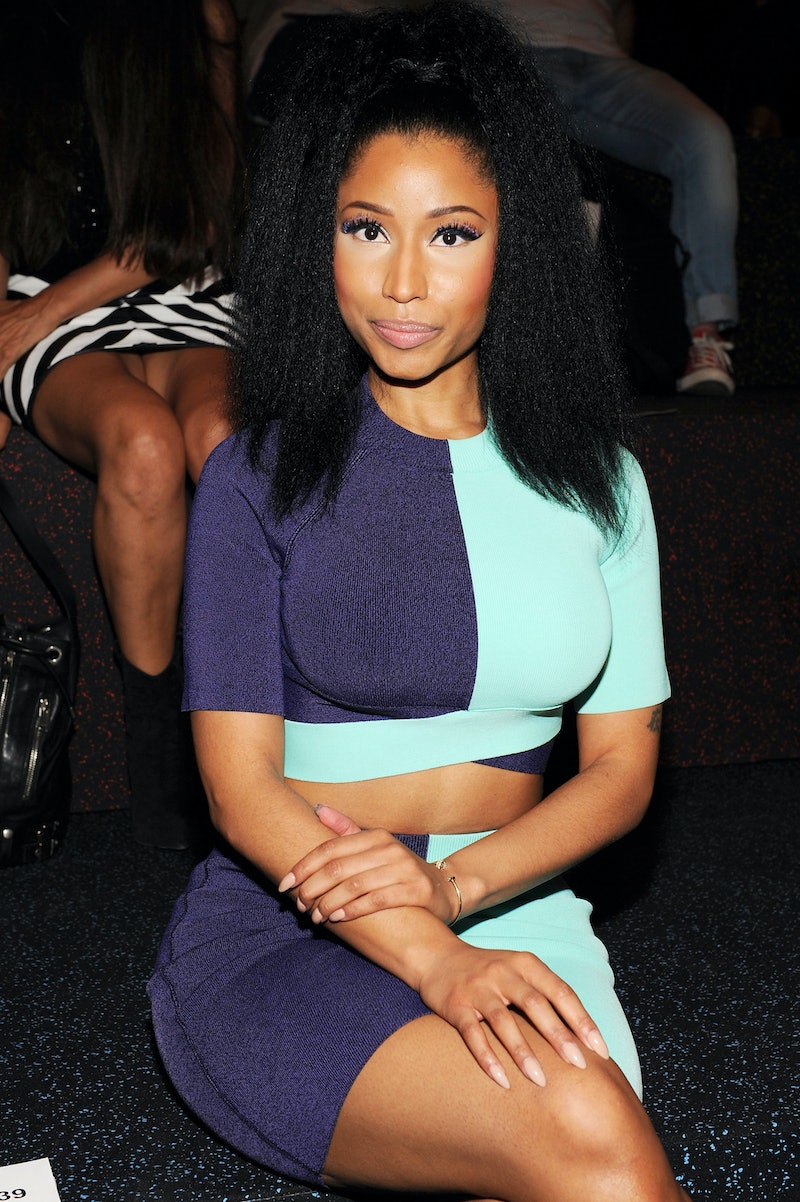 To talk about Nicki Minaj's butt, or not to talk about it — that is the question. Whether 'tis nobler to suffer her PR team's wrath by asking butt-related questions or take arms against that impossible request and ask Minaj anyway. One of GQ's writers was having a serious existential Hamlet-esque dilemma when she was told she couldn't discuss the subject of Minaj's twerking bottom while she was interviewing her in the dressing rooms below Brooklyn's Barclays Center. A very tired Minaj was getting ready to rehearse for New York Fashion Week's Fashion Rocks event and she was not going for the probing butt-related (I'm so sorry for that) questions. As evidenced by November's GQ issue, Nicki Minaj doesn't want to talk about her butt because she claims her hit music video "Anaconda" has nothing to do with that.

In the article aptly named "Cheeky Genius," Minaj was both praised for her powerhouse female mogul status and basically disrespected when the interviewer would not drop the topic of butts — specifically, Minaj's own butt. While Minaj doesn't own up to "Anaconda" being all about that bass, the writer could not wrap her head around the fact that she refused to discuss it.

No, she says, it's just a song, there's no hidden meaning, no layer beneath. "She" — Nicki's character in the video — "is just talking about two guys that she dated in the past and what they're good at and what they bought her and what they said to her. It's just cheeky, like a funny story." Cheeky. She has to be messing with me.

But Nicki shakes her head: "All it says is, 'My anaconda don't.' "Why are we talking about asses? she seems to be saying. Sure, there is a direct, not inferred, reference in her lyrics to "salad tossing" — which, to be clear, is the act of being anally probed by someone else's tongue. But this is a song about reptiles. Don't be such an intellectual!

I don't know about you guys, but I just got schooled on what "salad tossing" actually means. And I also am conflicted about Minaj's response to being asked about her buns, which are so prominently featured in her latest album's cover art and the "Anaconda" music video. The song samples Sir Mix A Lot's "Baby Got Back." How can it not be about butts? I mean, how do you look at this and think "Nope, totally not about butts! Butts don't factor into Minaj's thought process at all! Minaj has a butt, but nope, she's not always thinking about it!"

A quick glance through the many photos of Minaj online reveal that the over the shoulder pose is a favorite of hers. And while many celebs opt for that pose, isn't it saying something about showing the booty off? Not to mention the first time I explained the "Anaconda" video to someone, I told them all I thought about was the sample and how amazing Minaj's assets looked. It took a few more viewings to actually hear the lyrics. I was blinded by the ass, and it seems so was the interviewer.

She sees me grasping, and maybe she feels a little sorry for me, so she offers me this: "I think the video is about what girls do." She is poking at a salad that hasn't been tossed. (The dressing came on the side.) "Girls love being with other girls, and when you go back to us being younger, we would have slumber parties and we'd be dancing with our friends."

Minaj later reiterates what she's been saying all along with, "I don't know what there is to really talk about. I'm being serious. I just see the video as being a normal video." It's pretty interesting to me that an article specifically instructed to not discuss the most talked about part of Minaj's anatomy, does just that for over 1200 words. I know this because I used Microsoft Word to count. There were 1200 words discussing something that Minaj no longer wants to be the focus of her life.

I understand where the interviewer was coming from. How can you discuss Minaj without discussing something we all associate with her? Her songs and delightfully over-the-top outfits keep her relevant and keep the millions rolling in. But her butt is what everyone is talking about. The urge to talk to Minaj about her body and how she uses it to keep making that money and keep social media wrapped around her finger is all too tempting. She's created an empire out of supreme talent in a male-dominated field, but she's also sexual on her own terms and uses her body, lyrics, and photo shoots to express her sexuality, which she unforgivingly owns completely.

However, she doesn't want to talk about the butt. You might say it's always the "butt" of the joke when it comes to articles about her, but it's her right to not want to talk about it, as confusing as that may seem. She knows what her art is about, she doesn't need the media to hound her about this one thing that she doesn't consider a topic worth of note. The GQ interview gets summed up with:

I had been warned before the interview that I shouldn't ask about her ass, that she finds it degrading, and I had chalked up her reticence to that. But maybe this is what she finds degrading: to work day and night to get those features down, to make actual magic and to make it come out in full articulation, every syllable, every accent, meticulously applied to save someone else's song in the third act, to entertain you, only to have some asshole come down to the DeKalb dressing room in the two hours that she could have spent taking a real nap, not an upright one, and ask her what she means when she's doing the thing she does.

Doesn't that just defeat the purpose of the whole article? Instead, let's talk about how amazing she is and how her fame is the result of being the baddest bitch (said with love) in the game right now. Her booty is formidable, and it's tempting to focus on that, but it's not the sum of all of her parts. It's just one part. It's a great part, but one she's not interested in talking about right now. This article missed the mark on respecting that. Basically, GQ, just let her live.